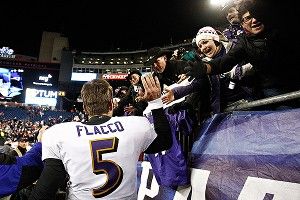 My friend Garrett, of Boston, has been calling Ravens QB Joe Flacco “FlaccoLOL” all year. Every one of those Bad Joe Flacco Games this season, with the zero touchdown passes and zero completed passes and fumbles everywhere, is followed soon thereafter by a stupid text message from Garrett about “FlaccoLOL” and how he sucks and is not an Elite Quarterback. “FlaccoLOL” — is this a funny name? No. Well, it’s fine.

As a Marylander, I’m used to this sort of unfunny abuse from our breathless national treasures to the north, the Massachusetts sports fans. And while they’ve usually gotten the upper hand, nothing’s better than seeing them called out, beaten, and sucking for air. So when Garrett suggested I trek up to Foxborough for the AFC Championship — “You could crash in our guest room and cry into your FlaccoLOL jersey” — what else was a starving freelance writer to do other than spend hundreds and hundreds of dollars for the possibility of schadenfreude?

Foxborough, Massachussetts, is a small town best known for its local seasonal crop — traffic. You get off the exit for Gillette Stadium, and the lush local produce is everywhere. You’re part of it! You get right off the exit, folks, and you sit in your car without moving for two or nine hours until, eventually, the car finds itself on a dirt field, where, for $40, you have permission to cook your meat over fire and get drunk.

During our tailgate, Garrett from Boston hoisted a metal pole with both the American and Irish flags waving violently in the wind. The pole instantly fell, but landed on a couple of foldable chairs, saving us from besmirching the honor of Massachusetts’ two nations.

Gillette Stadium, a fantastically vulgar late-capitalist construction, is attached to an outdoor shopping mall with a Victoria’s Secret and an Old Navy and a bunch of other dumb stores that no one was shopping in. We got our tickets at the nearby Radisson, where StubHub had set up its table for separating fools from their money.

Within 20 minutes of the start of the game, a fan two rows in front of me had puked the entire contents of his belly onto the cement ground and was escorted out.

Each of the many thousands of Patriots fans I saw at the game, heard on talk radio, or narrowly dodged at the tailgate or weird outdoor mall used the same word when asked about the Ravens: MAHDAHRAH. How can the Ravens fans root for this MAHDAHRAH Ray Lewis? He FREAKIN’ MAHDAHED TWO GUYS, YOU KNOW THAT?

The other thing they say to no end: “FLACCO, FLACCO, FLACCO.” It’s supposed to be a neener-neener type jeer, but this time it backfired. As the third quarter wore on, and Flacco drove the Ravens up and down the field, the jeers felt that much more regrettable. “FlaccoLOL” never seemed less funny.

Oh, we Ravens fans say some dumb things, too — most notably an “O, O O O O O O,” cheer sung to the White Stripes’ “Seven Nation Army.” I mean, it’s not that good of a song. But it sounded pretty fantastic when sung en masse around 10:30 p.m., after the departed Patriots fans had ceded Gillette to the thousands of Ravens fans marching buoyantly through its corridors. (One elderly, irate Patriots fan was trying to earn re-entry to Gillette after hearing this, presumably to take on all of Ravens Nation with his two fists. Security would not give him the chance.)

And then it was back to the fertile traffic fields of Foxborough, where we lit a fire on the dirt field for a few more hours for the entertainment of the immobile cars. Garrett, the poor guy, was glum. All that trash talk, and for what? Only to see FlaccoLOL officially earn his stripes as an Elite Quarterback, in person.

Someone was setting a chair on fire a hundred or so yards away on the dirt ground. Garrett ran over to look and came back with some firewood he’d found abandoned nearby. We’d been lighting paper bags and toilet paper by that point. “CAN YOU BELIEVE THIS FIREWOOD? THIS IS GREAT!” Garrett was happy. And so was I.

The Designated Player: At the MLS Draft Combine