We Went There: Knicks-Celtics Bring the Rumors and Melodrama at North Station 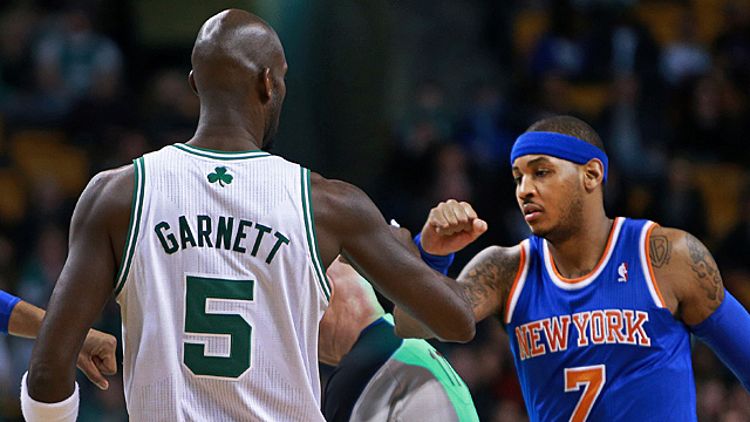 Just four days after their red, white, and blue football team was squeezed out of the NFL playoffs, Boston’s sports fans rose from the ashes and reassembled to hoot and holler once more. This time greenly clad underneath L.L Bean parkas and North Face fleeces, they converged upon their city’s train station gymnasium to watch their struggling basketball team. They came from Somerville and Worcester and Dorchester and Charlestown. Some scraped the ice off their windshields and drove down I-95 from Maine or New Hampshire; but most of them, unaware of their participation in an accidentally profound metaphor, arrived via an aged, rickety, and only somewhat reliable Green Line trolley car.

The Knicks were in town for what, under normal circumstances, would’ve been a key divisional game. But the circumstances were not normal, and although 22 men played on the parquet last night, the narrative was structured around just two of them. Rumor has it that two weeks ago, down in Manhattan, one of the men had said to the other that his woman tastes like a blend of whole grain oats, sugar, modified corn starch, honey, brown sugar syrup, salt, tripotassium phosphate, canola and/or rice bran oil, and natural almond flavor. These words provoked violent urges within the other man. It also provided last night’s giggly backstory and melodrama.

The mood in the Garden lacked a cohesive energy. It was equal parts silly Cheerios stuff, key divisional matchup, and holy shit, it’s cold outside. And although Boston fans love to mercilessly taunt opponents — and this game was tailor-made for that — there was less goading of Carmelo than expected. Maybe because the Celtics are struggling; losing in Cleveland and Detroit in their last two games doesn’t exactly breed the kind of Ubuntu swagger that fuels aggressive taunting. Maybe it’s because the city is still down from the AFC Championship. Maybe it’s because it’s so drastically cold that we can hardly move, let alone boo or make up stupid honeybee chants. Regardless, the game went on and turned out to be a pretty indicative Atlantic Division showdown. Each team looked mediocre. Each team looked old.

For all the talk of KG, Melo, and the cereal, the first half was really about the Truth. Paul Pierce attacked his way to 19 first-half points, and you could tell he wanted this game. For those first 24 minutes, Pierce looked liked the aggressive scorer the Celtics so desperately need.

Pierce practically disappeared in the third — attempting just one field goal, a missed 3-point attempt. All that aggression and energy on display in the first half was gone. Early in the fourth, he found himself isolated on Pablo Prigioni but couldn’t score, pivoting and spinning his way into a flat 16-foot jump shot that rimmed out. On the following possession, he missed an illegal defense free throw. The next time down the floor, he got fouled in the act and made both free throws. The Knicks were up 8 with 7 minutes left, but there was still optimism in the stands.

When they played “Eye of the Tiger,” the Celtics were down just 5, and they had the ball with 1:13 remaining. Pierce inbounded the ball to Jason Terry, who quickly tried to pass it back, but there was confusion and Pierce couldn’t handle the pass, knocking the ball out of bounds. Turnover. Pierce looked gassed and frustrated as he stood ironically atop the NBA FIT court decal. But the Celtics would get one last chance, down 3 with the ball and 13.1 seconds left. The play again was for Pierce and again — unbelievably — he knocked the ball out of bounds in almost the exact same spot. Pierce looked dejected as he walked by that same stupid decal. Two key possessions. Two key turnovers. Final Score: Knicks 89, Celtics 86. They played “Thunderstruck” and we all left. We bundled up and headed back to that old slow Green Line.