We Went There: Gennady Golovkin vs. Gabriel Rosado 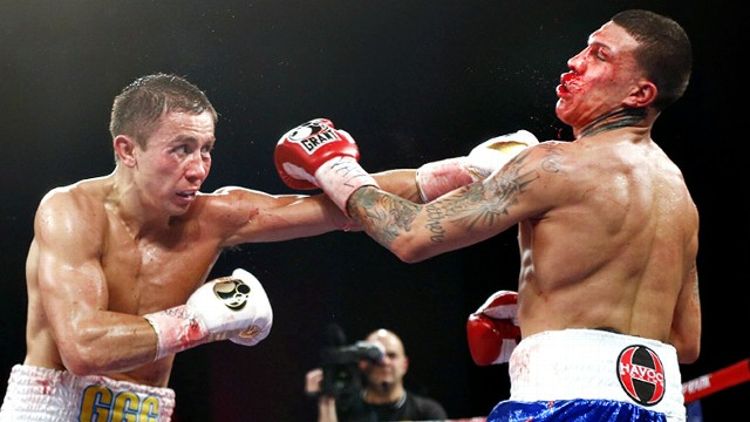 Gennady Golovkin, the middleweight champion boxer from Kazakhstan, has entered a strange stage in his career. He is still largely unknown to the American audience, but he has been so wildly hyped within the boxing community that one almost expects him to punch a hole clear through his opponent’s head whenever he fights. Anything less is a letdown.

By the end of Golovkin’s seven-round TKO victory Saturday night at Madison Square Garden, he had won every round. He’d made his opponent, Gabriel Rosado, look like he’d just starred in a reenactment of the blood shower scene from Carrie. Golovkin’s punches had opened a deep gash above Rosado’s left eye and had more or less exploded whatever soft tissue had been inside Rosado’s nose. His blows had spattered blood onto the ropes, onto the lenses of HBO’s ringside TV cameras, and onto the side of Rosado’s trainer’s face. Golovkin had handed out so much punishment that moments before the end of the fight, Rosado’s trainer turned to the fighter’s father and said, “I gotta stop it. Your son’s gonna die, man!”

Yet when HBO’s Max Kellerman entered the ring to interview Golovkin after the fight, he asked, “No knockdowns! What gives?” Earlier, before the carnage in the ring turned into something you might see in a Fangoria pictorial, Kellerman even suggested that other middleweights might be watching the fight and thinking that Golovkin — who was not getting beaten — looked beatable. So what gives?

Well, over the past year Golovkin has become known as perhaps the most avoided fighter in boxing, a title previously held by fellow middleweight titlist Sergio Martinez. Kellerman has routinely called him a “monster,” Twitter cannot stop calling him a “beast,” and as recently as last week, Grantland called him a “cyborg.” Boxing websites and message boards are filled with tales of Golovkin’s fearsome work in sparring, where he has supposedly given hell to junior middleweight and middleweight stars like Saul “Canelo” Alvarez, Peter “Kid Chocolate” Quillin, and Alfredo “El Perro” Angulo. Somehow, even though Golovkin has fought only twice in the United States and most sports fans haven’t a clue who he is, the Kazakh champ has become one of the most buzzed-about figures in boxing.

Actually, that makes sense. Boxing is treated as a subculture in the American sports scene, and the fans who build the hype around fighters like Golovkin — the ones who will spend time digging up YouTube clips from his amateur career and debating on East Side Boxing how he’d fare against stars like Canelo or Sergio Martinez — are obsessives. They’re not much different from film buffs who’ve memorized every frame in Blood Simple or underground hip-hop nerds who trade MP3s of classic freestyles from the Stretch Armstrong and Bobbito radio show. As is often the case with collector personalities, each boxing fiend wants to know more about the sport than any other boxing fiend. Who has seen more fights? Do you know the names of the best up-and-coming fighters? Do you know the names of their trainers? Do you think this current featherweight champion is more like Saddy Saddler or Willie Pep? Trick question, dumb-ass! Today’s featherweights aren’t cut from the same cloth. Have you read every word A.J. Liebling ever wrote on boxing? What about Pierce Egan’s 19th-century mini-encyclopedia Boxiana? In its entirety?

Obscurity is a form of currency in boxing fandom, and Golovkin pushes a lot of the right buttons for the true diehards. He is from Kazakhstan, a country hardly anyone who is not from Central Asia or the countries of the former Soviet Union knows much about. (That lack of knowledge is further obscured by the fact that the most famous Kazakh in the United States — Sacha Baron Cohen’s Borat — is not Kazakh at all.) Golovkin has knocked out 22 of 25 opponents in his undefeated professional career. He knocked out former super middleweight champion Lucian Bute when they were amateurs and fighting with headgear. His power looks fluid and natural, yet there’s also something mysterious about it. He doesn’t swing wildly or lunge or visibly load up on his shots. He just lets his hands go and opponents get rocked. The knockouts, the power, the “hailing from parts unknown” mystique, the big-name opponents who supposedly won’t face him — it’s all catnip to the “fight freaks.” Because if and when Golovkin ever breaks through against a star opponent and gains renown as one of the sport’s top fighters, they’ll all be able to say, “I told you so.”

I also think boxing fans can smell some crossover potential in Golovkin. Yes, his English is shaky and he’ll probably never fill the MGM Grand Garden Arena in Las Vegas with 15,000 bloodthirsty Kazakhs, but you can sense his charisma. Like Manny Pacquiao, Golovkin radiates a happy-go-lucky aura that contrasts with the mayhem he causes in the ring. He smiles and nods when he gets hit, lets out an occasional amused shrug after battering an opponent, and performs a dainty, ballet-inspired bow to the crowd after he wins. Like Pacquiao in his early HBO fights, Golovkin fearlessly rumbles through post-fight interviews in English, generating odd translations like the way he kept calling Rosado a “good boy” Saturday night. Golovkin has an outside chance of creating a moment as spontaneous and bizarre and glorious as Pacquiao’s 2006 Cleto Reyes/clitoris interview. Finally, Golovkin wears the best robe in boxing — a resplendent dark blue number with intricate gold embroidering, like he visited the finest rug shop in Kazakhstan and then took his purchase to the finest tailor. The guy is an exciting fighter, but he is also a character.

By the time the bell rang to begin Round 1 of Golovkin’s bout with Rosado, the insider buzz around the champion had swollen so much that it was ready to burst. Golovkin’s name was being bandied about like he was Keyser Söze. Yes, he dominated Rosado and hurt him very badly, but he never knocked him down, never knocked him out. Plus, despite coming into the fight with an impressive seven-fight winning streak, Rosado was still considered a second-tier junior middleweight, and he was coming up in weight to challenge Golovkin. Plus, not only did Rosado stay on his feet (in one of the most gruesome displays of bravery I’ve ever seen), but he also managed to tag Golovkin a few times with hard right-hand counterpunches and sharp uppercuts. The punches weren’t enough to win rounds or draw more than an occasional nod of acknowledgment from Golovkin, but they were enough for boxing blogs like the Queensberry Rules to conclude that “Golovkin, it turns out, is human.” The myth of Golovkin had grown to the point that forcing his opponent’s trainer to yell “Your son’s gonna die!” before throwing in the towel was deemed unimpressive.

So let’s dead the myths. Yes, Golovkin seems unconcerned with defense and easy to hit, and someday a big-punching opponent may make him pay for it. Both Rosado and Golovkin’s previous opponent, Grzegorz Proksa, landed flush power shots against him. (Then again, both were stopped within seven rounds.) On top of that, Golovkin’s face seems to swell easily — a mouse developed under his left eye after Rosado landed his first clean blow of the fight, and Golovkin’s face puffed up some against Proksa. Because of the swelling, observers might overestimate the damage caused by the punches that land against him. Golovkin is not as fast as top pound-for-pound fighters like Sergio Martinez and Andre Ward, who he hopes will someday be persuaded to face him in the ring. Golovkin is not flawless, and he’s been so dominant and so avoided that he still seems untested. But it’s hard not to believe in Golovkin’s power or to be impressed by his composure — the way he stalks opponents, cuts off the ring, keeps them on the defensive, and keeps working them over until they go down or, in Rosado’s case, are so damaged that they can’t continue.

Sure, you’d have to be blind or delusional to say Golovkin would dominate and walk through fighters as swift and slippery and deadly as Martinez and Ward. Then again, you’d be almost as crazy to think that Golovkin, with his aggression and footwork and power, doesn’t have it in him to test those champions like never before.