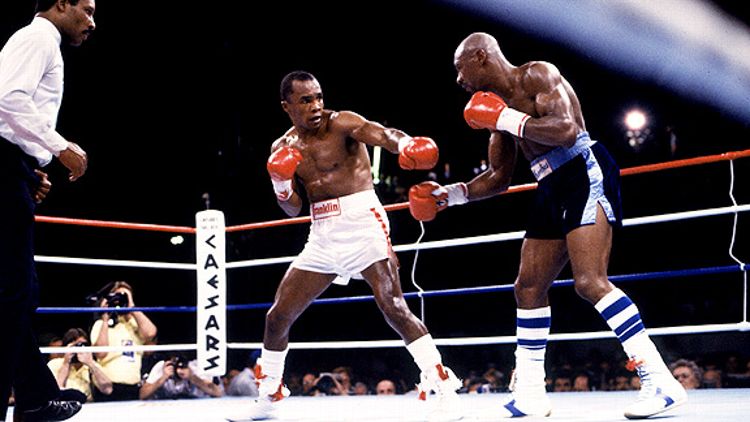 If you’ve already read about the 1987 middleweight championship fight between “Marvelous” Marvin Hagler and “Sugar” Ray Leonard, you should spend a few more minutes watching the actual bout. Be warned: Watching this fight may leave permanent scars on your psyche. If you’re anything like my father, you’ll spend the first 30 years of your son’s life intermittently muttering, “Hagler was robbed.” Here’s the first installment on YouTube. We’re going to embed the final round, not just because it’s dramatic, but also because the video begins with Gene Hackman’s enthusiastic cheering for Leonard.

While we’re at it, let’s take a look at a few other classic moments from the series of 1980s fights between Hagler, Leonard, Tommy Hearns and Roberto Duran. Round one of this Hagler-Hearns fight may be the most action-packed three minutes any of the four boxers fought against each other — hell, it might be the most exciting three minutes of boxing ever.

Duran, who beat Leonard in their first meeting, is better known for quitting midway through their rematch. Here’s the infamous “No mas” round.

Looking at today’s boxing landscape, it’s hard to imagine four all-time greats risking their belts and reputations in a series of brutal encounters in which each fighter lost at least once. But let’s not get too nostalgic. At least today, boxers promote their fights with singing competitions on Mexican variety shows.

Rafe Bartholomew is an editor at Grantland and author of Pacific Rims: Beermen Ballin’ in Flip-Flops and the Philippines’ Unlikely Love Affair with Basketball. Follow him on Twitter at @rafeboogs.

Filed Under: Boxing, Rafe Bartholomew, Things On the Internet