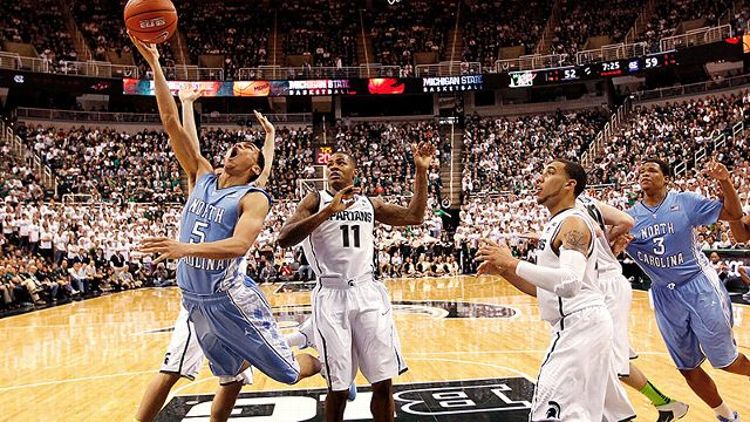 I should probably say up front that I’m horribly biased as a lifelong UNC fan, but if anything, my bias this year translates as all sorts of negativity and rock-bottom expectations. This made last night’s win at Michigan State even more bizarre.

All offseason long, I’ve been asking fellow UNC fan Jay Kang, “Why is every other college coach building around superstars except ours? Did Roy forget how to recruit? How are we going to survive another year of watching James McAdoo and Marcus Paige? Will Duke and Kentucky beat us by 30? Can we grandfather Kendall back onto the roster?”

Then, sobbing softly, typing a Gchat to nowhere:

“Why did Kendall have to break his wrist two years ago???”

Basically, UNC basketball turns me into the worst person on college message boards. It is what it is. But since the offseason, things have changed. That starts with point guard Marcus Paige, who’s been worlds better than he was for most of last year.

The best thing that’s been written about Roy Williams’s tenure at UNC is still this Kang piece from a few years ago. Especially this:

… the Heels are all about Roy’s system, and because Roy’s system has never been anything but run, run, and when you’re tired, run some more, the player tasked with all that running becomes the focal point of the offense. To stretch the metaphor a bit further than it should probably stretch, the point guard at Carolina is both the driver and the engine. … The point guard for North Carolina is the single most important position in college basketball. When Roy has a good one, the team wins national championships. When Roy has a bad one, the Heels are barely a tournament team.

This was proven out in the NCAA tournament that year (Kendall Marshall injury … sobbing, again) when UNC went from a title contender to a team that was barely surviving Ohio. And this year, the miracle of actually-pretty-good Marcus Paige has given an otherwise underwhelming UNC team a shot to compete with anyone. In the past two weeks they’ve beaten no. 3 Louisville and no. 1 Michigan State. Because of a thin, young roster, they can also lose to anyone — as we saw with losses to UAB and Belmont in that same span.

This is how UNC’s season will go, especially with P.J. Hairston and Leslie McDonald out indefinitely. There are no lottery picks here, but there will be games that convince fans that this team can shock everybody. Then others that bring it all back to earth. But watching the Michigan State game expecting a blowout, it turned into a good reminder of why college basketball has always been awesome.

Or, to be more specific, watching rail-thin guys like Brice Johnson and Marcus Paige outplay All-Americans was mostly just surreal. It was this video of the team and fans going apeshit that reminded me why college basketball is awesome:

I love the NBA, but that doesn’t happen after a December NBA game.

So Wednesday was a fun little reality check. There are more great teams in college hoops this year than in the past few seasons combined. Arizona has a murderous lineup, Kansas has more NBA talent than anybody in the country, Kentucky is Kentucky, Jabari Parker is Carmelo 2.0, and on and on. Michigan State is as loaded as any of them. Titus outlines all of it in this week’s power rankings. Because of all the talent, a ton of people are watching college hoops like amateur NBA scouts.

Someone like Marcus Smart plays for Oklahoma State, but it’s almost like he’s also playing against Jabari Parker and Andrew Wiggins all year. (I’m as guilty of this as anyone.)

This isn’t a hot take about ragtag college kids beating back the selfish me-first superstars and reminding everyone what this sport is all about. It’s the spike in NBA talent that makes college hoops more entertaining than it has been in years. You need great players and great teams to get people interested.

But watching them lose can be just as fun, especially as the stakes get higher. Just look at Auburn-Alabama, the most insane sporting event of the year so far.

When everyone is 19 and 20 years old, crazy shit will happen as a rule. That’s why college sports have always been great. And if future superstars and current college superteams are the crack that gets people hooked this year, it’ll be just as much fun watching the teams of ordinary college players that end up beating them.

Or to put it differently: Someone like Marcus Smart is awesome, but watching Marcus Paige has been just as much fun.

As a fan who spent all summer whining about the coach who hasn’t recruited any future NBA superstars, I’m as shocked as anyone.