Unanimous Animus: The LeBron James MVP Vote and Debunking the Myths of ‘Value’ 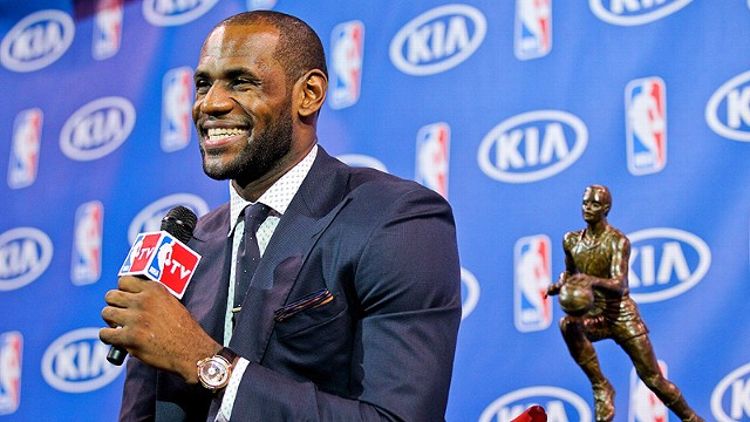 The mystery is solved: Gary Washburn, the very fine Celtics and NBA beat reporter for the Boston Globe, a skilled veteran of this business, has outed himself as the lone voter to select someone other than LeBron James as this season’s Most Valuable Player. Washburn voted for Carmelo Anthony, and he explains his reasoning today in the Globe. I’d encourage you to read the whole thing, since Washburn found out Sunday he’s a lone outlier, and since the Globe deserves your clicks and your subscriptions after its outstanding coverage of the Boston Marathon bombing. But the crux of Washburn’s reasoning appears in these three paragraphs:

Anthony led the league in scoring average and basically carried an old Knicks team to the No. 2 seed in the Eastern Conference. Amar’e Stoudemire missed most of the season with knee issues, Raymond Felton missed six weeks, and Tyson Chandler dealt with nagging injuries, leaving Anthony, J.R. Smith, and a bunch of lottery picks from the mid-1990s to win 54 games and beat the Miami Heat three times.

So my vote had more to do with Anthony and less to do with the dominance of LeBron. If you were to take Anthony off the Knicks, they are a lottery team. James plays with two other All-Stars, the league’s all-time 3-point leader, a defensive stalwart, and a fearless point guard. The Heat are loaded.

If LeBron was taken away from the Heat, they still would be a fifth or sixth seed. He is the best player of this generation, a multifaceted superstar with the physical prowess of Adonis, but I chose to reward a player who has lifted his team to new heights.

This gets back to the word “valuable,” an amorphous concept that encourages voters to dig deep into roster context, team identity, and other team-by-team quirks that often make a star player more valuable because of the particular realities in which he functions. As a reminder, I don’t have an awards ballot, though I gave James my fake MVP and argued last month that he deserved the award unanimously. I won’t reiterate the pro-LeBron argument here.

But I will take issue with three points: one Washburn did not mention, and the two that are the key pieces of his pro-Melo argument.

That amounts to nearly 20 percent of the season, and represents the most games missed by any realistic MVP candidate. Only Chris Paul, who missed 12 games, is really close. James missed just six games, and most of those came at the end of the season, after Miami had already clinched the league’s best overall record.

You can’t make a case for Anthony without at least acknowledging this gap in his candidacy. When you’re choosing between the very best players in the league, every factor counts, including missed games. Only one player has ever won the MVP playing in so low a percentage of his team’s games: Bill Walton, who played just 58 of 82 games for the 1977-78 Blazers.

2. “If you were to take Anthony off the Knicks, they are a lottery team.”

That’s a very meaningful gap. Anthony had a very good season, and I ranked him at no. 4 on my fake ballot — behind James, Kevin Durant, and Chris Paul. (I’d encourage you to read that if you, crazed New York fan, are taking this as some anti-Melo screed. I go on and on about Melo’s newfound efficiency and his foundational importance to New York’s small-ball identity.) But that plus-3.2 figure would still have ranked 10th among all NBA teams, and behind only Miami and Indiana in the Eastern Conference. It is the point differential of a very strong playoff team.

That alone does not disprove Washburn’s claim that New York would be in the lottery without Anthony. A good chunk of the non-Melo New York minutes, when the Knicks maintained that strong plus-3.2 scoring margin, came against opposing second units (or at least mixed starter/bench units), and it’s very possible New York would have suffered much more than these numbers indicate had Melo missed considerable time. Anthony’s longest continuous absences came in two three-game stretches during March, and the Knicks went 3-3 over those six games, with a one-point loss to the Thunder among the defeats.

Various iterations of the Knicks over the two seasons before this one showed they could survive at a .500 or better level without Anthony by shifting into a spread pick-and-roll attack. The Linsanity era coincided with Melo’s longest injury-related absence of his New York career, and the Knicks were famously 28-26 behind the Raymond Felton/Amar’e Stoudemire pick-and-roll before New York dealt for Anthony ahead of the 2011 trade deadline. That was among Stoudemire’s finest half-seasons, and it’s tempting to argue that the Knicks of today could not win that way with Stoudemire missing most of the season due to injuries. But these Knicks also have Tyson Chandler, one of the league’s very best pick-and-roll finishers, a dunk machine who sucks in opposing defenses and opens up perimeter looks for his shooters.

All of this gets into the realm of hypotheticals, and that’s sort of the point. We have no clue if New York would be a lottery team sans Anthony, and if you are going to posit they would be, you have to marshal at least some evidence. And the evidence we do have indicates they may well have been a solid no. 7 or no. 8 seed without him.

3. “If LeBron was taken away from the Heat, they still would be a fifth or sixth seed.”

Problem no. 1: We have no idea if this is actually true, in either direction. But get this: Miami outscored opponents by 14.1 points per 100 possessions with James on the floor and had a negative scoring margin when James hit the bench. That’s right: The mighty Heat got outscored when the world’s best player hit the bench.

This isn’t necessarily conclusive of anything, including that Miami would be an also-ran without James. Swap out James, and Miami would use its cap flexibility to snag an average player in his place, rejigger its rotation to include more Dwyane Wade/Chris Bosh minutes, and redesign its entire offense. But James is of bedrock importance to Miami in the same way Anthony is to New York, only he’s rather clearly better at every single aspect of basketball. Both enable their teams to play powerful small-ball lineups, but James is light years ahead of Melo as a passer and a defender.

Problem no. 2: Even if Miami would finish as a midtier playoff team without James, and not in the lottery, that is not evidence that James is somehow undeserving of the MVP. This is where the murky concept of value goes awry. Winning 66 games is extraordinarily difficult; only 13 teams have pulled it off in league history. Pushing a 48-win team to that historically elite level might be more difficult, and thus more valuable, than pushing a 40-win team to 50-plus wins. (The same might be true, by the way, for someone who pushes a 15-win team to 35 wins, even though said player would get zero consideration for the MVP.)

On a very basic level, the gap between the Heat and the no. 5 or no. 6 seed — the gap Washburn cites — was larger than the gap between the no. 2-seeded Knicks and the lottery. Miami won 21 more games than the fifth-seeded Bulls, and 22 more than the sixth-seeded Hawks, and they did so even while coasting through the last 10 games of the season. New York won “only” 16 games more than the eighth-seeded Bucks. The distance between “great” and “blah” may well be greater in this season, and in others, than the distance between “solid playoff team” and “lottery team.” Adding wins on the high end should count for just as much as adding wins on the low end, and if you care about such things, James led the league in every “wins”-related advanced stat I could find — win shares on Basketball-Reference.com, and both Value Added and Estimated Wins Added among the advanced John Hollinger stats.

Look, it’s no big deal in the scheme of life that James didn’t win unanimously. But I’ve yet to read any convincing evidence that he shouldn’t have done so.