Tyler, the Enrager: The Raptors Forward Plays the Heel 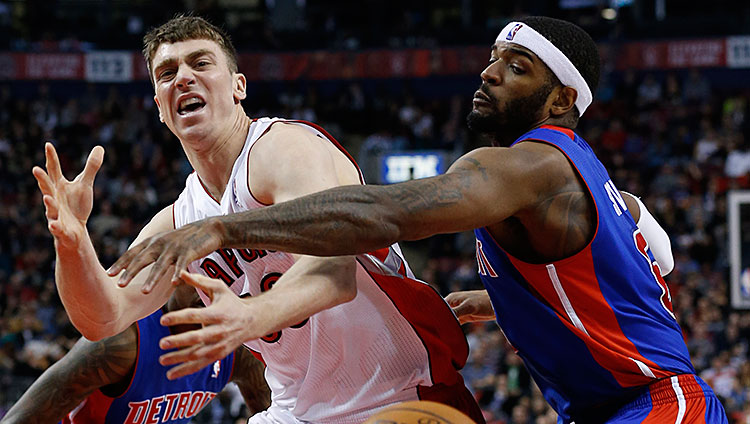 Saturday night in Anaheim, Frank Kaminsky put the Wisconsin Badgers on his back (figuratively) and carried them past Arizona and into the Final Four. Kaminsky was terrific and ended up with a whopping 28 points and 11 rebounds, numbers not seen in a regional final since Tyler Hansbrough had 28 and 13 back in 2008 to help North Carolina topple Louisville.

Given his current role, it’s hard to remember just how dominant Hansbrough was back then. He was a force in Chapel Hill for what seemed like 10 years. He won a national championship and set a ridiculous amount of records, including the ACC scoring mark and the NCAA made free throws mark.

Hansbrough may have been the face of college basketball his senior year at UNC, but five years later in the NBA, he’s just another face in the crowd. Superstars rule the NBA — they get the big contracts, they get the big endorsements, and they get the calls on the floor. The best players in the league not only get the whistles, they also know how to get the whistles. It’s a fact: If you look at the list of players most likely to draw a foul, it’s a very logical list, with one incredible exception. 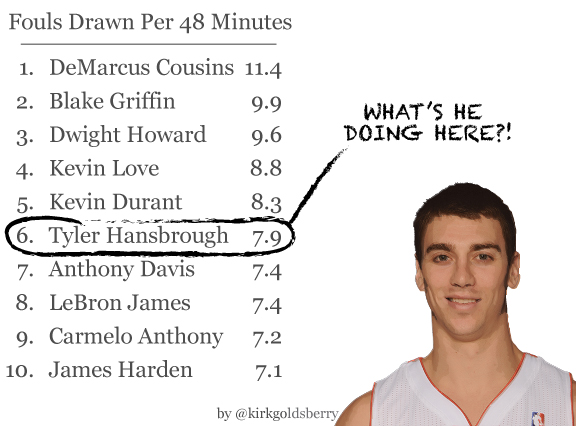 Nine of those 10 guys are among the most feared offensive weapons in the basketball world. They get fouled a lot, mostly because opponents are unable to stop them from scoring without breaking the rules.

Then there’s Tyler Hansbrough, who, despite relatively paltry scoring numbers, remains a foul magnet. You may find that annoying — you may find him annoying — but your resistance is futile. Hansbrough’s scoring and rebounding numbers may seem like those of a role player, but the NCAA’s all-time leader in made free throws is still getting hacked like a superstar.

The hacking of Hansbrough is tough to explain, but some of it has a lot to do with his strange energy and ability to drive his opponents insane.

Hansbrough plays like someone who has been marinating in Red Bull for 24 hours. Maybe he has; that’s none of our business, but something about his tense caffeine stare and his brooding body language drives other NBA players to irrational acts. There aren’t many good reasons to foul him, unlike the other guys on that list; relative to NBA stars, he has limited offensive skills, unless you consider drawing a foul a skill. 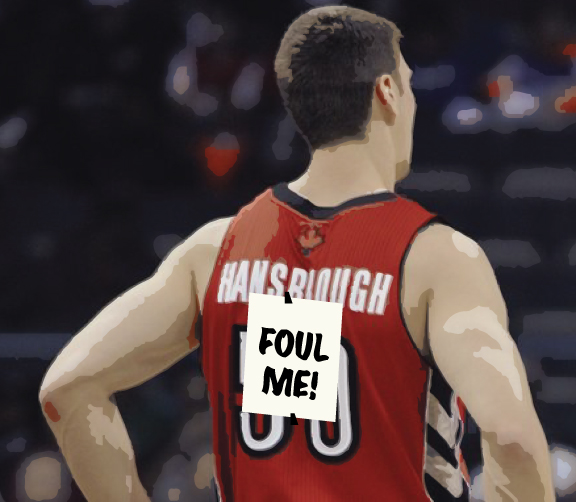 As sad as it is, drawing a foul is one of the best “plays” in the NBA. Generally speaking, any possession that ends in free throws is an above-average NBA possession. In some cases, drawn fouls are as a good as causing a turnover. In other cases, they are as a good as a slam dunk. You could even argue that a drawn foul that results in two made free throws is better than a dunk because it provides the additional benefit of putting an opponent one step closer to disqualification, and helping your team get more future free throws — err … above-average possessions — in the process.

Through this lens, Hansbrough appears savvy, but savvy is not the right adjective here.

Whether it’s intentional or otherwise, he annoys, pesters, and instigates as much as any other current player in the league. It’s not hard to find examples.

Back on February 19, in a game versus the Bulls, D.J. Augustin slipped past Kyle Lowry and tossed up an errant floater. That’s when shit got weird. DeMar DeRozan gathered the rebound near the right block and immediately raced down court. But after his fifth dribble, a whistle interrupted his fast break and he stopped dead in his tracks just past half court. DeRozan turned to see his teammate turning Mike Dunleavy into a tackling dummy.

Like Rodman and Laimbeer before him, Hansbrough is always in the middle of dustups; he is always maddening opponents, distracting them from their primary responsibilities, and luring them into his world. There’s an argument to be made for this kind of thing. If you can take a player out of his game, he is less likely to excel and more likely to flip out. That’s what happened last year when Hansbrough annoyed Will Bynum to the point that Bynum threw a punch and got ejected:

There is also an argument to be made against this kind of thing. Basketball is a beautiful game, and it’s at its best when the best players are on the court. Injuries are a big enough problem in the league, and it’s hard to justify a brand of play that increases the likelihood of somebody getting hurt. Take this painful example from last season. Hansbrough gets entangled with his now-teammate Jonas Valanciunas. Hansbrough ends up whipping Valanciunas to the ground, causing the latter player to wince and grab at his recently surgically repaired right hand.

While Raptors fans may claim to love Hansbrough now, that certainly wasn’t the case that night, last season.

As the Dunleavy incident shows, there are times when Hansbrough’s Buster Keaton antics cross over from high comedy into a realm that threatens the well-being of the performers. And then it’s not funny anymore. And that’s probably why so many guys despise playing against him. Patrick Beverley is walking a similar fine line; everybody loves a tenacious competitor, but nobody likes a reckless jerk. Sometimes those can be mutually exclusive categories, but different people will always draw that line in different places.

Hansbrough deserves credit for moving beyond his All-American NCAA persona and morphing into a functional bench player on one of the top teams in the Eastern Conference. But at the same time — at least to some people — he’s threatening the respect he deserves by trending toward becoming the new goon of the NBA.