Tuesday Night Lights: On the Precipice of Perfection 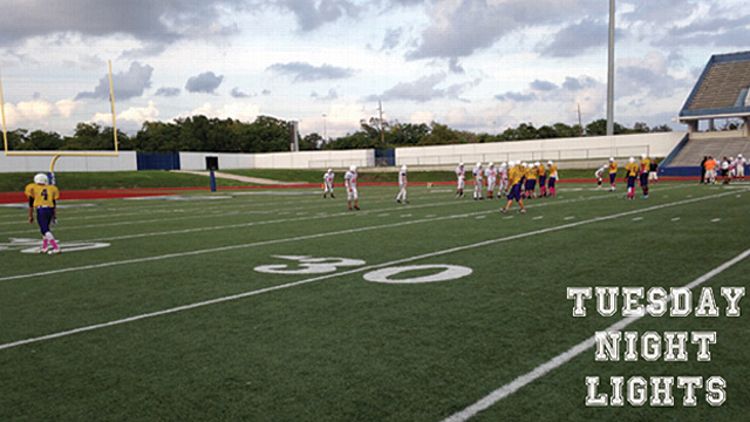 I would like to frame this as a contest more interesting than it was. I would like to write that School J. was surprisingly talented, that our schools were evenly matched, and that wills were tested. I would like to write that, up until the last moments, the game’s outcome had not been decided, and that but for the saving perfection of an end-of-game spiral from The Helicopter into the bank vault–hands of The Would-Be Star in the back of the end zone, we’d have boarded the bus and left our perfect season in tatters. But that just isn’t the case. None of it. Not even a tiny part.

Instead: The game was a crucifixion.

Number of first downs School J. earned: Three, one of which came in the last 15 seconds.

Number of first downs School J. gave up: A billion.

Number of tackles behind the line of scrimmage by School J.: Zero.

Number of tackles behind the line of scrimmage School J. gave up: 600.

Number of completed passes by School J.: Zero. (It only attempted two, and one was intercepted and returned 60 yards for a touchdown.)

Points School J. gave up: A lot, even though we slowed the game down in the second half. At halftime, one of our players asked, “Coach, how many more touchdowns are we allowed to score?” We were up 20-0. “None,” was the response. And we still accidentally scored two.

The Little Running Back: After a skittish start (if you’ll recall, he’s an undersize seventh-grader who has been promoted to the eighth-grade team), he finally found his feet. He is a dynamic runner, and he displayed the entirety of his skill set on a positively holy-crap cutback play. He absorbed the ball from The Helicopter into his chest, then ran wide looking for a hole that wasn’t there. When he saw that what was supposed to happen wasn’t happening, he planted his left foot hard into the turf, sprang up and into the fray of bodies charging his way, then exploded out of the other side for a 10-yard touchdown run. He looked like a motorcycle accelerating through a car wash. He received his high fives and then ran to the sideline. “Coach, did you see that?!” he squeaked at the head coach. “Boy, I put you in the game and then I called the play for you,” Coach laughed back. “Of course I saw it.” It was a neat moment.

The Big Gun: He was a truck. On our first series, he ran it three times, resulting in many, many casualties. He broke one run for a 30-yard touchdown, and I think he tried to make sure he hit every single one of the defense’s players on his way there.

The Helicopter: He is throwing the ball like few middle schoolers do. It’s unbelievable. He passed for 800,000 yards against School J. What’s more, he’s actively finding ways to tilt the field in his favor, which is a large, large, LARGE part of the reason we have not lost this year. Best example: We called a pull play for The Big Gun; he was supposed to get the ball and ride along behind our talented right tackle, except School J. just happened to blitz from that side so it was a no-go. Three steps into his run, The Big Gun saw it, turned around, and attempted to reverse field. He was to be murdered. Except that he wasn’t because The Helicopter saw the dissolution of the play before anyone else. You could hear him shouting, “COME ON LET’S GO” at The Big Gun before flying out in front of him, obliterating attempting tackler after attempting tackler. It was selfless and gorgeous.

Come to find out, this furious bit of altruism was not unexpected. Earlier in the season, The Big Gun made a special point to talk to The Helicopter’s mom about how he got mauled all of last season. “I told her not to worry, that I wasn’t going to let anyone hurt him this season,” is what The Big Gun told me he told her. What world does that sort of conversation even happen in?

The T: He wasn’t able to play last game because of some off-the-field circumstances. He returned this week, though, looking for all the tackles he was owed from last week. He is the most brutal gatekeeper, playing outside linebacker with a very distinct brand of athleticism and confidence. By the end of the second quarter, School J. all but abandoned running to his side of the field.

The Goose: He was on the field during a punt by School J., which rarely happens in middle school football. The ball was kicked, soared up into the air, and he saw it, jogged to it, waited for it, caught it, then stood there. Like, he literally just stood there looking at the ball. He was looking at the football like how a dad looks at his firstborn son. He was looking at the football like it had grown an arm out of its side. Someone from the other team charged over and shoved him down from the back. The Goose popped up off the ground and hustled over to the sideline. I could barely stop laughing. “What happened, son?” I asked. “Coach, I don’t know. I think we should practice more punts. I didn’t know what to do when I caught it. I wasn’t even expecting to catch it, I just wanted to try.” He smiled the whole time. Kids are the best.

The quarterback of the makeshift offense called a play, had it blown up by a defensive lineman, then immediately shouted, “Line down! Line down!” which means the offensive line should hurry and line back up without huddling. Then he shouted, “Ditto! Ditto!” which of course means we’re going to run the same play again. Only the guys on the offense were mostly all in positions they weren’t very familiar with so there was a bit of confusion. One of the receivers hollered, “What’d he say?!” to which the tight end responded with, “He said …” and then unintentionally replaced “ditto” with a word that sounds a lot like “ditto” except it has an L and a D instead of the two T’s. I laughed to myself.

Next week we play School D. They are not a historically winning franchise. We lost to them last year, but that’s because we lost to everybody last year. They are the last school left on The Helicopter’s revenge tour checklist. The only two possible outcomes of the game are that we will win by a fair amount or we will win by more than a fair amount. Our boys are one week away from perfection. Somebody call the ’72 Dolphins.