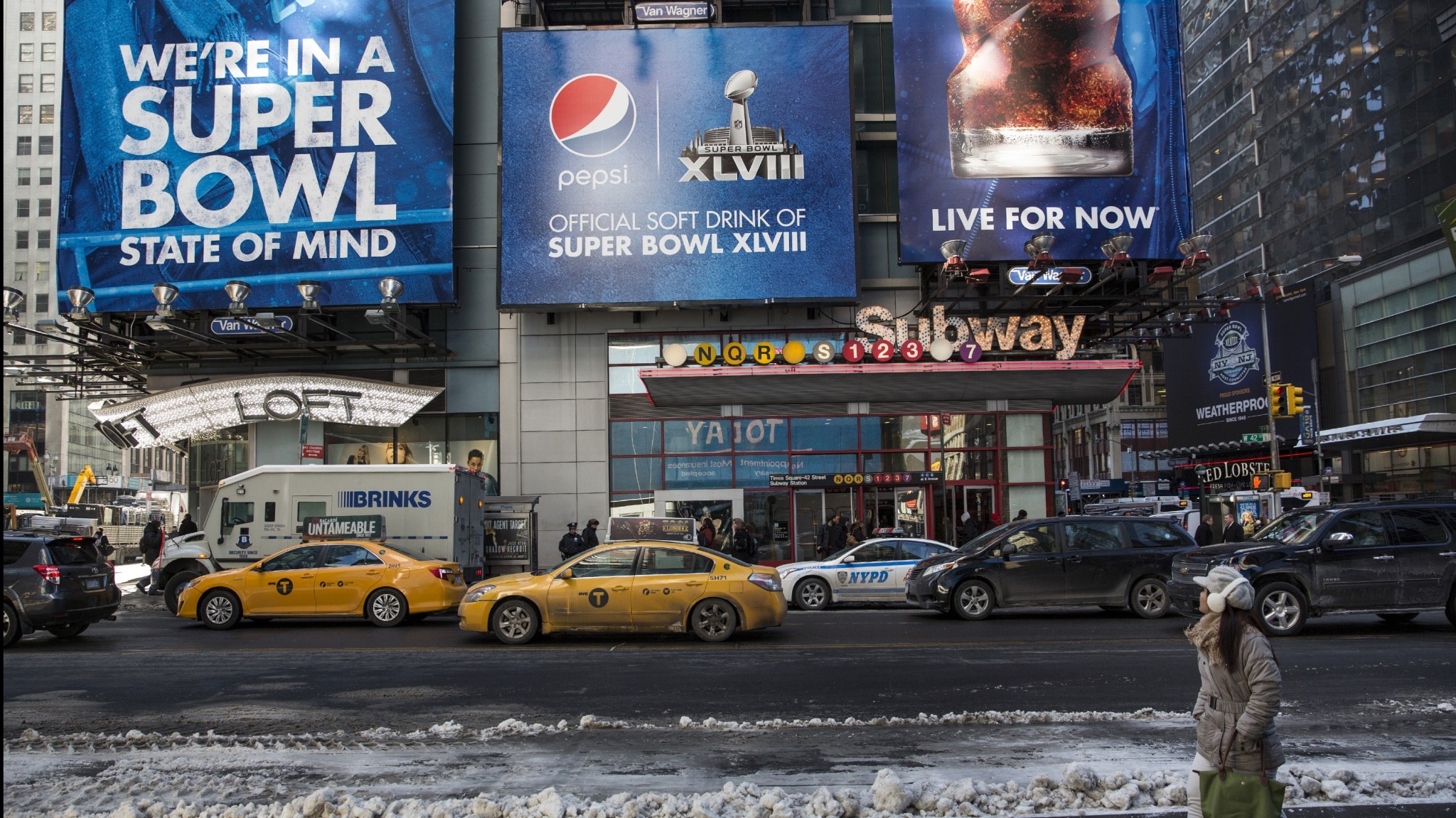 Have you heard? The Super Bowl is in New York this year. And New Jersey, technically. Grantland will be on the scene the entire time. Today, let’s kick things off by discussing the host city.

I got to New York City on a red-eye from Los Angeles a few days ago, and the first coherent thought I had as I stepped outside baggage claim was, F—, it’s cold. That was my next thought, too. And the one after that, and after that, and … that was pretty much my only thought for the 10 minutes between exiting the airport doors and hopping into a cab. I’ve never been more aware of how weak Southern California has made me than while in the taxi line at JFK.

But then, walking around New York for the next day or two, everyone in the city seemed to be on the same page. The “F—, it’s cold” page. So maybe it’s not a Southern California thing. Maybe it’s all just part of the experience at the Cold Weather Super Bowl.™

Anyway, we did it. We’re here. The idea that started as a funny thought experiment a few years ago is now actually happening. New York City.

There have been no real “events” yet, but I’ve been around for a few days seeing friends, so let’s start the week with some quick thoughts about where we are.

Is New York City a good place to host a Super Bowl?

There are pros and cons here.

PRO: Why not? There will be millions of people arguing about whether New York was the right place to host this game, or whether the Super Bowl should be played in the cold, but the bottom line is this: It’s just one year. It’s OK to take some chances and mix things up, even with the NFL, with the most important game on the face of the earth. Jacksonville and Detroit have hosted the Super Bowl in the last 10 years. Anything that can be hosted in Jacksonville and Detroit can be hosted anywhere.

PRO: No matter what you say about the weather, New York City is a place people want to visit. Unlike, say, Indianapolis, or Phoenix, or Houston or, for God’s sake, Jacksonville.

CON: The game is not in New York City — it’s in New Jersey, which means at some point everyone’s gonna have to pile onto trains to East Rutherford for the game on Sunday, and Newark for media day tomorrow. Both are a significant step down from Manhattan. If New York City is Jay Z, Newark is Memphis Bleek.

CON: Any huge sporting event works best when everything is centrally located, the stadium is close to everyone’s hotels, interviews all happen close by, everybody goes out in the same cluster of bars downtown, etc. None of that is true this year.

PRO: There’s no city in America more equipped to handle the influx of people, parties, and desperate calls for a taxi at 2 a.m.

CON: Those cabs will get so expensive if you’re here all week, because traffic is horrible and everything is 25 minutes away from anything else.

PRO: They shut down 10 blocks of Broadway to build something called Super Bowl Boulevard. That includes a 60-foot-high, 180-foot-long toboggan run. That toboggan might single-handedly make up for everything else about this week that makes no sense.

PRO: If it gets cold and miserable, that’s OK. Any kind of bad weather brings people together. It gives everyone something to complain about.

PRO: Super Bowl week is like All-Star weekend for rich white people. And rich white people LOVE New York. Proof: “Expect to see somewhere in the very pricey neighborhood of 1,200 private planes arriving in the days before kickoff.” (Note: Escalades are to All-Star weekend as private planes are to Super Bowl week. Jerry Jones never travels with fewer than 20.)

PRO: The Super Bowl is already overwhelming and obnoxious in 10 different ways, so pairing it with Times Square feels right. As someone at the NFL said, “How can we take the most over-the-top event of the year and make it just a little more ridiculous? SEND THE FOX ROBOT TO MIDTOWN.” 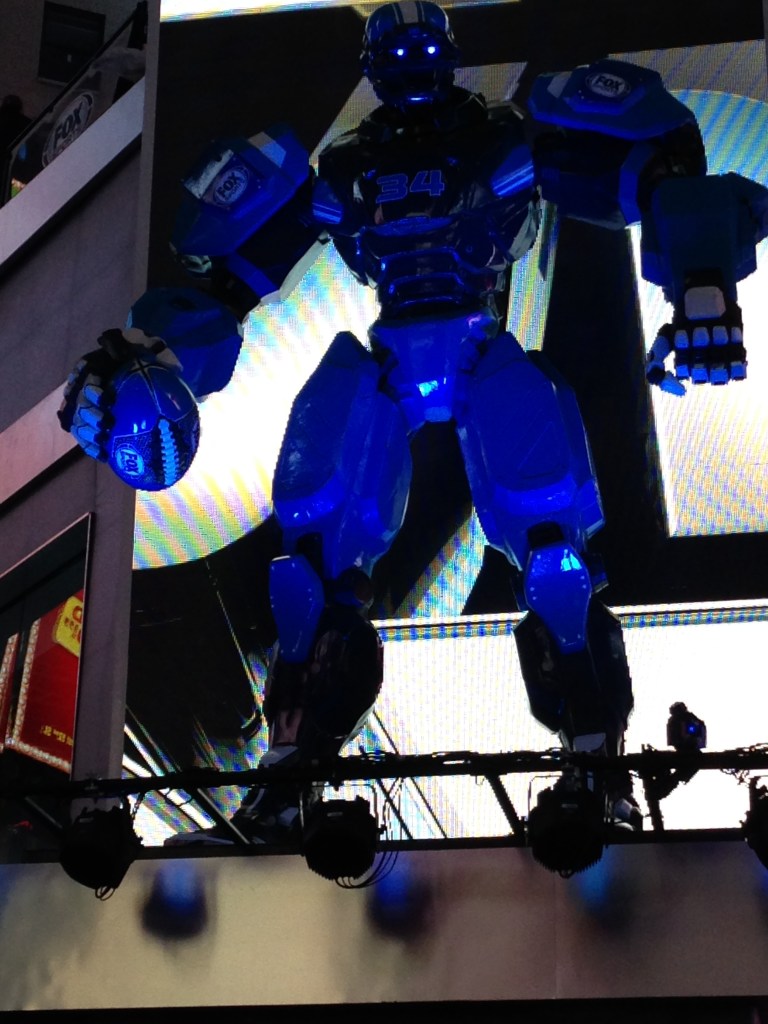 I won’t even be mad when the Fox Robot goes sentient and starts destroying America. It’s only a matter of time.

PRO: Hey, the media capital of the world!

PRO: Kendrick Lamar is performing at a Super Bowl party this weekend, so there’s still an outside chance of him rushing the stage on Sunday and rapping his “Control” verse a cappella, crushing New York’s heart on the biggest stage possible.

PRO: Both teams are staying in Jersey, so there’s a much smaller chance of someone getting in trouble and swinging the outcome Sunday.

CON: The weather forecast for Sunday is already the most anticipated news of the week. You’re going to be so sick of this by Tuesday afternoon.

PRO: Talking about the weather is better than another seven days talking about whether Richard Sherman is setting a good example for your kids. Maybe we’re coming out ahead. 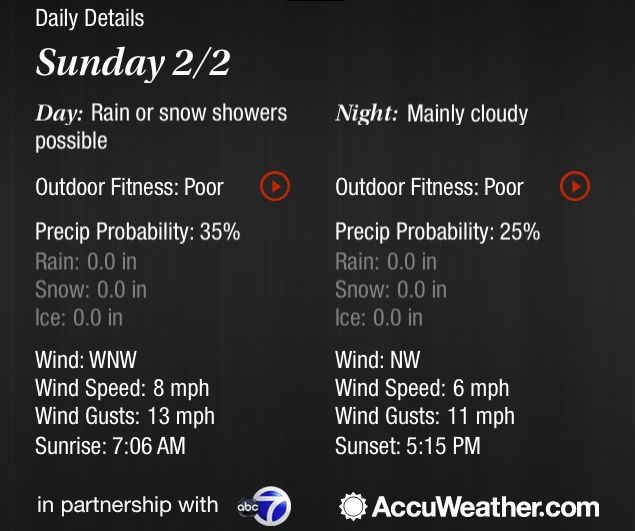 “It’s football,” a guy from Denver told me this weekend when I brought up everyone’s favorite talking point. “You’re supposed to play it anywhere.” This seems to be a popular take around sports right now. On the other side of the spectrum, a businesswoman from Seattle said, “Maybe it’ll be such a nightmare they never try to do this again.”

When you think about it like that, there are no bad outcomes here. If it works this week and the game goes off without too much trouble, this means we can think about Super Bowls in Chicago, Denver, D.C., wherever.

Worst-case scenario, everything turns into a nightmare and Dan Snyder never gets to host a Super Bowl. Everybody wins!

For now, just remember this about the NFL: No league in the world is more obsessed with controlling everything about its image and its product, and weeding out any variables that could cost it money. If Roger Goodell could have every Super Bowl in Glendale, Arizona, in a retractable-roof stadium surrounded by pop-up condo developments and Chili’s restaurants, with the game populated exclusively by fans who traveled there to worship pro football, that would probably be perfect.

But New York? So many things can go wrong, and half the people here actively resent the NFL’s presence in town this week. It’s great. There could be snowstorms, mass rebellions, sleet at the Super Bowl, traffic disasters, private jet wars between owners, anything. For a league that takes itself too seriously and hates uncertainty and plans for everything, we really have no idea how this week will play out. That alone is enough to make me love a New York Super Bowl.

We’ll see, though. It’s only Monday. We haven’t gone to Newark yet.

Here is a Volvo Commercial, starring Zlatan Ibrahimovic, hunting in a snow-covered forest, set to music by Max Martin.

The more intriguing note from Preston is that the move was driven by owner Steve Bisciotti and General Manager Ozzie Newsome, and that head coach John Harbaugh was a “non-factor” in the move.