It’s that time of year again: Time to look back at the season that was and take stock of the players who were exceptional. Who captured our imagination? Who pushed the boundaries of what was possible? Who was Dion Waiters? The NBA has plenty of awards for the best players, but now it’s time to recognize those who help make basketball the best sport.

The Triangle All-Stars are back. The People’s Dream Team.

The coaches are Gregg Popovich and Rasheed Wallace, just like last year. That pair will never be topped. Now, let’s take a quick look down this year’s roster.

Long before that commercial, long before he saved the Cavs’ season, the legend of Mozgov began early in his career. Remember the Mozblog? This was after his first game in the NBA:

… emotionally I burned out. I understand it now when I cooled down. Actually, it was more not like burned out but too geared up. You know when I’m like that I can get into foul trouble. So it happened again. I went out on the court, got two fouls, returned to the bench. It felt like I had cooled down, but then I came out again and got another two fouls. Of course I’m angry with myself. But the coach is cheering me up. He told me not to be frustrated, that it was just the first game, that I should just continue working without worry. Said that it’s not a catastrophe that I got burned out this time, staying focused in the future is what’s important. Though he didn’t guarantee me a starting job for the Boston game)) But to tell the truth, I didn’t ask about it.

In general, I am struck by the reaction to game results. I heard about it a lot, that in the NBA the price of each game is not as big as in Europe, but when I faced it in person… It felt somewhat unusual… People lost a game, went through the mistakes and forgot about it. This feels a bit strange.”

Or his Vegas wedding during All-Star Weekend:

Literally abandoning everything, we jumped into the limo dressed right as we were. Me – in a tracksuit, which I was wearing to look around the city. Alla – not in a white dress either))) I guess Alla didn’t dream of her wedding since childhood to be like this)) But, trust me, to plan everything, to make it more thought-over here, in the NBA, with those off-schedule of unplanned events would be just impossible.

That history makes it even sweeter that Mozgov has found a crucial role on a team that matters. The media highlight of the year was Brian Windhorst telling Bill Simmons, on the B.S. Report, about how LeBron was despondent and defeated midway through the year, and one night he was slumped against a hotel wall, pondering how impossible his task was with this Cavs team. Then he saw Mozgov walk in, and everything changed. Instantly, as if struck by a lightning bolt of hope, the best player on earth was rejuvenated.

Since Mozgov’s arrival to protect the paint, the Cavs are 33-7 when playing at full strength, which is a 67-win pace. Knowing that Mozgov is one of the big factors behind their success just makes this story even better. When Mozgov wins at life, we are all parentheses faces. 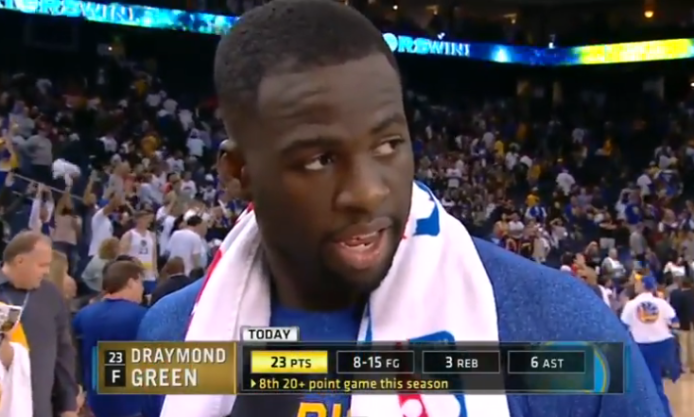 This is the king.

That is the blueprint for a successful life.

As the MVP race winds down, millions of people have been crediting Steph Curry with taking the Warriors from good to great. That seems like a stretch. Curry may well be the best player in basketball this year, but Steve Kerr was at least as crucial to the Warriors’ transformation. If you want to see the impact Kerr has had on this team, look no further than him making Green a starter. It was a gamble that made a great defense even better and an amazing offense unstoppable. The Warriors had one of the most dominant regular seasons we’ve ever seen. It will also likely end in a max contract for Green this summer.

So yeah, a Spartan will lead this team. He’s family. And, like Mozgov in Cleveland, his presence alone makes it impossible to root against what’s happening with the Warriors this year.

Draymond Green on Andrew Bogut's 9 blocks. "I'm not gonna step back & pop champagne bottles like that's not what he do. That's what he do."

“What can I say [about Michael Carter-Williams], he’s here two and a half months ago yesterday, he’s one of my best friends. If I stopped today playing in NBA, I know I’d have a good friend. But his locker’s always dirty, I have to tell him to clean up …”

“Yesterday my teammates were making fun of me,” he says of the mean man face. “They said it was ugly. It was prettier [tonight]. I had swag, too.”

It should not have been possible to enjoy the second year of Giannis more than the first, but here we are. He’s getting meaner, he’s best friends with MCW, and he’s showing us more on the court every month. The video above comes courtesy of Brew Hoop, and you should watch the entire thing, if for no other reason than every word in the English language sounds better when Giannis says it. Or watch him dunk all over the Pelicans. Or watch the Bucks in the playoffs. Whatever. What’s important is that we are two years in and watching Giannis is only getting better. 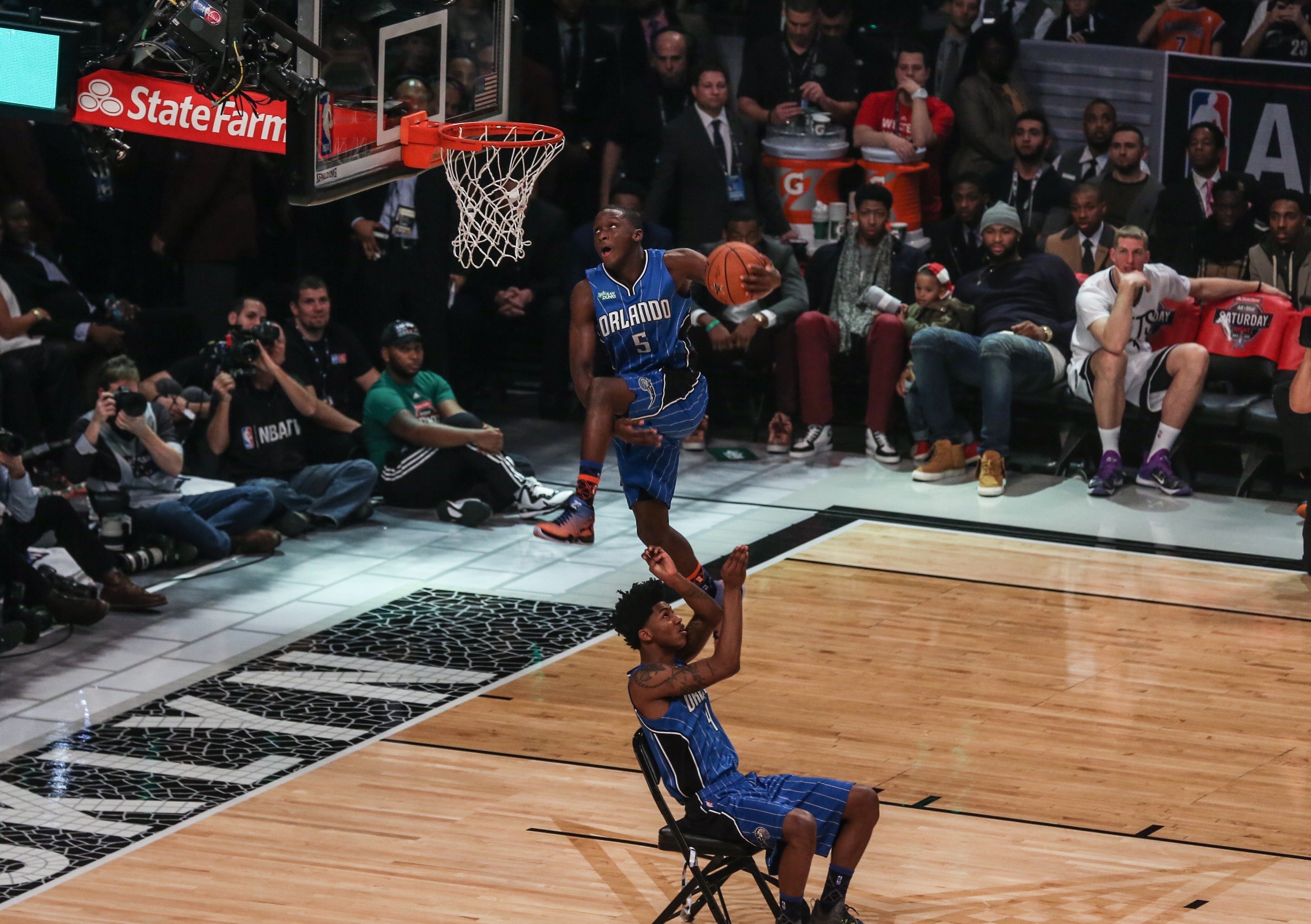 And if we need a little more scoring … 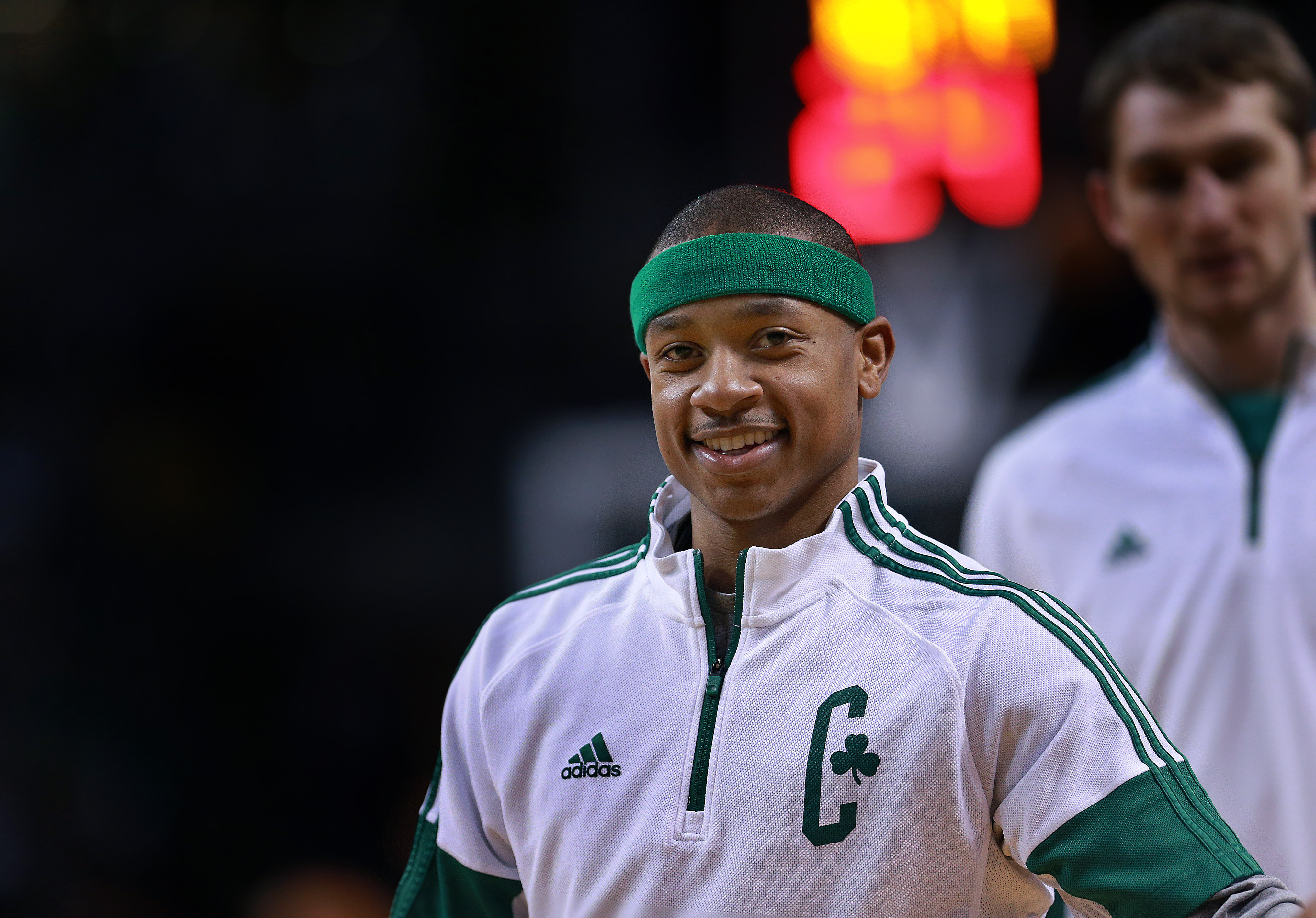 Boston’s LeBron is 5-foot-9, accused of being locker room poison on two teams within the past 12 months, and is absolutely delightful. Forget Sacramento, forget the disaster in Phoenix. Every time he enters a Celtics game, watching Boston becomes twice as enjoyable. He’s also found the perfect squad, because while his ball-dominant scoring tends to detract from the offense of teammates, the Celtics don’t really have anyone else who can score. It’s Isaiah Thomas against the world.

The world will definitely, absolutely win in the end, but watching him fight the battle is entertaining enough to win us over regardless. 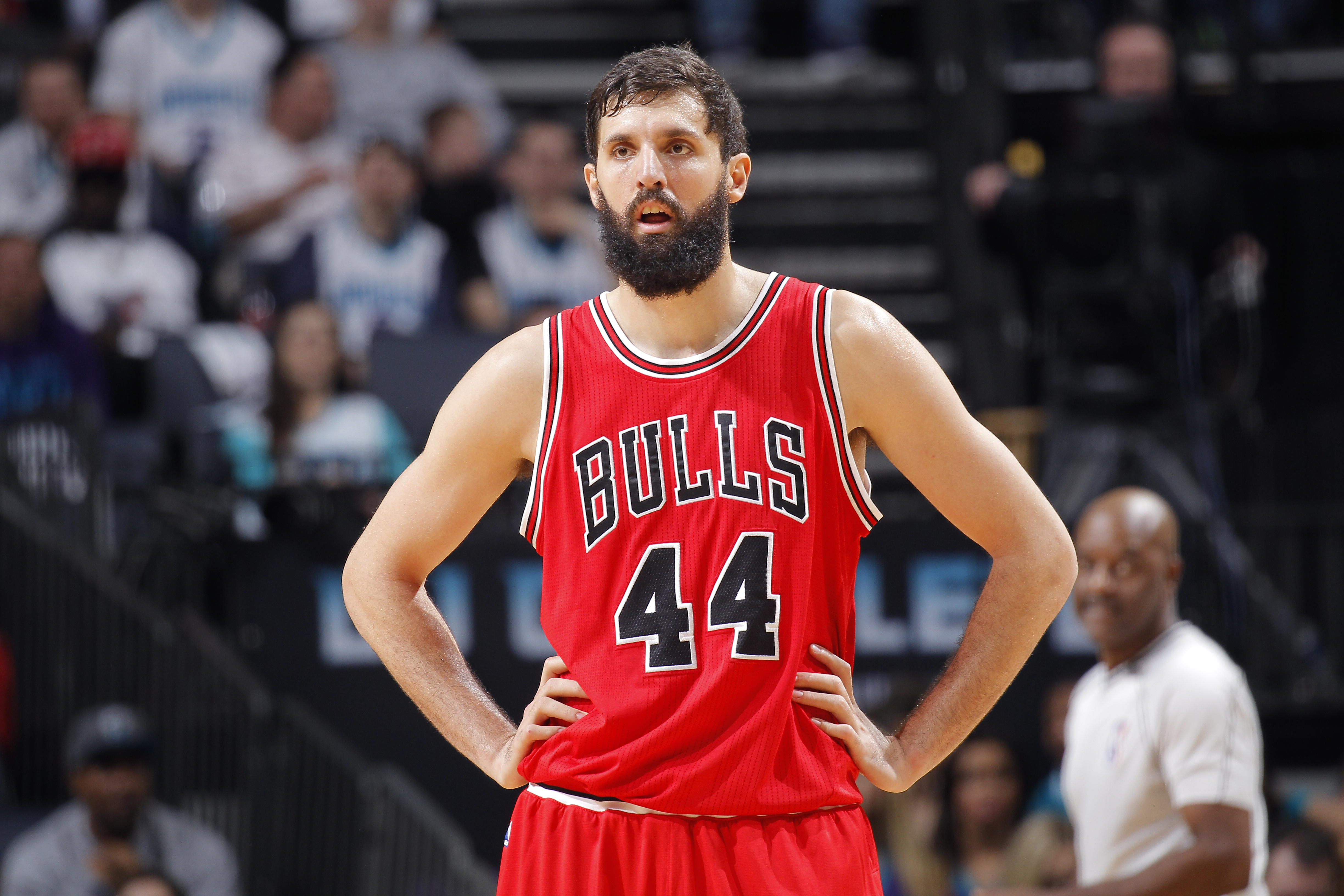 This Bulls season could have been so depressing. Derrick Rose got hurt again, Thibs hates the ownership, and the ownership hates him right back. Pau Gasol initially looked great, but then everyone realized he didn’t have court chemistry with Joakim Noah and he was taking minutes from Taj Gibson. Jimmy Butler was the breakout player of the league, but then he came back to earth, and then he got hurt. It should have been misery the past few months. Like watching the wheels come off on a dynasty that never actually won anything.

But no. Mirotic changed all of that. He is a maniac. Whether he’s slashing through the lane to dunk on people or draining 3s that revamped the Chicago offense, he’s the new ingredient in the Thibs-Bulls recipe. The rest of the Bulls have been up and down, sure, but the radioactive energy of Mirotic keeps things from ever getting too dark. With or without Thibs, with or without Rose, Bulls fans know they have Mirotic, and that’s enough to make the future bright.

He’s also in an ongoing beard war with Andrew Luck, and it’s impossible to say who will prevail, but hopefully it lasts the next 10 years.

You don’t need to be sold on Boogie again. I’m just here to remind you that this Instagram happened, and that this was the greatest GIF of the entire NBA season.

That little girl is an assistant coach on this team.

Is Belinelli here solely off the strength of this creepy European magazine cover? YOU’RE DAMN RIGHT HE IS. 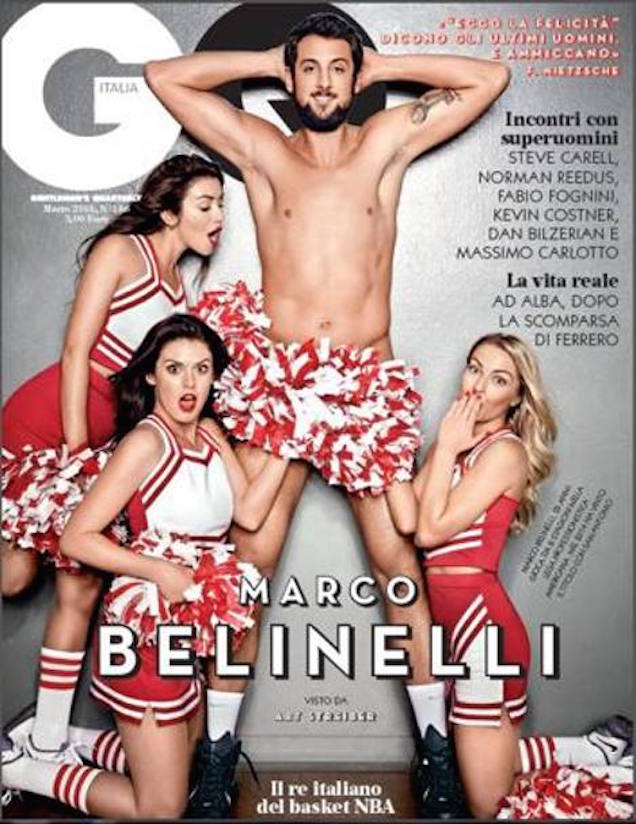 Plus, this team needed some outside shooting. It’s up to Belinelli and …

Think about this for a minute. Really stop and think. How wonderful is it that J.R. Smith is a crucial role player for a title contender?

Anywhere else, and his career is disappointing, annoying, or depressing. But on a great team? He’s the perfect comic relief and the perfect compliment to players like LeBron and Kyrie Irving.

Here Smith is hitting a 3 while falling out of bounds to beat the buzzer on national television. Or look over here, where he’s alley-ooping his way through the Knicks team that left him for dead by the side of the road. Or he’s the battle-tested veteran lecturing young players about the rules of club engagement at 4 a.m. Or he’s clique-ing up with the best player on earth. Life is good. Life is much better with J.R. Smith on the Cavs.

I have a serious question for y'all and I need an answer. If a turtle loses its shell is it naked or homeless?

The early bird might get the worm, but the second mouse gets the cheese lol

Kendrick Perkins on Rudy Gay's clown comment: "I'd rather be a clown than a virus."

Energy off the bench.

Nobody in the history of sports has ever lived up to the hype better than Dion Waiters in 2015. This is its own kind of achievement.

You want to talk about numbers? Advanced stats? The other night Waiters had 13 points on 4-of-21 shooting.

That line is more incredible than anything Anthony Davis has done all year. 4-of-21! What a fucking hero. I mean it. You can’t miss the shots you don’t take. Until he finally completes his destiny and gets sent to China to wage war with Stephon Marbury, Waiters will always have a place on this roster.

The patron saint of the Triangle All-Stars.