Trade Machine Madness: A Three-Team Al Jefferson Deal That Makes the Jazz a Force in the West 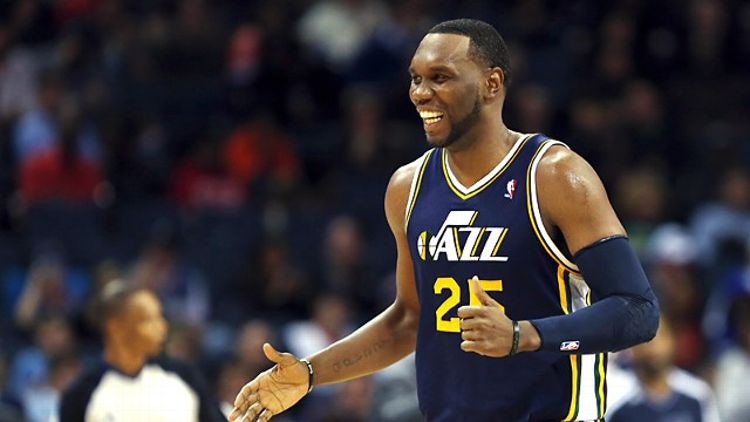 Much like their Northwest Division rival Denver Nuggets, the Utah Jazz are a collection of talented youngsters and productive veterans void of a superstar. Without a clear central figure, the pressure has been on head coach Ty Corbin to identify the best rotation of players that are, almost to a man, multi-talented but somewhat limited in some facet of the game.

The lineup data shows that the Jazz boast some downright awful five-man units, but they also have a few very productive ones. Injuries have forced the team into some tough spots this year, but among its roster, Utah may have the right combinations to seriously compete with the West’s elite rather than settling for a one-and-done stay in the playoffs. The main problem with that option is that it’s boring as hell.

Utah has multiple picks in next year’s first round, and and a few of those productive veterans — most notably Al Jefferson and Paul Millsap — are on expiring contracts. This makes the Jazz an ideal candidate for a big deadline move. By dealing one of their surplus big men to upgrade a backcourt in dire need of help (and making a few other small tweaks), the Jazz could become Denver 2.0 — a team that no one takes seriously as a Finals contender but that everyone wants to avoid in the postseason. To figure out how they might get there, I visited the trade machine and descended further into madness to whip up yet another ridiculous multi-team deal:

It’s easy to get caught up in the many positives about Jefferson. He’s a great post scorer and, in many ways, has become the face of the Jazz franchise since his arrival in 2010. The harsh reality is that despite those agreeable traits, Jefferson is a one-way player who shoulders some of the blame for Utah ranking near the bottom of the league in defensive efficiency. Coupled with his expiring contract, it’s a no-brainer for the Jazz to give him up — along with one of their two first-round picks — in order to obtain a young, affordable, and productive two-way guard like Dragic. Even the injured Frye can help in the long term as a stretch big who, while slightly overpaid, can be a solid addition to a contending team.

By swapping out Jefferson for understudy Enes Kanter, Utah gets a massive upgrade defensively. Though Kanter has played primarily against opponents’ second units, he boasts the team’s best defensive rating at 100.2 — a seven-point improvement from Jefferson. By combining Kanter with DeMarre Carroll and Dragic — two very good perimeter defenders — in the starting lineup, the Jazz could drastically improve their porous defense overnight. Utah’s offensive efficiency may take a hit in the process, but given that Dragic is a fine offensive player and Kanter is an emerging force on the block, the net result would still be a positive. And that’s before even getting to the effect on the bench.

With Dragic in the starting lineup, Mo Williams (when healed from his thumb injury) would join forces with Gordon Hayward, Marvin Williams, and Derrick Favors to form what could easily become the best bench unit in the league. By shifting Favors to the 5 and making the taller Williams a stretch 4, Utah could run the same spread pick-and-roll scheme the Pistons do with their second unit. That four-man combination — with Favors playing the part of a young Amar’e Stoudamire in Phoenix — could give the Jazz a major scoring boost on a nightly basis.

Dragic’s size and the positional flexibility of Favors, Hayward, and Carroll, would allow the Jazz to field a variety of effective crunch-time lineups that allowed them to either create mismatches or avoid them.

Getting a productive center for the price of a mid- to late-first-round pick and two players who fit neither the short- nor the long-term plans seems like a solid play for a team that’s very close to real contention. Perhaps the biggest draw of acquiring Gortat is that it simply gives Atlanta options, both on and off the court, without drastically altering their cap situation.

What it would do

Though the team seems to have the personnel to play small and fast, head coach Larry Drew — by either his doing or urging from Josh Smith — has consistently deployed bigger lineups with Smith at the 3. The addition of Gortat allows Atlanta to play a 5-man who’s not nearly as limited as the incumbent Zaza Pachulia and gives the Hawks a rather large frontcourt with some serious defensive potential. A bigger lineup would allow the Hawks to match up better against teams like Indiana and Chicago in the playoffs, but it does makes things a bit dicier should they come up against New York or Miami.

By securing Gortat, Atlanta would ensure itself a productive frontcourt, even if Smith does choose to leave. It also allows them to seek the best package if they do try to trade Smith, rather than modifying deals to make sure they receive a competent big man in return.

What it would do

Losing Dragic is a blow, but as productive and affordable as he is, the guard is certainly not a franchise player. Dealing Dragic — especially with young prospect Kendall Marshall sitting behind him — along with the disgruntled Gortat for expiring contracts and two first-round picks would allow the franchise to completely bottom out, a much better option than treading the waters of mediocrity.

Acquiring picks from both Utah and Houston (via Atlanta) could potentially give the Suns five first-round selections in the 2013 draft and two of those — their own and the Lakers’ — could be in the lottery. If L.A. does fall short of the postseason, the Suns would likely have three lottery picks in the next two years and oodles of cap space. The team could then choose to go the Oklahoma City route by staying patient and hitting on their picks or by using those picks to attract a star player looking for a new home. (Kevin Love perhaps?)