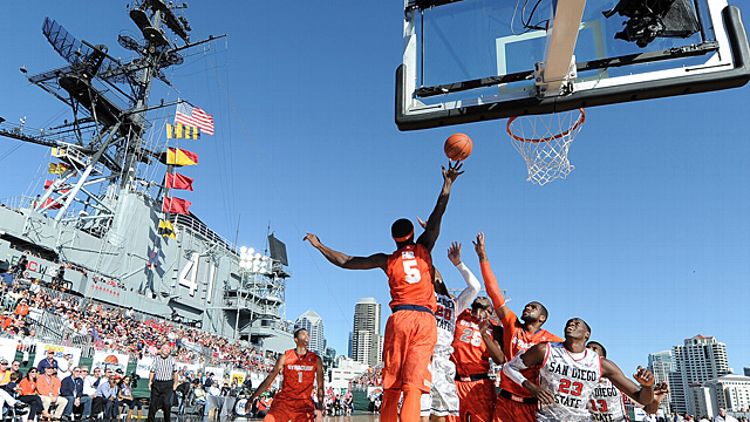 Local radio stations are playing Christmas music, the Chiefs are mathematically eliminated from the playoffs, and Dick Vitale went into an on-air rant that ended with him talking about Barbra Streisand’s high school classmates. This can only mean one thing: College basketball is officially back!

In case you missed the opening weekend of the greatest sport in the world, and even if you didn’t, here were the three takeaways that stood out to me.

Not All John Calipari Teams Are Created Equal

A popular notion among NCAA hoops circles has been that once John Calipari figured out how to win a national championship by loading up on one-and-done players and counting on raw talent to trump experience, there would be no telling how many national titles he would win. Kentucky’s last three seasons have only strengthened this idea, as each year the Wildcats advanced further into the NCAA tournament, culminating in Calipari’s first national title last season. So now it’s easy to think that Calipari has mastered the formula and that as long as he brings in great recruiting classes, the Wildcats will be a shoo-in for the Final Four every year. Right?

In the words of Lee Corso: “I think I wet myself.” Wait, that’s not right. What I meant was, “Not so fast, my friend.”

While watching Kentucky’s 72-69 win against Maryland Friday night, it was evident that this Wildcats team will never be nearly as good as last year’s Kentucky squad. The obvious rebuttal to this is that Friday’s game was this group’s first game together. Over the course of the year, we can expect them to learn to play together and everything in Lexington will once again be roses. My counter to this is Jarrod Polson. Under no circumstances (including the starting point guard battling the flu) would last year’s team ever have needed a former walk-on to save their asses like Polson did on Friday night, when he was Kentucky’s third-leading scorer while leading the team in assists. This isn’t a dig at Polson, but rather a statement on how much further along Kentucky was at this point last year. (Reminder: Last year’s Wildcats beat Kansas — who were considerably better than this year’s Maryland team — rather convincingly in their second game of the year.)

This, of course, isn’t to say that Kentucky sucks and has no chance at defending its national championship. No, all I’m saying is that maybe Calipari hasn’t figured out the secret recipe to get one-and-dones to win national titles. Maybe the group he had last year was just a once-in-a-lifetime blend of talent and chemistry (they were the most talented team in college basketball history, and if you think otherwise you’re dumb and you’re wrong). I still expect Kentucky to be in the national title hunt, but it’s important to note that with new players comes a whole new set of challenges. Last year’s team blended perfectly and had almost no flaws. Don’t expect the same from this year’s bunch of superstar freshmen. Ego and pride are tricky things, after all — not to mention the fact that even if the players’ personalities mesh well, there’s still the issue of whether their skill sets complement each other.

The good news for Kentucky fans, though, is that …

There Is Far Less Talent in College Basketball This Season

As of today, the consensus no. 1 and no. 2 teams in the nation (Indiana and Louisville) have, combined, one player who is a surefire NBA player — Indiana’s Cody Zeller. (Cue Indiana and Louisville fans complaining that I’m underestimating the talent on their teams.) Last season, the preseason no. 1 and no. 2 teams (North Carolina and Kentucky) had a combined pretty-much-everyone-on-their-rosters who were surefire NBA players. Also, I get the sense that the fans of most other top-10 teams think their team is ranked too high because they just don’t believe they’re that good. Throw in the fact that arguably the best amateur player in the world, Shabazz Muhammad, is suspended indefinitely and might not play a single game for UCLA this year. There’s just no denying that compared to last year’s players, the talent in 2012-13 is disappointing.

But there is good news. This year’s talent isn’t necessarily bad. Instead, last year’s crop was just abnormally good. Case in point: The first non-college player to be taken in the NBA draft last year was Evan Fournier from France, with the 20th pick. The last time the first 19 picks all came from college was 1994. For whatever reason, several top freshmen from two years ago decided to turn down NBA riches and stick around for another college season, and a loaded freshman class with players like Anthony Davis and Dion Waiters joined them to create the richest college basketball talent pool we’ve seen in a long time. Very few from that loaded freshman class stuck around for their sophomore years, however, meaning that we won’t see a repeat of last season. For fans of parity, wide-open national championship races, unpredictability, and tons of March Madness upsets, this is a fantastic thing. For guys like me who labor to determine who the best teams in the country are, this kinda sucks.

Like sex in the shower and Mike Brown’s Princeton offense, playing college basketball games on an aircraft carrier is an idea that sounds great but in reality is disastrous. Last year, the idea worked out fine when North Carolina beat Michigan State in San Diego and everyone involved said it was a pretty cool experience. So naturally, the world of college basketball took that idea and ran with it by scheduling three games to be played on aircraft carriers this year. And like the North Carolina–Michigan State game from a year ago, all three came off without a hitch and were splendid experiences for all involved. Well, you know, other than the fact that all three games were delayed or canceled and the one game that was played in its entirety — Syracuse’s 13-point win over San Diego State — had a handful of issues, most notably gusts of wind that affected shooting (the teams combined to go 2-22 from behind the 3-point line) and a bubble that formed on the court shortly before the game.

So yeah, it’s likely that we’ve seen our last aircraft carrier game for quite some time, which is completely fine by me. I’m all for supporting the troops, especially around Veterans Day, but I’m also all for not canceling college basketball season-openers that I’ve been looking forward to for six months. This is why I hope future military appreciation games will follow in the footsteps of the Michigan State–UConn game from Friday, which was played on a military base in Germany. (It was the game of the weekend, by the way — shout-out to Kevin Ollie, Shabazz Napier, and all the Huskie fans who didn’t jump off the bandwagon when shit hit the fan and things went south last year.)

The one positive takeaway from the aircraft carrier fiasco is that I imagine the conversation between the weather experts who were consulted for the event and the guy who was in charge of putting on the game went like this:

On Wednesday (two days before the games were to be played), the weatherman makes a huge discovery and goes right to the director of the event to notify him.

“Sir, I think you might want to take a look at this,” he says. “According to my forecast, there might be a problem with humidity and dropping temperatures on Friday night. This would mean that — ”

“Dammit, Johnson, not now!” the event director snaps back. “Can’t you see I’m trying to run an event here?”

“I said not now, dammit! I don’t have time for your science report. There are tens of dozens of people counting on this event running smoothly. Did you see the game on the aircraft carrier last year? The president was there. The president.”

Fast-forward to Friday night. The game has been delayed because of condensation on the court. The event director is in his office with his face in his palms and a half-empty bottle of whiskey on his desk. The weatherman walks in again.

“Sir, if I may, this is what I was trying to tell you the other day. The humidity in the South is much higher than in San Diego. Because of this, when the sun goes down and the temperature drops, condensation forms.”

“I tried but you told me you weren’t interested.”

“That’s not important now. What’s important is finding a way to play this game. So shoot me straight. How’s it looking? What’s your fancy thermometer saying about the humidity?”

“It’s not looking good, sir. The hygrometer says it’s still really humid and will remain so indefinitely. This is the South, after all.”

The event director looks defeated. He doesn’t want to ask, but he must. “How humid are we talking, Johnson?”

NFL Run & Shootaround: Rising Up and Rising Down