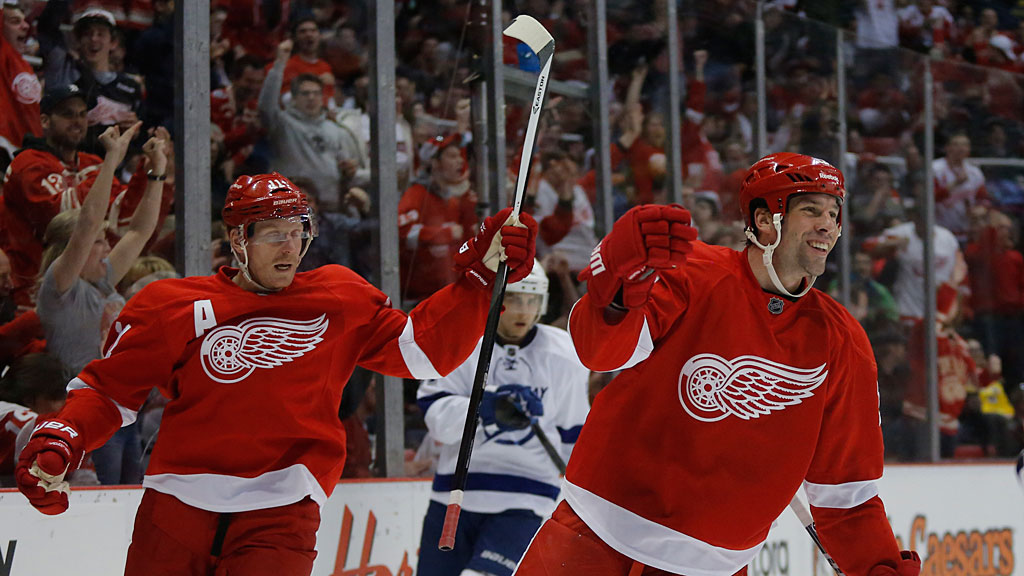 The Team We’re All Vaguely Sick Of

So I guess we can just go ahead and pencil the Red Wings in for 23.

That would be 23 consecutive seasons of making the playoffs, of course, the longest active streak in pro sports and one that seemed in mortal danger just a few weeks ago. On March 17, the Wings found themselves three points out and needing to climb past two teams to get into the postseason. What was worse, they were missing their two best players, Pavel Datsyuk and Henrik Zetterberg, to long-term injuries.

Two weeks later, they’re holding on to one of the East’s wild-card spots. They haven’t exactly done it by catching fire — they’re just 5-3-0 over their last eight — but it’s been enough to pull back into what’s become a turtle derby for the conference’s final two spots.

On Saturday, the Wings went into Toronto to face what should have been a desperate Maple Leafs team and walked out with a 4-2 win. After falling behind 1-0 after one period, Detroit blitzed the Leafs for three goals in the first eight minutes of the second. Toronto pulled back to within one late in the period, but Darren Helm’s hat trick goal midway through the third put a stop to the comeback. The Leafs have now lost eight straight in regulation for the first time since the worst of the Harold Ballard years. They’re a mess, and after this paragraph ends we’re not going to talk about them anymore, because this post is about actual playoff contenders.

The win snapped Detroit’s three-game losing streak and moved it into a tie with Columbus for the two wild-card spots. The Red Wings pulled ahead of the Blue Jackets on Sunday on the strength of a 3-2 win in Tampa, and now sit at 84 points with seven games left to play.

In Datsyuk and Zetterberg’s absence, the biggest story has been Swedish phenom Gustav Nyquist, a 24-year-old winger who had only 40 games under his belt heading into the season and wasn’t even called up to the NHL roster until late November. He’s scored at nearly a point-per-game pace since then, including 11 goals over his last nine games. That included Sunday night’s effort, a goal-of-the-year candidate that saw him shrug off multiple attempted tackles to beat Ben Bishop on a second effort. Even given the inevitable regression from his current 19.6 percent shooting, he seems set to become the latest Red Wing to go from late-round draft pick to first-line fixture.

The Wings probably still need another eight or nine points in their final seven games to wrap up their spot. So sure, we can pencil them in, but let’s also make sure to have an eraser handy. A lot has changed over the last two weeks, and a whole lot more can change over the next two. And that’s especially true if either of the two teams still chasing them can wake up and make a strong push.

One of those teams, the Columbus Blue Jackets, kept pace with Detroit on Saturday thanks to a 3-2 win in Carolina. They needed a comeback to do it after an Andrei Loktionov goal put the Hurricanes ahead in the third period. But Artem Anisimov tied it, and Ryan Johansen’s power-play goal ended the game in overtime. It was a crucial win for Columbus, which had already lost to the Islanders the previous weekend and couldn’t afford another loss against a team well behind it in the standings.

The Blue Jackets are an easy team to root for, if only because their fans deserve something to cheer about. Their history of playoff futility is well-known by now; they joined the league in 2000, and have yet to win a single playoff game. (Their only appearance was in 2009, and they were swept by the Red Wings.) They finished dead last in 2011-12, then rebounded with a surprisingly strong season last year that ended with them missing out on the final playoff spot on a tiebreaker.

That gave Columbus some reason for optimism coming into this season, especially given the team’s move to the easier Eastern Conference. A disappointing 10-14-3 start left them chasing the pack, and they were still struggling to get back to .500 as 2014 arrived. But since then they’ve gone 21-11-2 to climb back into the race, and they’ll enter the final stretch two points back of the Red Wings and one up on the Capitals for the final wild-card spot, but holding a game in hand.

The Blue Jackets can’t exactly claim to have been hot lately; when they host the Avalanche on Tuesday, they’ll be trying to win back-to-back games for the first time since March 11. But it’s been enough to keep pace with the rest of the Eastern bubble. The rest of the schedule isn’t easy, and includes games against the Flyers and Blackhawks later this week, but if they’re still alive after that, then they’ll have a chance to finish strong with a final five that includes games against the Islanders and Panthers.

There is one odd quirk in the Blue Jackets’ schedule to keep in mind: It includes a game against the Dallas Stars on April 9 that Columbus is already leading. That would be the makeup of the game that was postponed on March 10 when Rich Peverley collapsed six minutes in. The Blue Jackets were up 1-0 at the time of that incident, and so the makeup game will begin with the same score even though the teams will play a full 60 minutes.

It’s also worth remembering that the Blue Jackets have banked 33 ROW (non-shootout wins), which will be enough to give them the tiebreaker over their wild-card rivals. That might not be enough for them to squeeze in, but unless you’re a fan of the Wings or Caps, it’s hard not to hope they can.

And then there’s the Washington Capitals. Somehow, despite six consecutive years of playoff appearances and a talented roster that features the reigning MVP, the Capitals have felt like an afterthought in the East. But with seven games to go, they’re still right in the thick of the race. And they’re still a stubbornly tough team to figure out.

The goaltending hasn’t been good, but they have Jaroslav Halak now so maybe they’ll be OK. They didn’t have enough scoring depth, but then along came Evgeny Kuznetsov and we’re still not sure how good he can be. Alexander Ovechkin is going to hit 50 goals any day now and win the Rocket Richard Trophy by a mile, but he’s also a league-worst minus-34 so I guess he’s terrible. (He’s not, and we explained why a few weeks ago.)

The task didn’t get any easier Sunday night, when the Capitals traveled to Nashville to take on an opponent that hasn’t been part of the playoff conversation in months. Facing the Predators must have come as a relief after a two-week stretch in which the Caps played five straight against the league’s elite, facing the Ducks, Kings (twice), Sharks, and Bruins. They managed six points over that run, a respectable total given the quality of the competition.

So it goes without saying that they lost to the Predators, dropping a 4-3 shootout decision. That still earned the Caps a point, moving them to 81 overall and leaving them one back of the Blue Jackets for the final spot. And while they still have games against the Blues and Blackhawks left to play, the rest of the schedule looks manageable.

So will they make it? I have no idea. And anyone who tells you they have this team figured out is lying.

• The biggest news from the weekend may turn out to be an injury to Blackhawks captain Jonathan Toews. He left Sunday night’s game against the Penguins after taking a hard hit from Brooks Orpik. It looked bad, though early reports were encouraging. Pittsburgh won the game 4-1.

• In other injury news, Colorado’s Matt Duchene will miss four weeks after injuring his knee on Saturday.

• The Avalanche will play the Blackhawks in the first round, though we don’t know who’ll have home ice for the series. The Avs beat the Hawks to the 100-point mark thanks to a 3-2 win over the Sharks on Saturday.

• Colorado forward Ryan O’Reilly’s attempt to go an entire season without taking a single penalty ended Saturday in just about the strangest way possible: He took a two-minute minor for playing with a broken stick. What a goon.

• That San Jose loss to Colorado opened the door for the Ducks to move back into first place in the Pacific, and they took advantage by pummeling the Canucks 5-1. Anaheim now holds a one-point lead and, more important, two games in hand.

• The Kings won their sixth straight Saturday, beating the Jets 4-2 in a game highlighted by this ridiculous Jonathan Quick save.

• Tampa Bay held on to earn a win in Buffalo on Saturday despite Steven Stamkos scoring into his own net in the third period. The Lightning are locked into a first-round matchup with the Canadiens, with home ice still to be determined. The two teams face each other Tuesday.

• Speaking of Montreal, it beat the Panthers, 4-1, and has now won five straight.

• The Bruins became the first team to clinch its division by beating Washington on Saturday, then followed that with a 4-3 shootout win in Philadelphia. They haven’t failed to record at least a point in any game since March 1.

• The Rangers are still sitting comfortably in a playoff spot and beat the hapless Oilers, 5-0, on Sunday night. But they’ve done it without any goals from Martin St. Louis, who’s been held to just three assists since being acquired from the Lightning on March 5.

• Edmonton did earn a win over the weekend, an upset victory over the Ducks on Friday that marked the third time Ben Scrivens has faced 50-plus shots in a game since joining the Oilers. Needless to say, that’s an exceedingly rare feat.

• Finally, the Sabres inducted Dominik Hasek into their Hall of Fame before Saturday’s game, and announced that they’ll retire his number next year. It’s a nice step toward mending fences between Hasek and coach Ted Nolan, whose first stint in Buffalo ended with bad blood between the two. Nolan and Hasek reportedly spoke on Friday for the first time since 1997. This morning, Nolan signed an extension and officially had the “interim” tag dropped from his title.