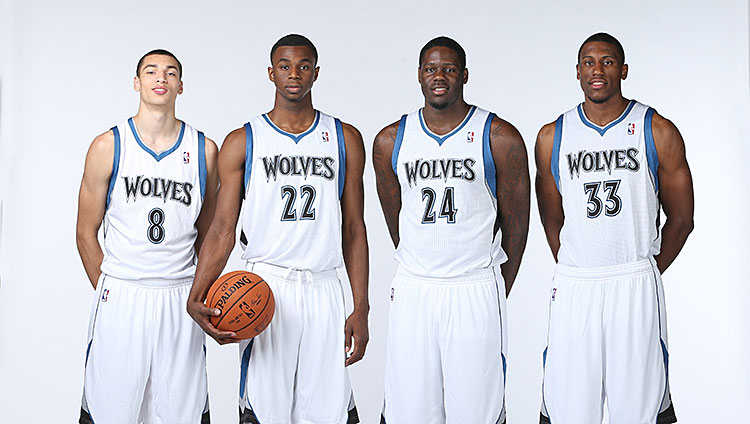 This is how you launch one of the youngest and most athletic teams in Minnesota Timberwolves history: directly into the yawning Technicolor maw of Middle America, festooned in cardboard Oink Booth crowns, coated in cornmeal batter, and deep-fried, a decadent golden brown. The Minnesota State Fair is everything Americana (hot dogs, farm animals, midway rides, prize-winning vegetables) jammed into a coverless blender and put on PULP.

There are useless trinkets being given away, left and right (compression sleeves were the thing this year, with every other fairgoer sporting one); there are garish booths for every political party; there’s a giant barn where you can see a cow give birth. Each day, there’s a new bust of one of the 12 Princess Kay finalists, carved out of butter and put on a lazy Susan in a refrigerator. Once, I saw an F-16 parked in the middle of a street.

And there are farm kids from outstate Minnesota, casually walking their cows and horses down the boulevards. Many of them wear cowboy and work boots, but a surprising number wear basketball shoes — Kobes and KDs and Hyperdunks. So maybe it’s not such a weird place to unveil Andrew Wiggins, Anthony Bennett, and Thaddeus Young (and to re-unveil Zach LaVine) — the Timberwolves have even written you a note excusing you from work.

As far as the day itself goes, they don’t get much better than this one: 70 degrees, less than 50 percent humidity, and a mild sun beating down on the tiny Fox 9 plaza between the deep-fried alligator stand and Demitri’s Fine Greek Foods. The media filters in slowly, and I offer everyone I know a cookie from Sweet Martha’s because when you get a bucket — four dozen cookies for $15 — there is no earthly way you’re eating all of them by yourself.

The emergence of the new-look Wolves from the staging area is bracing. LaVine, who two months ago was the new kid on the block, is suddenly the senior Timberwolf of this quartet. The crowd roars its appreciation and then, with telemarketer headsets in place, the players answer a round of pretty stock questions from journalists with pretty stock answers. The proceedings liven up only when Wiggins, responding to a question about a dunk contest with LaVine, says, “I ain’t doing no windmill from the free throw line.”

There is, after all, precious little to talk about right now, in terms of actual basketball. They hold their jerseys up, uniforms that have been soaked by more camera flash than sweat so far. It makes an odd kind of sense at the fair, where must-do activities each year are along the lines of “look at a bunch of high schoolers’ pen-and-ink drawings of sad, goth elves” and “see the state’s biggest pumpkin.” It’s all this stuff you do and then immediately forget. You walk into the education building, see the booth for your alma mater, think about how you went there, and then walk out, maybe with a bumper sticker, maybe not.

You take a ride on the giant slide.

You throw water balloons at the host of an afternoon talk show.

I saw Thad Young actually hold and kiss a baby, old-time-politician style. As LaVine passed by, I heard him say something about “those cookies,” so I swung my bucket of Sweet Martha’s in his direction. He gave me a “You sure?” eyebrow, I nodded, and he grabbed one, giving me his own appreciative nod in return.

Soon enough, all the talk of making easy transitions, of Wiggins feeling that he already has chemistry with Bennett and LaVine, of Young’s confidence that he can be a veteran leader at 26 — all of it is going to get put on the court, where it will become infinitely more interesting and parse-able. But it also means the end of this moment, this delicious moment of anticipation.

There’s a short story by Tobias Wolff called “Bullet in the Brain,” wherein a jaded, snarky book critic by the name of Anders is shot and killed during a bank robbery. As the bullet enters his head, Wolff runs down a litany of memories that do not flash before Anders’s eyes before finally arriving at one crystalline memory from a childhood baseball game. What Anders remembers is the lilting melodic sound of one kid’s off-kilter grammar: “Short’s the best position they is.” It all happens in a hairsbreadth, but the moment stretches out and elongates. It won’t last forever, but, as Wolff writes, “for now Anders can still make time.”

And so can the newest Timberwolves.

Steve McPherson (@steventurous) is a contributor to Grantland, Rolling Stone, A Wolf Among Wolves and Hardwood Paroxysm.

Taylor Gang: The Rise of Taylor Townsend and a Q&A With Her Mom