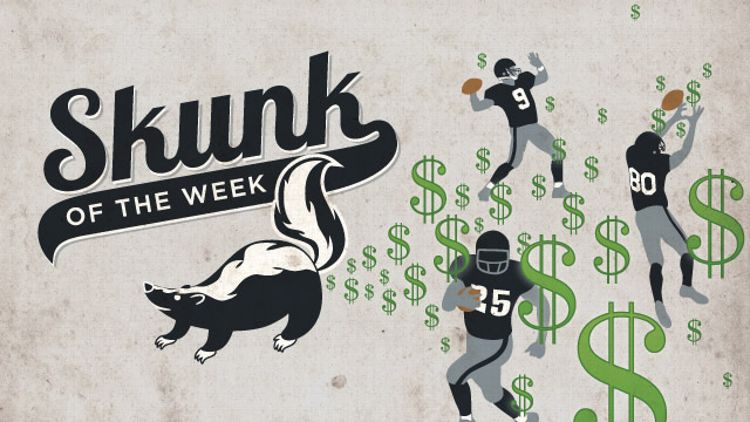 PATRIOTS (-11.5) over Jets
The case for the Jets: Last week New England barely beat Buffalo, a team that’s currently GETTING three points at home in Week 2 against Ron Rivera and Mike Shula … the Pats are missing their three best receivers from last year’s team, as well as their best receiver from this year’s team and their best all-around running back … the Pats have a no. 1 receiver this week who was targeted 14 times in Week 1 and somehow caught only four passes … there’s a chance Rex Ryan just says “fuck it” and blitzes Tom Brady every single down until he’s carried off the field … the overwhelming possibility of one of those ghastly, low-scoring, totally disjointed Thursday-night games with a deader-than-dead crowd and a frustrated Mike Mayock saying things like “These offenses just can’t get into any rhythm” and “Both of these teams look SO sluggish to me” (playing into the Jets’ hands) … Geno Smith doing a couple of Good Geno Smith things … the frightening possibility of a SportsCenter anchor at 1 a.m. saying, “Who would have thought the NEW YORK JETS would be 2-0 and leading the AFC East right now????”

The case for the Pats: Brady and Bill Belichick in a night game … Geno Smith doing a couple of Bad Geno Smith things … nobody in your fantasy league is starting a single Jet this week (and if they are, the owner is probably 15 years old or younger) … you needed one more fantasy running back for your bench, checked out Bilal Powell on the waiver wire for about 45 seconds, then said to yourself, “Nahhhhhhh … ” … Sunday’s comeback win roped Jets fans into being secretly intrigued by this team and maybe even having a few internal If the Pats suck this year, maybe we could go 9-7 and win the division! thoughts (even if they’d never admit it out loud), which never ends well for them … anytime New England’s crowd feels dead, they’ll just show the Butt Fumble on the video screen again … you’d feel 10 times dumber picking the Jets and getting burned than you would picking the Pats and getting burned … Geno Smith on the road … for a second time, Geno Smith on the road … and one last time, Geno Smith on the road.

The pick: I don’t like it, I don’t feel good about it … but I can’t take Geno on the road, especially when Gino (different spelling, but still) has been the video victory cigar for the Celtics since 2008. I think New England’s defense will cover this one by itself. Also, I’m a gigantic homer. Patriots 23, Jets 6.

Without further ado, the Half-Assed Power Poll for Week 2.

A STRONG WHIFF OF FRISKINESS
16. Philadelphia, 1-0

THE LEGITIMATE SLEEPER
11. The Lions of Detroit, 1-0