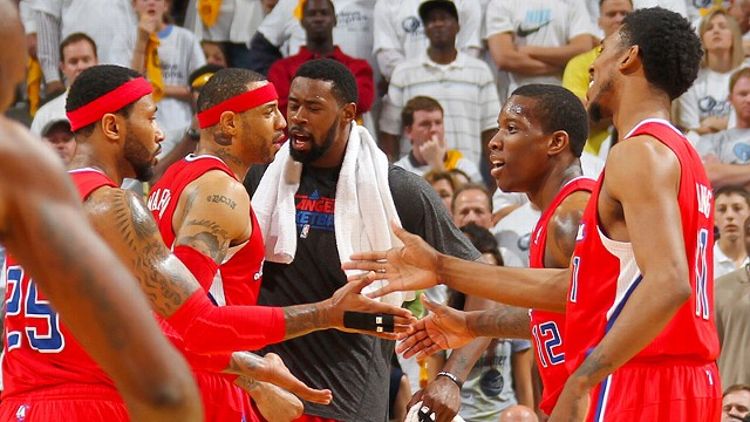 The Clippers and Their Sad, Effective Bench

As Chris Paul dribbled out the clock Sunday in Memphis, everything the Clippers had hoped for when he arrived had come true. In just one season, Paul managed to provide the franchise with both relevance and probably the biggest win in its history. What the Clippers did Sunday — on the road, in a building known for the grind — was play the type of game they didn’t always seem fit to play this year. The result was a kind of success that often seemed out of reach. So why, after all that, does it still feel like they’re doomed?

On Sunday, the Clippers’ bench was nothing short of excellent. Reggie Evans continued to be a force on the glass in the same way he was in Game 6 — a game in which he would have been the hero if L.A. had managed to hang on. Nick Young rode the loose grip he has on reality to a fearless nine-point fourth quarter. Kenyon Martin added 11 points of his own, while anchoring an L.A. defense that gave up just 16 in the final 12 minutes. There’s something to be said for having a roster full of guys who can come in and play like they aren’t afraid of these moments. The problem is there’s also something to be said about your stars sitting on the bench during the final quarter of a Game 7.

In Blake Griffin’s case, health concerns likely factored into coach Vinny Del Negro’s decision. Over the course of the series, Griffin adjusted to the tighter, slower pace of playoff games better than might have been expected. DeAndre Jordan has no such explanation. Where Griffin’s effectiveness in the half-court grind has been limited, Jordan’s has been rendered almost null. That, combined with how much better the Clippers are defensively with Martin and Evans on the floor, is the biggest reason to worry for Lob City as the team heads to San Antonio.

There won’t be a game in which the Spurs shoot 0-for-13 from beyond the arc like Memphis did Sunday, while Evans’s effort and Martin’s position savvy will be matched by the guys in the other uniforms. Credit is due to the Clippers reserves, but the problem is sustainability. Over an extended period, a lineup like Sunday’s will rely almost entirely on Paul to generate offense, and any other deprives L.A. of the defense that put them in the second round. It will be left to Del Negro to do what he did against Memphis and ride the hot lineup when it’s there. That, and pray that Paul is healthy enough to control the game.

Clippers celebrate in locker room around a sign that a Memphis fan threw on the court. twitter.com/LAClippers/sta…

Let’s Face It: We’re Headed for a Heat-Celtics Conference Finals

There was an eerie, sort of mirror-image quality to the Game 1s of this weekend’s Eastern Conference playoffs. Namely, that after the respective underdogs teased an upset through the first three quarters, the big, bad favorites seized power and victory in the fourth. How’d they do it? This is the playoffs: The team with the three best players always wins. And the Heat and Cs have the advantage of three veteran superstars, while the Pacers have an interesting but developing squad (plus Louis Amundson’s hair, not to be underestimated) and the Sixers are an uneven balance of long-suffering vets and scrappy kids. After trailing most of the game, Kevin Garnett, Rajon Rondo, and Paul Pierce scored the Celtics’ final 15 points to close out the Sixers. Then on Sunday, after the Pacers appeared to put a scare into the Heat in the first half — they’re big, they can shoot, and there are no expectations — LeBron James decided to start doing LeBron James things. He swarmed on D — Danny Granger was just 1-of-10 with seven points — and scored 26 second-half points. The man is good.

So what next? Are we spinning our wheels until the rematch (with a healthy Rondo this time) of last year’s conference semifinals? We’re not saying you shouldn’t watch these games. Definitely watch them. But it’s hard to imagine a world where we get that Spencer Hawes–Roy Hibbert matchup America has been begging for.

What an odd year for the Spaniard. Dealt to Houston, and then not. The subject of still more trade rumors. A forgotten cog in The Education of Andrew Bynum. Ignored and maybe unenthused through the first six games of the Lakers-Nuggets series, Pau Gasol was completely himself Saturday night. And after a lot of talk about JaVale McGee’s mystical arm length, Kenneth Faried’s dread power, and Timofey Mozgov’s subtle charm with the ladies (OK, maybe not that one), Pau outscored all three combined in the deciding game. He also pulled down 17 rebounds, hooked and dipped in the paint, and generally seemed just a little meaner than he has in a while. Alongside an inefficient but effective Bynum, the Lakers’ touted frontline turned away another pack of kids at the door.

“For an older team, it may be difficult. How do —”

And with that, Rajon Rondo, coming off his eighth career playoff triple-double, sonned David Aldridge into eternity. — Fennessey

Because he pinned it to the glass, amirite? — Fennessey

On Saturday night, the Celtics quite unsubtly told the Sixers that what they have may be of value — and young, and quick, and full of hope — but it can be taken away from them at any time. Playing like dreck for 42 minutes, Boston punched in at the last possible point and violently hijacked a Game 1 win from Philadelphia. That Rajon Rondo notched 17 assists is almost old hat; that he knocked down two huge pressure jumpers — one to give the Celts their first lead since the first quarter — is amazing. They came on two nearly identical plays: Paul Pierce drove right, drew the defense, and kicked left to an open, curling Rondo, who caught the ball in rhythm and calmly swished the bucket. Rondo hasn’t looked afraid to launch the ball all postseason, and has some uncharacteristically ugly field-goal tallies to show for it. But seeing him shoot, without a flicker of hesitation, and convert, when he absolutely needed to, felt like seeing him tick his game up one more notch.

Which is why the only correct response to Rondo’s jumpers was the one the Celtics bench provided. I’m not sure exactly how long it’s been going on, but Keyon Dooling once again led the way in choreographed cheering from the sidelines. Check it out on the right side of your screen at the 1:23 mark:

Kind of like an “I’m doing pull-ups at an extremely fast rate” thing combined with the way Rick Ross walks into the club? Very nifty, and lets everyone doing it look cool: Dooling and Ryan Hollins get points for being really, really into it, while Marquis Daniels gets credit for continuing to appear emotionless even while ostensibly displaying emotion. So, yes, get acquainted with the Celtics Bench Pull-up Rozay Dance 2012. Do it in your home, your workplace, while waiting in line for coffee, or while seeing Rajon Rondo cash clutch jumpers.
— Amos Barshad

Kobe Bryant and the Art of the Sideline High-Five

Kobe Bryant saw more double-teams than JCVD on Saturday night, but he managed the occasional feat of #heroball. First and foremost, a late-game, fall-away WOW dagger over Arron Afflalo from the corner, followed by a tumble into the crowd. At first glance, Kobe appeared to glide down the sideline untouched, fist pumping. Upon review, we see the patented celebrity high-five, courtesy of Justin Timberlake, who was wearing a stupid Justin Timberlake hat. But, um, JT, shouldn’t you have been at the Grizzlies game? — Fennessey

Oh No, Serena Williams Made a Rap Song