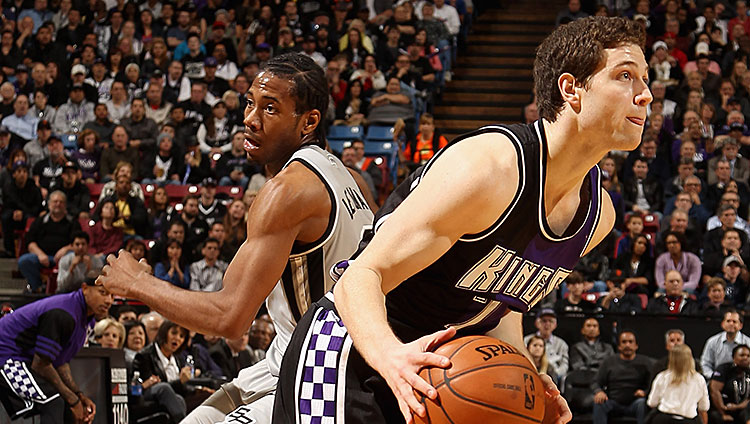 Last summer I found myself at a wedding talking with a Sacramento Kings fan. He was lamenting the fact that his team had passed on Kawhi Leonard in the 2011 NBA draft. They ended up with Jimmer Fredette instead. In 2014, Leonard is obviously the better player, but that’s easy to say now; hindsight is 20/20, and teams make wrong picks every year. In retrospect it’s not difficult to identify which teams made the best and worst picks in past drafts. It’s much harder to make those actual picks.

Every team picking in the NBA draft is charged with the unenviable task of projecting future performance based upon a dizzying number of variables concerning everything from amateur performances to psychology, compatibility, and injury potential. Still, while there is no shortage of proxies for potential value out there, drafting players remains far from an exact science. As a result, to paraphrase Donald Rumsfeld, there are known knowns, there are known unknowns, but there are also unknown unknowns, and sometimes left to their own calculus teams decide that Sam Bowie is a better pick than Michael Jordan.

While screwing up draft picks is a time-honored tradition in the NBA, these gaffes can drive wedges between front offices and their fan bases for decades; that’s why what the Kings did last week is so interesting. On Friday afternoon, the Kings introduced “Draft 3.0,” a web-based challenge designed to inspire members of the public to contribute to their 2014 draft process: 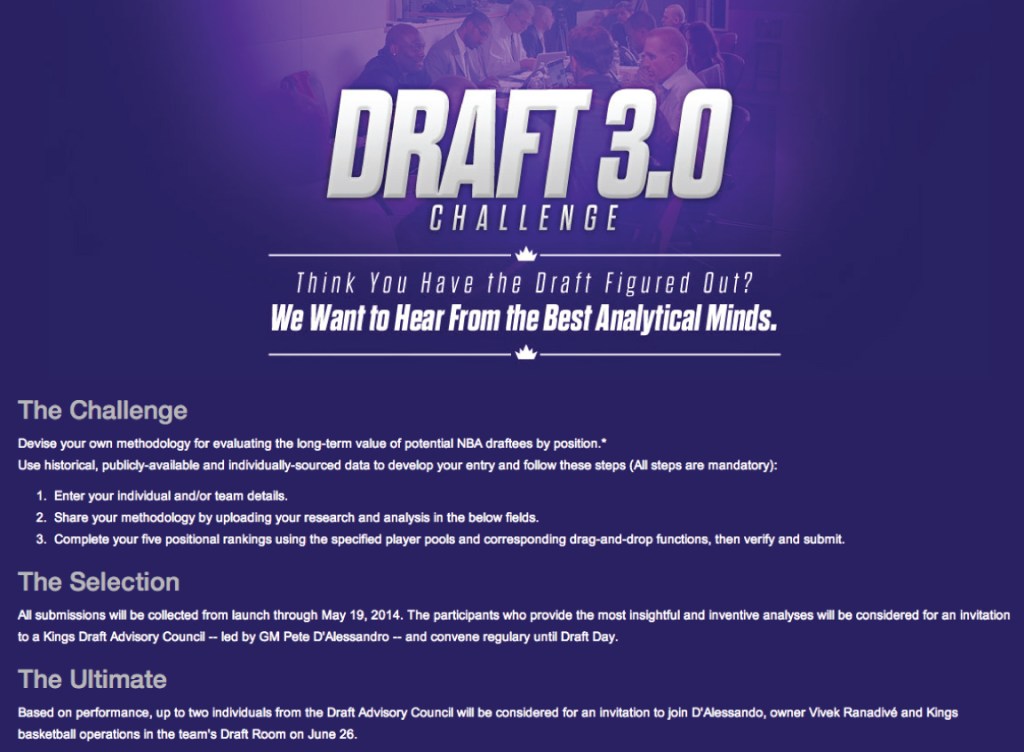 In short, the Kings are crowdsourcing analytical expertise, via an official web portal that enables participants to submit draft wisdom directly to the team. Kings GM Pete D’Alessandro introduced the project in  a Reddit AMA on Friday. Contestants have until Monday to submit their rankings.

The system is pretty straightforward: People access the site, rank draft prospects by position, and submit an accompanying methodology that explains how they reached their rankings. The Kings will evaluate the submissions internally and grant the top two submissions in the “Draft Advisory Council” an invitation to the team’s Draft Room on June 26.

It’s like American Idol for Chad Ford’s Big Board.

You might view this whole Draft 3.0 thing as a simple marketing gimmick, but given the rickety state of NBA draft analytics, you could also see it as as an earnest attempt to find supplementary intelligence on prospects. Figuring out whether Aaron Gordon or Marcus Smart will be better in the NBA is a very difficult task — these teams need all the help they can get. Regardless, the Kings are among the first American sports organizations to target the wisdom of the crowd and the talents of the unwashed. I love it, and at the very least, the Kings will get a mountain of additional feedback and a chance to evaluate thousands of potential employees for free.

Still, the true value of this Kings gambit comes down to this: Is the increased burden associated with sifting through thousands of online submissions worth the few nuggets of basketball wisdom they contain?

Your answer to that depends in part on your view of the “folk analytics” community and how it compares to the competence of the establishment. My own personal belief is that the analytical wherewithal of most NBA teams is generally both overstated and overstretched (which is evident in the league’s recent draft history), while the analytical potential of NBA superfans remains a massively untapped resource. I also suppose that some of the best basketball analysts on the planet remain undiscovered.

This perspective endears Draft 3.0 to me. Moreover, I also see this move as sort of an acknowledgment that not only do the Kings as an organization share a positive opinion on folk analytics, they also are aware of their own in-house limitations — an awareness that is quite rare in the NBA, where perpetually bad teams seem to sit back and watch as lottery pick after lottery pick doesn’t pan out.

This all brings me back to the Leonard/Fredette selection. You could say the Spurs drafted Kawhi Leonard, but it’s probably more correct to say they drafted and developed Kawhi Leonard. Back in 2011, he was a talented kid who couldn’t shoot a lick. If the Kings fans had picked Leonard three years ago, he may not have blossomed into the all-around force he has become. The Spurs are the model organization in the NBA in part because of the players they pick, but also because of how they mold those players after they’ve picked them.

Maybe Draft 3.0 will help the franchise make the right pick this year; who knows? The good news is that the Kings appear to have an energized and innovative front office, and that is going to be key as they begin next season with a roster chock full of unrealized potential; their real challenge involves maximizing that potential. Maybe Player Development 3.0 is next.