The Rise and Fall of Southampton 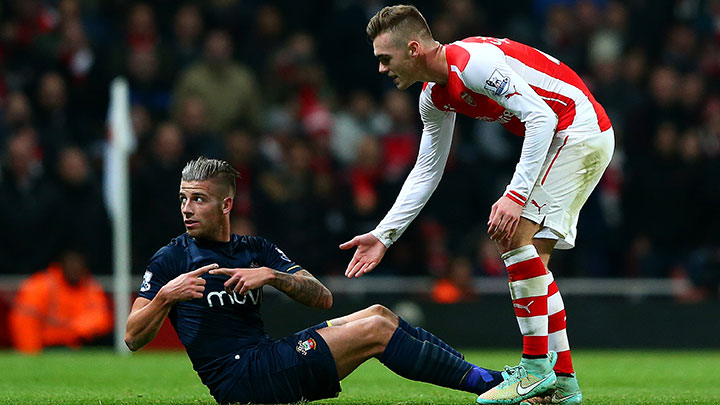 Just a week ago, Southampton sat in second place, comfy on 26 points, six goals conceded, and a seven-point cushion from the non–Champions League wasteland of fifth place. Then they played Manchester City and Arsenal, and now they still have 26 points, sit in third place, and are a too-thin-to-sleep-on two points from dropping out of the Champions League. So …

Is This the Beginning of the End?

Well, that’s one way to look at it. The week from hell could be a referendum on Southampton’s season. Sure, maybe they were good enough to beat the tar out of bottom-of-the-table riffraff, but when it comes to playing the big boys, Saints just can’t hang. They got pasted at home by Manchester City, despite playing a good portion of the game with an extra man, and they couldn’t even hold out for a draw at the Emirates against Arsenal. Lose again on Monday to Manchester United, and depending on results elsewhere, Southampton might be in fifth place. Thanks for playing Who Wants to Contend for a Champions League Spot?, guys. Better luck next year.

Or Does the Past Week Not Even Matter?

Southampton were so good against soft competition over the first third of the season that they gave themselves more than enough breathing room for when the schedule toughened up. Worst-case scenario: Come Tuesday, they’ll be a point behind West Ham for fourth, and that’s a team they could easily overcome. Plus, routinely beating weaker opposition? None of the other Champions League contenders have even been able to do that this season. While Southampton has dropped a grand total of five points at home this season, Spurs and Liverpool are still tripping over themselves, unable to advance past the starting line.

Either Way, This Team Is Pretty Good

Southampton’s point total heading into their tough stretch wasn’t a fluke. They ranked second in TSR, fifth in expected goals scored, and second in expected goals conceded.1 While the newly arrived attacking quartet of Sadio Mané, Graziano Pellè, Dusan Tadic, and Shane Long might be getting a lot of attention, it’s on the defensive side of the ball that Southampton have been dominant. Even including the last two matches, they’ve given up the second fewest shots in the league despite not playing a particularly possession-oriented style. 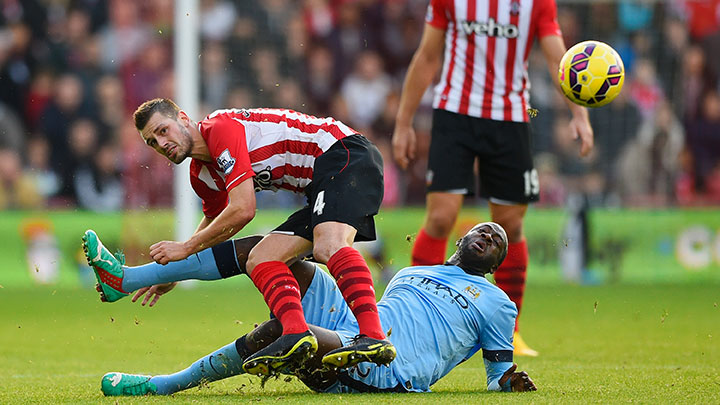 At Least, When They’re Healthy

That defensive presence starts with French midfielder Morgan Schneiderlin. Now under his third new coach and third new system, Schneiderlin has excelled no matter the situation. Except that Schneiderlin went off injured at halftime against Manchester City and didn’t play against Arsenal. It’s probably not a coincidence that moments later Yaya Touré scored from the area on the field — just clear of the top of the box — where you’d expect Schneiderlin to be the one closing down.

Starting center back Toby Alderweireld pushed up into the midfield to take over for Schneiderlin, a role he was forced to reprise against Arsenal when another midfielder, this time Jack Cork, was forced off injured. Then, adding insult (and injury) to injury, Alderweireld himself tweaked a hamstring after Southampton had used all their substitutes, forcing them down to 10 men with the game still tied. It’s never really fair to take three games as a referendum on a team, but it seems especially unfair to do so when that team is missing its best player for more than half of those games.

And Therein Lies the Core Issue

The problem with dismissing Southampton’s results due to Schneiderlin’s absence is that it ignores the squad’s biggest problem. The team simply does not have the same depth as the other teams contending for Champions League places. (Exhibit A: Koeman, unable to bring on backups at the same position, had to rearrange his lineup after both the Schneiderlin and Cork injuries.) Up until the City game, Southampton had managed to largely avoid injuries this season, due in part to no European competition. Meanwhile, Manchester City beat them without David Silva or Edin Džeko, and Arsenal won without Mikel Arteta, Jack Wilshere, Mesut Özil, or Mathieu Debuchy.

That lack of depth will come into even clearer focus over the next month. While most of the soccer-playing world takes a holiday vacation, the Premier League crams the games in. Starting on December 13, the Saints will have to play six times in 20 days. This stretch, which includes the brutal December 26/28 double for most teams, stretches even the biggest squads. Southampton is not one of those squads.

After hosting United to round out this week, Southampton have five games to get through in the Premier League (and an additional one in the League Cup), including matches against Everton, Chelsea, and the return fixture against Arsenal. If the cushion Southampton have built can last through that stretch, then we’ll have to not only talk about them as contenders for the Champions League, but quite possibly as favorites.

It’s pretty unlikely that Southampton emerges in the New Year with a fat point total and a healthy roster. But it’s also pretty unlikely they’ll have been utterly dismissed from the Champions League race. Their gloriously hot start — combined with the struggles of their expected competition — should keep them in the race over the second half of the season.

On Wisconsin: Melvin Gordon and His Madison Proving Ground