The Resurgence of Ivan Johnson? 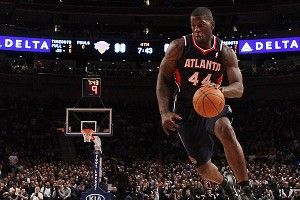 Before post-Linsanity and Linsanity, there was pre-Linsanity, also known as The Ivan Johnson Chronicles. During this roughly three-week period of time earlier this year, this interesting character known as Ivan Johnson took the league by semi-storm with his tendency to play like he was oblivious of being televised and talk to reporters like he oblivious to their pens and recorders. There was also evidence that suggested he couldn’t name five other players in the NBA, Atlanta Hawks included. What a legend.

But, as with many an important fad, the excitement rapidly began to die down. After declining minutes, a few pretty miserable games, and increasingly fewer reasons to get interviewed, it seemed as if Ivan’s time in the spotlight had come and gone. What a shame.

And then, last week happened. Word got out that Atlanta Hawks coach Larry Drew fined Ivan Johnson an “undisclosed amount of money” and sent him home from a road trip as result of “conduct detrimental to the team” stemming from a “verbal altercation” on the “bench.” It is at this point that I have to stop.

What on EARTH could Ivan have said that would have gotten him fined and sent home? What words could Ivan have strung together to have this labeled as “conduct detrimental to the team”? This is Atlanta we’re talking about, not the Utah Jazz.

To get sent home from a team that already endorses this type of behavior means that Ivan must have said some wild stuff. The immediate reaction to this news is that he must have cursed, or said some derogatory comment. That’s natural, but I don’t think that’s what happened. Not Ivan. It had to be something so startling and so bad for team chemistry that everyone just needed a day away from him to collect their thoughts. While those at the scene of the crime are the only ones that really know what happened, I have a few guesses that I’m pretty sure are close, if not spot-on.

Well, the time apart must have done some good, for both the Hawks and Ivan, because Monday night things finally came together. (Yes, it was against the Raptors.) Six Hawks were in double figures, Atlanta won by 22 points, Ivan had a career-high 21 points, and most important, he made the ever-so-coveted NBA.com “Steal of the Night.”

I don’t want to jinx it, but I think we might be seeing the resurgence of Ivan Johnson. I surely hope so, because this two-month hiatus from The Ivan Johnson Chronicles has been a dark time for all of us. In this new world of Tupac holograms and rumored Nate Dogg holograms, we need someone to bring us back down to earth. I think Ivan is just that man.