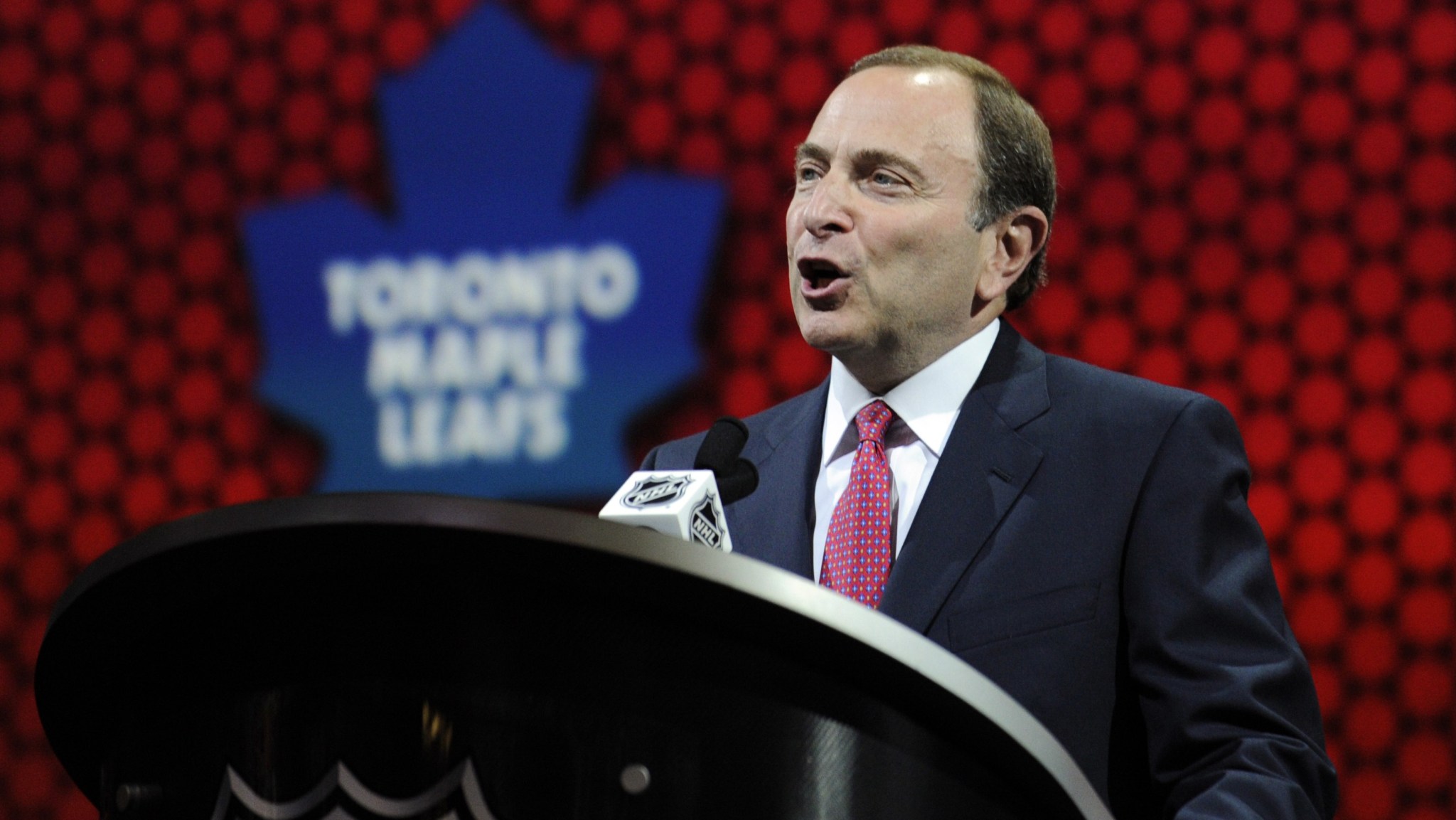 The NHL’s sleepy summer got a brief jolt when reports surfaced that the league was on the verge of adding four new teams. The league would be welcoming expansion franchises in Seattle, Toronto, Quebec City, and Las Vegas, we were told, and all four new teams would be up and running by 2017.

The league quickly denied the reports … kind of. It was one of those “there’s no truth to this specific story right now” sort of denials, leaving open the possibility that expansion could still be coming in the near future. And realistically, it has to be. With revenues at record levels, it seems inevitable that it won’t be long before the league expands for the first time since the 2000-01 season.

But should it? As with any major business decision, there are pros and cons to NHL expansion. Let’s run through some of the arguments that could be made on either side.

Pro: Money. We might as well get this one out of the way first, since it’s easily the biggest reason that we’re even talking about any of this. So: money. A very, very big pile of money.

The NHL and its owners will make a ton of money off another round of expansion. Initial reports estimated the league would be looking for a $350 million expansion fee for each new team,1 for a total of $1.4 billion. That seems like a big number, but Gary Bettman practically scoffed at it, suggesting the league would be aiming much higher. One report suggesting that bidding for a new Toronto team alone could start at $800 million and perhaps top $1 billion, which would be a North American sports record for an expansion fee.

Even better, at least from the owners’ perspective, is that the expansion fees won’t count as hockey-related revenue, which means it wouldn’t be shared with the players in the form of an increased salary cap. All of that money would essentially go directly into the owners’ pockets. That seems like a pretty easy vote to take.

Con: While the league would surely love to cash four new expansion-fee checks, there’s a legitimate question as to whether there are really four markets out there that could support a new NHL team.

While the league has never been more successful in terms of overall revenue, it’s not like demand for the product is soaring, and there are legitimate questions about the proposed destinations. Las Vegas has never had a major pro sports team, and Seattle doesn’t have an arena or any current plans to build one. Combine that with the fact that neither city is exactly known as a hotbed for hockey fans,2 and you get a decent argument that the destinations don’t make much sense.

Quebec City, of course, has already had an NHL team, which it lost in 1996 because of financial pressures. The league’s business landscape has changed significantly since then, especially as it relates to Canadian teams, so there’s a good chance Quebec City could work as a reclamation project in the same way that Winnipeg has. But it wouldn’t be a sure thing.

Meanwhile, it’s worth mentioning that not all 30 current franchises are exactly thriving. While nothing is imminent, struggling teams like the Panthers, Predators, and Coyotes could need to move someday, or at least want to be able to legitimately threaten it to squeeze more out of their current homes. They can’t do that unless there are viable markets available.

Pro: You’ll notice that we left one potential destination out of the last section, and that’s because there’s little doubt that the Toronto market could support a second team. The metropolitan area is home to roughly 6 million people, and hockey dominates local media coverage year-round. If the New York area can support three NHL teams, there’s no doubt Toronto could handle two.

One possible sticking point would be the Maple Leafs, who wouldn’t want to share such a lucrative market.3 It doesn’t appear that there’s anything in the league’s current rules that would allow the Leafs to prevent expansion, although that doesn’t mean they wouldn’t lawyer up and try. That could turn ugly, and it’s a good bet the league would work hard behind the scenes to make sure everyone was onboard before moving too far forward.

Con: Ideally, the NHL would declare itself open for business and then award expansion teams to the best markets possible, wherever they may be. But the league has already handcuffed itself somewhat, thanks to last year’s realignment that left the league with 16 teams in the Eastern Conference and just 14 in the Western Conference.

That would seem to mean any expansion would have to include at least two Western teams,4 putting Seattle and Las Vegas ahead of Toronto, even though the Canadian city is the better option.

Pro: They could just have the new Toronto team play in the Western Conference. No, it wouldn’t make sense geographically, but again — we’re potentially talking about a billion dollars here. Don’t overthink it.

Con: Speaking of geography, Las Vegas is way out in the Pacific time zone, and those teams often struggle to get as much media coverage as those around the rest of the continent. While the new team would no doubt get an initial wave of heavy coverage, it would quickly be forgotten after that.

Pro: Not necessarily. While it’s true that many media organizations might not cover the team, the really good ones would make sure to send their hockey writers to Las Vegas several times a year.

Con: Well sure, but that would only apply to the really top-quality sports site. We’re talking the best of the best.

Pro: True. Any site that aspired to that sort of quality would no doubt make sure its hockey writer was making multiple trips to Las Vegas each season. Uh, preferably on weekends.

[Editor’s note: This is embarrassingly transparent, and it won’t work.]

Pro: It was worth a shot. OK, back to the real arguments.

Con: Expansion means talent dilution. For each new team you add, you’re essentially also adding 25 or so jobs for players who aren’t good enough to play in the current NHL. Expanding by four teams leaves you with 100 minor leaguers taking up roster sports around the league.

Take a look at your favorite team’s fourth line or third defensive pairing. Those guys probably aren’t very good, and they’re probably not very fun to watch. Now imagine even more of those guys clogging up the league.

Pro: All of that is true, but let’s remember that the NHL hasn’t expanded in more than a decade. This isn’t 1967, when the league doubled in size in one shot, or even the ’90s, when it went from 21 teams to 30 in a decade. Adding two or even four teams would thin out the talent leaguewide, sure, but it wouldn’t be some sort of massive system shock.

Beyond that, it’s worth considering that a little bit of dilution could actually be a good thing. By adding a few more players at the bottom of the talent pool, you’re making things easier on the guys at the top. After all, if Steven Stamkos and Sidney Crosby can light it up against the league’s current players, imagine what they’d do with a few shifts against guys who are even worse.

The end of the six-team era in 1967, followed a few years later by more expansion and the WHA absorption, caused an unprecedented watering down of talent, as the size of the league more than tripled. But that bloating helped create the greatest offensive era the league has ever seen. We wouldn’t see that sort of impact this time around,5 because again, we’re talking about a comparatively minor increase. But adding a few more turnstiles around the league wouldn’t be the end of the world.

Con: The new teams would probably be terrible. Granted, we don’t know how the expansion draft would work, but we can make some assumptions based on history. NHL expansion teams typically start off awful, and some of them stay awful for a very long time. In a world of salary caps and three-point games, hockey fans have grown accustomed to leaguewide parity. Do they really want to see four miserable teams locked into the bottom of the standings for years to come?

Pro: Did somebody say expansion drafts? It’s been 14 long years and counting since hockey fans got to enjoy one, and that’s far too long, because expansion drafts are the best.

And that’s not just the drafts themselves, but all the speculation and maneuvering that go along with them, as teams try to protect their best assets while figuring out whom to expose. During the wave of ’90s expansion, new teams didn’t get much talent to choose from, and often ended up trading away many of the guys they did choose for future draft picks. That sort of scenario would probably play out again, and the resulting teams would indeed be terrible, but it would still be fun to watch.

We’ve also never been through the expansion draft process in the salary-cap era, which would add an extra wrinkle of intrigue as teams intentionally exposed their worst contracts in the hopes that one of the newcomers would pick them up. That could actually happen, since expansion teams would presumably still need to reach the salary floor. And yes, this whole paragraph is just me trying to talk myself into a scenario in which the Leafs could somehow dump the David Clarkson contract, but let a guy dream.

Face it, an expansion draft playing out over Twitter would be just about the greatest thing ever.6 Would that be enough to make expansion a good thing all on its own? Maybe not. But yeah, quite possibly.

Con: This is the NHL. It’s going to screw this up somehow.

Bettman took over in 1993. Since then, the league has added four teams and moved four others. While some of those new markets have been successful, we also wound up with struggling franchises in places like Nashville, Phoenix, Carolina, and Atlanta (the last which has already failed).

And now they want to add four more teams. Does anyone really trust these guys to go four-for-four?

Pro: Yes, of course they’ll screw it up, but that doesn’t matter. Just like the arguments over market strengths or territorial rights or realignment or talent dilution don’t matter. There’s just too much money riding on this for any of that stuff to get in the way. These owners have shown they’ll shut down the entire league just to squeeze a few extra million out of the players. You don’t think they’ll take the first realistic opportunity to fill their pockets with billions in fees from new partners?

Expansion is coming, so we may as well learn to accept it. At least we’ll have a few expansion drafts to look forward to.

(Preferably in Las Vegas. In fact, I think I better head there this weekend to scout out possible locations.)