The Place for Doubt in the Celebrated Return of Ricky Rubio 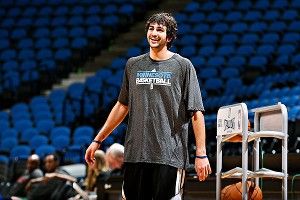 With nine minutes left in the fourth quarter of the Timberwolves’ November 16 loss to the Warriors, a middle-aged couple descended from the stands at the Target Center, ostensibly on their way out. After bypassing the exits, they eventually reached court level and paused behind the Timberwolves’ bench, where Ricky Rubio was perched in a black folding chair. Inches away, but just out of Rubio’s line of vision, the woman posed while her companion snapped a photo.

A security guard stopped them shortly after, stepping in just as the line between excited fans and crazed invaders of personal space was crossed. The two laughed, and turned back into the stands. Turns out, it hadn’t been a stop on their way out. This was a short Ricky pilgrimage, a chance to get close to the point-guard-cum-pop-idol who’s risen to a mythical status among fans in Minnesota over the past eight months.

When Rubio tore his ACL March 9 and the Timberwolves’ charmed season fell apart, the Spaniard’s cult following grew larger than ever before. Even noted curmudgeon Rick Adelman admitted he hadn’t realized Rubio’s full import to the team, both on the court and off. The locker room was quieter, practices became lifeless, and a team that had been convinced it was only getting better was crippled by the belief that it couldn’t do so without Ricky. Now, just eight months after surgery, and with Minnesota sitting at 8-8, Rubio’s return looms, and with it, the hope that a team that’s managed to stay afloat without him will leap forward with him. That’s a lot for a 22-year-old who’s played a grand total of 41 NBA games and was falling off last season even before his injury.

Point that out to Rubio, and he’ll smile and shrug. “I know that it was tough,” he says. “And now I’ve been out for a long time. But I don’t look back. I just want to look forward. Once I’m done playing basketball, I might look back and be proud of what I did, but right now I just only want to keep moving forward.”

He doesn’t take this lightly. In spite of that lilted accent and those long eyelashes, he’s no clueless kid. Rubio knows that the anticipation of his return is likely to leave some people disappointed. It’s because he doesn’t have faith in his ability to reclaim his early-season magic — at least not right away.

The latest in a state’s familiar history with mini-tragedy. (Steve Marsh, April 5, 2012)

He talks about easing back in, playing limited minutes at the start (although he does admit that “once I’m out there, I don’t think I can handle [coming out]”), and the adjustments the new-look Wolves will have to make to the ridiculous things he does. In the opening games last season, teammates would laugh about his passes between opponents’ legs, about not expecting the ball only to find it in their hands. They were both amazed by the rookie’s skills and terrified about learning what to anticipate. That’ll happen again this year — just one hurdle of Rubio’s return — and even in the giddy state he reaches when thinking about the ever-nearing future, Rubio is decidedly realistic.

Throughout this process, Rubio has learned more than he ever wanted to about patience. He says it’s been difficult not to push too hard, especially when he would see progress and want more. There were months of inactivity, to the point that this summer in Spain, Rubio decided he was overweight and had to get back on the bike. When he got back to the U.S., the shooting began — flat-footed at first, each time willing himself never to leave the ground. The jump shots came in October. November was lateral movement. Now, he’s darting and cutting and showing hints of all the very Ricky things that made him such a sensation last winter.

Much of Rubio’s recovery — the drills and the conditioning — has happened behind drawn curtains and closed doors. To watch Rubio’s recovery is to see one thing: shooting. To anyone who covers the team, it seems that all Rubio does is shoot, shoot, shoot, all with assistant coach and former point guard Terry Porter. In his recovery, Rubio was limited the longest with lateral movement, cutting, dribbling — all the things he’s known for. But he’s been able to shoot for months, and in doing so, he’s addressed the weakest element of his game. He’ll never be a talented pure shooter, but Rubio’s long-range shot, at least in these sessions, has improved immensely. The hope is that the post-ACL Rubio will be able to stretch the floor and show a three-point stroke that acts as a backup plan to the pick-and-rolls he loves so much.

He lists off each skill faster and faster. For a moment, he’s not a 22-year-old NBA player; he seems younger, an unproven kid dizzy at the idea of what he might become.

“I just want to be better.”

Rubio’s shooting is just one of the areas where Minnesota is looking for benefits. Another is his chance to watch and learn from the bench, to ease his way back into a league he was thrown into last December.

Spin it the other way, and Rubio’s shooting repetitions become an exercise in honing a skill that will never be a strength, all the while losing the polish on the signature parts of his game. It might be more realistic, but no one’s thinking that way. Not in Minnesota, not when Rubio is the second piece of a one-two punch the organization has been missing since the days of Kevin Garnett and Stephon Marbury.

Ask Rubio if he thinks the skills he never had to learn will return, and he sighs.

“I hope,” he says. “We’ll see once I come back. I think you have to practice, but those things are natural, so they come with you.”

Right now, so much is imposed from outside. There’s the idea that he’s the key to an entire team’s success, the magic it’ll need to get back to the playoffs. There are the forced comparisons to every noteworthy point guard of the past decade, which Rubio accepts but deflects. He’s watched them all, studied them, learned from them, but charm and success are a product of the wholly unique place he’s carved among fans and teammates. Just ask Kevin Love: “The only way that we’re going to be the team that everybody hopes for us to be is that Ricky has to be Ricky … At the end of the day, Ricky Rubio just wants to be Ricky Rubio and nobody else.”

After his six seasons as a pro in Spain and those first 41 games in the NBA, we knew who that Ricky Rubio was. We knew about the vision and the instincts, the game that was mostly intuition. When he returns, we’ll wait to see if that needs to be for better or worse.

For now, Rubio will wonder about that wall he says will come at some undefined point after his return. The injury is like a specter, no longer physical, but still lurking. He’ll smile and reassure you that he knows he’s fine — that he’s better, even, with all that shooting — but Rubio is too smart not to hedge his bets, to acknowledge how uncertain everything about his return still is.

“I don’t know,” he said of his expectations for the season. “I’ve just been prudent. I’m just trying to be me, trying to do as good as I can.”

He’ll say things like that, walk away, and talk casually to a teammate. Then he’ll twitch to the side and launch a half-court shot mid-conversation. And it’ll go in. Rubio won’t watch, won’t even see where it lands, and once it’s swished through the net and bounced away, you’ll realize: Shots like that aren’t supposed to go in. You’re sure of this. Only no one’s told Ricky Rubio that.

Joan Niesen (@JoanNiesen) covers the Timberwolves and the NBA for Fox Sports North in Minneapolis.