The Philadelphia 76ers and the NBA’s Middle-Class Dream 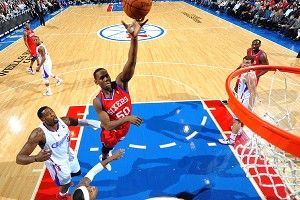 During the NBA lockout, the narrative unspooled by the vipers on the ownership side was that the league was in danger of being cleaved into two types of franchises. A small number were big-market teams in glittering, spired metropolises that collected superstars with the craven lust of billionaires taking trophy wives. The rest were clubs in backwater cow towns that collectively acted as a de facto farm system, nourishing ungrateful talent that fled to places with sunny weather and Fashion Weeks. It was heartbreaking enough to make Sweet Baby Gilbert cry.

But as we have seen in Miami, New York, and Los Angeles, a clusterfuck of superstars does not necessarily guarantee dominance. With the current salary cap, locking down three players with princely contracts means the rest of the roster will be fleshed out with unproven youngsters, waiver-wire offal, and veterans with one chipped hoof in the glue factory.

Maybe somewhere, though, between the Parnassian peaks where the haves frolic and the swamps where have-nots lurk, a third path exists. Yes, the NBA’s middle-class dream is alive in Philadelphia.

Despite a roster devoid of household names or blossoming young stars, the Sixers are 20-9. Resting atop the Atlantic Division, they own a four-game lead over the Celtics and are six and a half games ahead of the resurgent Knicks. Philly’s winning percentage is behind only those of Oklahoma City, Chicago, and Miami. No one is comfortable saying or really believing it, but the Sixers are one of the best teams in the NBA.

Just a few weeks ago, this team was dismissed as the beneficiary of a schedule that was less challenging than the syllabus at Waka Flocka Flame’s Geometry Camp. It was true. Over the first month of the season, Philly exploited the league’s underclass with the pitiless glee of a Rent-A-Center peddling plasma TVs in the South Bronx. They obliterated Washington three times, by an average of 21 points. They sacked Detroit twice, by an average of 22 points. Golden State was annihilated by 28. Sacramento by 27. In mid-January, they were dismantling opponents by an average of 14 points.

Critics pointed to several of the Sixers’ early-season losses as evidence that they were fat-bellied bottom feeders who couldn’t beat quality opponents. Fair. They lost by four to Portland. They lost in overtime to Denver. Over the weekend, they lost a nail-biter when Chris Paul’s fadeaway in the closing seconds eked out a Clippers win.

Starting in late January, the Sixers made the skeptics swallow their words. In a little over a week, they beat the Magic, Bulls, Hawks, and Lakers. Their only loss was a torching by the Heat. At this point, Philly has shown that they can play with everyone else.

In this compacted season, the Sixers have some advantages. First, they’re young. The faces of the team are Andre Iguodala and Elton Brand, but they’re basically the only contributors who can rent a car without getting stung by under-25 liability fees. The Sixers’ collective hummingbird metabolism ensured they didn’t pack on a girdle of blubber during an offseason of inactivity.

Unlike teams who are baffled by trying to shove Carmelo-shaped objects into unselfish holes, Philly has plugged along with essentially the same group for several seasons. And its players have defined roles. Iguodala is a distributor. Lou Williams is a scorer. Jodie Meeks shoots. Lavoy Allen brings the ruckus.

Philadelphia is also deeper than the mind of Minolta. Williams, the team’s leading scorer, comes off the bench. This year, he has played better than Monta Ellis, whom basketball minds regard as a star. Per 36 minutes, they average almost exactly the same raw numbers: 22 points, three rebounds, and five assists. But Williams turns the ball over less, shoots better from 3-point range, has better offensive and defensive ratings, and has racked up much higher win-shares per 48 minutes. Thaddeus Young, a polished tweener forward, comes off the pine too. And so does Evan Turner.

The impact of young legs, identifiable roles, and a bunch more young legs has been profound. Spurred on by relentless motivator Doug Collins, the Sixers throttle opponents on defense. They have collegiate scrappiness, and Philly’s fast, undersized defense is more obnoxious than frightening. They sling themselves to the floor chasing every loose ball. They prod at every rebound. They even spring an occasional full-court press. When the Sixers trounced the Bulls in early February, it was easy to understand why the Chicago players wilted in the third quarter. “There is a lot of energy on that team,” Derrick Rose said, after the light drained from his team’s eyes. “They were hungry and wanted to prove a point.”

The Sixers’ transition from a team constructed around the singular, glowing talent of Allen Iverson to one composed of altruistic choirboys has not been pretty. Back in 2006, when the Sixers traded The Answer to the Denver Nuggets for a stinking bucket of fish guts, it allegedly marked the beginning of a rebuilding era.

Instead of curling into a fetal position and absorbing kicks until the NBA’s welfare system provided relief through the draft, the organization was quixotically dedicated to striving for mediocrity. It declined to trade Andre Miller, allowed Joe Smith to audition for free agency with substantial late-season minutes, and finished with a meaningless 16-9 spurt to ensure its collection of balls in the lottery dwindled. The following season, they scrambled to a 40-42 record and an 8-seed in the playoffs — a berth more indicative of neutral buoyancy than bubbling potential. Still, this faint aroma of success encouraged the signing of Brand, who became a cap-feasting albatross after playing only 29 injury-plagued games in 2008-09.

By refusing to ever punch the reset button, Philly missed out on Kevin Durant, Derrick Rose, Kevin Love, Russell Westbrook, or any other young player that could alter the future as magnificently as a hot-tub time machine. When fate finally smiled upon the Sixers, handing them the second overall pick in 2010, they selected Turner, who just recently swapped his “bust” dunce cap for a “solid contributor” newsboy chapeau.

Even without any transcendent talent, the Sixers have amassed a ransom of complementary pieces that allows them to defeat less-cohesive teams. They didn’t dump quality personnel to free up cap space. They haven’t signed overpriced veterans. And they’ve done a slick job of drafting extremely young players and locking them down with reasonable deals before they hit their prime. Philly is suddenly a model for off-brand success — it’s impossible to tell if it can be duplicated, or if they’ve stumbled upon this formula by dumb luck. Shit, a cynic would still suggest that they figure out a way to trade half their roster for Dwight Howard.

The team’s rise is especially redemptive for Iguodala, who has been the subject of trade rumors since the ink dried on his six-year, $80 million deal in 2008. There were good reasons for jettisoning the team’s best player: He was overpaid, Brand’s immovable contract necessitated finding flexibility elsewhere, and the Sixers amassed a logjam of talent at the swingman position. But most of all, he wasn’t the type of player the organization hoped he was.

But, like the all the current Sixers, Iguodala is now being used correctly. He’s no longer the team’s first scoring option. In fact, he’s closer to its third. That’s OK. Someone else can take the final shot. Let Iggy be a plowshare instead of an ill-formed sword. In the Sixers’ win over Atlanta last week, Iguodala went 3-for-15 from the field and scored nine points. But he chipped in 10 assists and eight rebounds while limiting Joe Johnson to 16 points. A few days ago, Iguodala was named to the All-Star team for the first time.

For Iguodala and the Sixers, a surprising season keeps getting better.

Blake Griffin Is the Plastic Bag From American Beauty