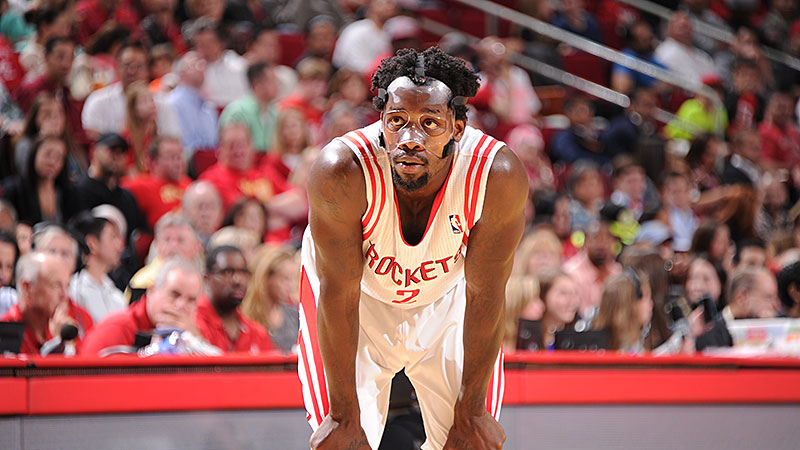 Chris Ryan: Coming into the season, Patrick Beverley was the “man who ruined the Thunder’s chance at a title” with his cheap shot on Russell Westbrook in the playoffs. At the time, I feel like people gave him a break for playing hard and suggested it was an accident.

Russell Westbrook said he has no grudge against Patrick Beverley, but grew agitated at the topic, saying "no more questions about that."

I think, considering this season, we can safely say it was NOT an accident. Patrick Beverley is here to chew bubblegum and drive you insane, and he’s ALL OUT OF BUBBLEGUM.

Look what he did to Jrue Holiday there. That’s during a preseason game!

From Damian Lillard (“I’m not going to buy into it, but I’m also not going to just let it fly. I’m going to say something. I mean, that’s what he does. I don’t really care for that, but I’m just not going to let somebody be all in my chest, doing all this extra stuff. That’s not basketball”) to Chris Paul to DeMarcus Cousins to the entire Miami Heat bench, Beverley is on a mission to never get invited to a postgame dinner. And he’s totally changing the character of the Rockets.

Andrew Sharp: Dwight Howard in the post is miserable to watch, ditto for Harden flopping his way to 10 free throws a game, and Jeremy Lin and Chandler Parsons are both kinda overrated … but Patrick Beverley? He’s so perfectly obnoxious and unbearable that even a Rockets hater like me can’t help but respect him.

Look, maybe he’s being honest there, but I don’t know. Remember this quote when Patrick Beverley starts the biggest NBA fight since the Malice at the Palace:

He’s hacking guys every time they cross half court. When it happens once or twice, it’s an accident. After two years in the NBA? It’s a strategy. If there were chop-blocks in basketball, he would lead the league.

That is definitely a lie.

No player in the history of the NBA has ever said anything positive about Patrick Beverley.

And that’s why you can’t help but love him.

Bill Simmons: I fell in basketball love with Beverley at a Clips-Rockets game earlier this season. He spent the entire game agitating Chris Paul, defending him for 94 feet, making him miserable and basically trying to start a fight with him. You know what was interesting? CP3 didn’t really want any part of it.

When the Rockets were losing near the end, Beverley got pissed that CP3 flopped for a charge call, then retaliated a little bit later by karate chopping CP3 for his sixth foul. Then Beverley stomped by him on the way to Houston’s bench and inexplicably tried to poke-check the ball away. The whole thing was awesome. Those guys might reenact all three Ali-Frazier fights in a seven-game series.

He’s like one of those old-school playoff hockey antagonists (think Claude Lemeiux back in the day, or Brad Marchand right now) who thrives on pissing off opposing players, coaches and fans, to the point that you keep waiting for someone to sucker punch him in the handshake line after the series ends. He’s going to be an unbelievably entertaining X factor for the playoffs. I love him to death. He’s single-handedly turning the Rockets into a tough team. And by the way? I would HATE playing against him. Wouldn’t you?

Ryan: Ramona Shelburne was in the office yesterday and had the idea to call Patrick Beverley “Spartak,” after his Russian pro team, Spartak St. Petersburg. I also like the Itch, the Terrier, and PIA (Patrick/Pain in the Ass).

Sharp: Every high school basketball team has a Patrick Beverley: someone who’s not that good, tries way, way, wayyyyyy too hard on defense, and drives everyone else insane. One of my friends was like this as a freshman in high school, practicing with the varsity. He played that way for two weeks before one of the seniors stopped a scrimmage and punched him in the face. Which, coincidentally, already happened to Patrick Beverley.

Anyway, I love Spartak. Because for some reason the word “Spartak” makes me imagine this weapon: 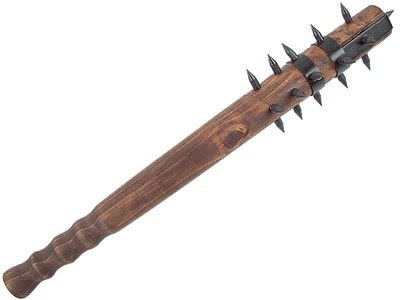 And that weapon reminds me of Patrick Beverley on a basketball court.

Simmons: I may or may not have done some Beverley YouTubing to see if he had started any melees already. I knew that Boogie Cousins punched him and Marc Gasol shoved him, but did you know about his pseudo brawl in the Olympiakos-Malaga match in 2009 (1:30 mark)? By the way, this is my favorite Beverley YouTube clip. It explains everything. He’s just a badass. DO THE DAMNED THING, SPARTAK!

Ryan: Another nickname idea: THE HORSE THIEF. Back in the Wild West, horse thievery was worse than killing a guy. Sure, you might have a saloon disagreement and murder someone in a quick draw. These things happen. But stealing a guy’s horse? That’s just low.

This is Beverley. He will do anything it takes to gain a competitive advantage. Even steal your horse. You’re going up for a dunk? Cool, Patrick Beverley is going to take your legs out. You think it’s all good, dribbling toward the sideline as you call timeout? Spartak is diving at your knees, meniscus be damned.

My favorite Beverley beef this year is definitely Boogie. Now obviously Cousins loses his mind if the Suits he DVR’d is a rerun — he doesn’t need an excuse. But check this out:

What a perfect union of jerks. I love them both.

Simmons: Got this email recently from Anupum in Astoria, New York.

“On your last podcast with Zach Lowe, you were so close to getting around to the right nickname for Patrick Beverley! You mentioned ‘Pit Bull’ and then referred to him as ‘Avery Bradley on Red Bull.’ Why not the Red Bull? Fits the uniform color, his style of play, etc.”

So why wouldn’t “Red Bull” work? What am I missing? It’s certainly a better idea than the guys who emailed me trying to nickname Beverley either “The Doberman” or “The Pat Bull.”

Ryan: I also think Red Bull would work. It fits with the Rockets’ color scheme, and the endorsement opportunity is right there. Red Bull gives you wings. Patrick Beverley tears them off.

Totally agree that he changes the character of the Rockets. I watched them play the Clippers at Staples in the beginning of the season, and Beverley was out with an injury. They were running Jeremy Lin and Aaron Brooks out there (this was also the era of Omri Casspi, stretch 4). With Lin running the team, everyone just seemed out to lunch. Harden dominated the ball, and Dwight seemed bored with no touches. Parsons was actually the team’s toughest competitor.

Lin is an afterthought now (he looked good against Portland, but before that was playing about 15 minutes per game). Harden and Howard might be the faces of the franchise, but Patrick is the heart. He makes them feisty. I loved how they mixed it up with the Pacers last Friday (that is, until David West got involved … let’s be honest, there are limits to the Beverley influence). This was always going to be a good offensive team that could pour on the points. With Patrick they actually have some swagger. I never thought I would say this about this Houston team, but they’re pretty tough!

Simmons: You could also talk me into Patrick “Mad Dog” Beverley. Our greatest Mad Dogs ever were Fred “Mad Dog” Carter (NBA player), Chris “Mad Dog” Russo (sports radio host), Mad Dog Vachon (wrestler) and “Mad Dog” Mark Madsen (Lakers 12th man). None of them are that relevant anymore — at least until Russo teams up with Mike Francesa again. And it’s such a great nickname. Aren’t we due for another Mad Dog? Do you like Mad Dog or Red Bull more?

Sharp: The problem with Mad Dog is it’ll remind people too much of Chris Russo. No NBA player should ever make people think of a talk radio host. So that leaves us with Spartak or Red Bull.

I’ve already voted for Spartak, but the more I think about it, that takes too long to explain and really only works if you inexplicably imagine a spiked weapon along with it. It’ll never catch on with the mainstream.

Red Bull, though? A brand name that everyone knows? Something full of unnatural energy that’s almost definitely hazardous to public health?

It’s too perfect to deny, and it makes me love Patrick Beverley even more than I already did.

Anupum from Astoria had it right all along.

Long live Red Bull, the heart and soul of the Houston Rockets. Can’t wait till he starts a full-court brawl in the playoffs.

Dallas Seavey has won the 2014 Iditarod. Grantland's Brian Phillips was on the scene for last year's race; you should read his dispatch from Alaska.