The Making of Medora: Indiana High School Basketball and a Friendship Between a Filmmaker and His Subject 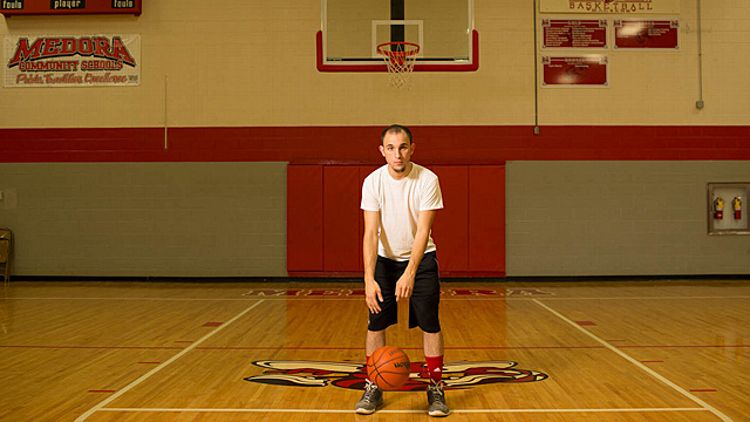 On a bright and cold afternoon almost exactly three years ago, I climbed onto a school bus with my camera and tripod. Staring back at me were 15 sullen high school boys.

This was my first day filming a documentary, Medora, about a tiny, dwindling town in Indiana and its high school basketball team, the Medora Hornets. My codirector, Andrew Cohn, and I had read about the town and the team in a poignant New York Times article by Pulitzer Prize winner John Branch. The article reveals a mostly shuttered town, knocked to its knees by the closing of factories, and a team composed of players so poor that some play games in work boots. They’d gone 0-22 the previous year. Gripped by their story, Andrew and I decided to move to Medora to film the Hornets’ next season and document the lives of its players. It sounded like an awesome plan, but it felt significantly less awesome the first time I found myself facing a bus full of glaring, reluctant subjects.

“Hey, you can sit with me,” a kid toward the back said softly. He introduced himself as Dylan McSoley, and I learned that he was the team’s starting 2-guard. On the way to the game, we talked a bit. Dylan was 17, a junior; he’d just transferred into Medora High School a couple of months before. He told me he was considering becoming a preacher, and before we pulled up for the game at rival Crothersville High School, he spent a few minutes studying passages from his Bible, softly mouthing the words. The Hornets probably could’ve used some divine intervention — they got trounced by 25 points. The year before, they’d lost their games by an average margin of almost 40.

On our way back to Medora, I asked Dylan if I could bring my camera over to his house for an interview. “Sure,” he replied. “Don’t see why not.” Our producer Rachel Dengiz and I followed him down winding rural roads to his home. He introduced us to his grandma, explaining that he’d recently moved in with her since things were so hectic at his mom’s place. Apparently, he’d been sharing a single bed with two younger brothers, but now, at his grandma’s, he had his own room.

For two hours, we sat in Dylan’s bedroom, filming him while he shared moving stories about his life’s path. Dylan had never met his dad. His family life had been tumultuous, always moving from one place to the next. Now, at least, at his grandma’s, he’d found a bit of stability, though he still occasionally went dumpster diving for clothes. He showed off his few possessions, draped over a furnace — a New York Mets cap, a University of Illinois jersey, a few baseball and basketball trophies he’d earned in junior high. It was almost eerie how comfortable Dylan seemed to feel around the camera, and how plaintively he answered our sometimes probing questions. It seemed that no one had ever asked Dylan for his opinions of the world or to tell his own tale, and before our eyes he seemed to bloom from the attention. At the end of the night, we hugged him and told him we’d see him at practice the next day. That quickly, a friendship had been born.

In the months that followed, I spent more and more time with Dylan. Two or three times a week, I’d hang out at Dylan’s grandma’s house, watching Big Ten basketball games on the living-room TV while he told stories about his day and caught me up on his and his friends’ romantic entanglements. Though he was a deeply spiritual kid, he was also fun-loving and mischievous, and not immune to the kind of hormone-fueled instincts of any teenage boy (he seemed to have a different girl on his arm at every church function or team pizza party). I followed him to Sunday service, to his mom’s public housing unit to visit his family, and on Friday-night dates to the bowling alley, watching his life unfold through my Sony viewfinder. On the way home, we’d reflect on how each event in his life had gone, laughing and sometimes Monday-morning quarterbacking his romantic decisions. “I should’ve tried to kiss her!” he’d groan. “Dang it, I was too scared!”

Dylan, to me, felt like an enjoyable kid brother, but he told me once that I was like the dad he’d never had. I was only in my mid-thirties, but that happened to be the same age as most of the parents of Dylan’s friends and teammates. As a documentary filmmaker, I’ve learned that the closer you get to your subjects, the harder it becomes to keep your role in their lives from expanding beyond being the guy with the camera. I found myself dispensing sex-ed advice, dispelling some outrageous notions Dylan had heard from friends. “Dip your finger in, then wipe it on your belt buckle,” he once explained to me with full sincerity. “If it turns green, don’t have sex with her.” From then on, I made sure he always had condoms. I helped Dylan plow through math problems. We talked about politics. I introduced him to my other favorite documentaries, like Hoop Dreams, American Movie, Hands on a Hard Body, and Dark Days. He seemed to have a natural understanding of the form. Once, while I filmed him driving home from school through Southern Indiana’s rolling hill country, he asked, “Are you going to show this footage of me driving, but then use the sound of my voice talking about something else?” We even worked on his game together, shooting baskets in the gym after practice let out. I encouraged Dylan to sharpen his perimeter shot and become a lockdown defender, and I felt a bit like a proud dad when he’d hold opponents’ leading scorers to single digits, even as his team continued to get blown out, game after game.

By this time, I’d also grown close to other players on the Hornets, but I ended up spending more time with Dylan than anyone else, perhaps because his life at home was so solitary, and he’d often text me to see what I was up to. Our friendship was a two-way street — it wasn’t just me grilling him about his life. Dylan was endlessly curious about my world in Los Angeles, my friends, my college experience, and my creative life. He razzed me for my die-hard allegiance to the Michigan Wolverines, but cheered for U of M as though it was his own team when we played against Indiana. (A nonconformist, Dylan’s favorite team was the Fighting Illini, although he lived deep in Hoosier country.) Some nights, if he sensed I was feeling down about work or my own love life, Dylan found ways to lift my spirits, showing me silly, ridiculous clips on YouTube. Despite the crushing hardships that Dylan had endured, he’d grown to be a kind, upbeat, courageous, and resilient young man, and I felt lucky to count him as a friend.

Once the season ended, I headed back to L.A., with the promise to Dylan that I’d stay in touch. But I recognize now that I’d underestimated the closeness of our connection and the effect it might have on him when our entire filmmaking crew — many of whom he’d grown close with — all ditched town and returned to our normal lives. We began to dig in to the more than 600 hours of video we’d collected during our time in Medora, but even as we spent every day immersed in footage, hanging with Dylan remotely while logging endless hours of interviews with him, Dylan, naturally, may have felt left in the cold. A kid who’d been abandoned throughout his life had now essentially been abandoned again. When we did talk, he sounded distant, and his interest in school was waning. Come June, the unstructured nature of summer — with no class and no basketball practice — also seemed rough on him, and the prospect of finding a summer job was grim, since the town had no jobs. There is a deeply fascinating documentary to be made, I’m sure, about the relationship between documentary filmmakers and their subjects. And one of the key facets would be the way that relationship changes once the shooting is done.

In the year that followed, I’m happy to say, Andrew and I were able to return to Medora plenty more times, and Dylan came to understand that although our presence in his life was less regular, the love we had for him remained. It was a magical feeling to be at his high school graduation in the spring of 2012 (filming, of course) and watch him walk down the aisle in his cap and gown. And it was in some way telling that at the end of the night, rather than rage with his friends at a high school party, Dylan came to find me and another one of our cameramen in a Pizza Hut parking lot, and we all just sipped Cokes, told stories, and laughed till three in the morning.

Now, 18 months later, the movie we made about Dylan, his teammates, and the tiny town of Medora opens today in New York and L.A.; next Tuesday it will play in 20 cities around the country and it’ll be released on iTunes and VOD. I can’t wait for people to get to know Dylan and his friends in some of the ways that I have. I find their ability to battle impossible odds and keep moving forward in the face of daunting challenges incredibly inspiring, and I think a lot of other people will, too.

This past week, as part of the film’s publicity circuit, Dylan and I met in New York City. It was his second time on an airplane and one of the few times he’d ever left his home state. The night he arrived, Dylan seemed to take it all in stride — the whirl of taxi cabs, ambulance sirens, and street vendors in front of his hotel near Times Square. His largest concern was finding a store to buy chewing tobacco. We wandered the East Village and talked through his plans for the future, which include college classes, if he can find a way to afford them, and a job as a social worker or an audio engineer. Early the next morning, we went on Fox & Friends and Dylan got a hug from Melissa Joan Hart, which he was excited to brag about to his mom.

In the afternoon, I took Dylan to the top of the Empire State Building. Finally, I’d found a way to amaze him. For a kid from a town of fewer than 500 people, looking out across the city was an almost incomprehensible marvel. I circled the observation deck, and when I returned, Dylan was still in the same place, an intense expression on his face, absorbed by the view and perhaps reflecting on the larger accidents of fate that had brought him to this unexpected perch. I took a picture of him with my cell phone and asked, “What do you think?”

“I’ll tell you what I think,” he said thoughtfully. “I think I’m glad we met.”