The Loser’s Advantage: Saban vs. Muschamp vs. the Playoff 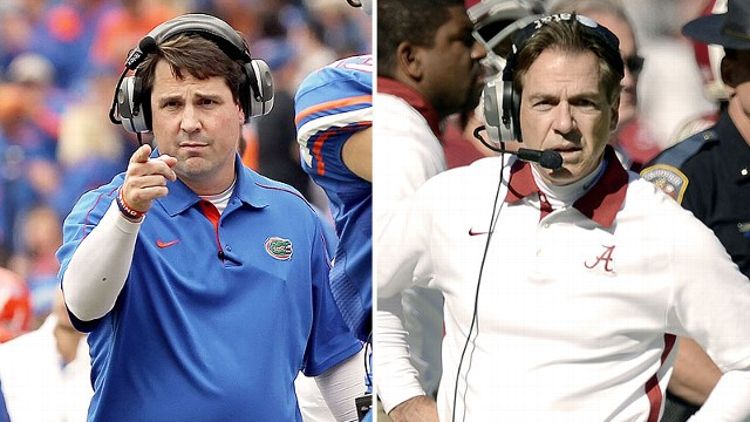 When Nick Saban and Will Muschamp get into a pissing match, there’s only one thing to do: Call Paul Finebaum and wait on hold. But in this case, we’ve got to do more, because Saban vs. Muschamp points out a sneaky flaw in the upcoming college football playoff. Call it the loser’s advantage.

Advantage, Dawgs, right? This year, that’s true. Bama-Georgia is a mini-playoff for a shot at Notre Dame. But what if this game were taking place in 2014, when we’ll have a four-team playoff? The Bama-Georgia winner would definitely snag a spot in the playoff. And Florida, at 11-1, would also snag one. But the Bama-Georgia loser would be eliminated. Meaning, by virtue of losing their division and skipping a tough 13th game, the Gators would get a leg up. That’s the loser’s advantage.

“It’s not really a great scenario,” Saban told reporters Sunday on a teleconference. “You play your way into the [SEC] championship game, which means you’re the best team in your division … It doesn’t seem quite right, but it is what it is. I don’t really know what me commenting about it is going to do to change it. But I don’t feel good about it.”

Muschamp fired back: “Well, I can switch and go to Atlanta if he doesn’t want to go to Atlanta and play the Dawgs. Be careful what you ask for, Nick.”

Remember, Saban and Muschamp are duking this out over much lower stakes. What irks Saban is that Florida is virtually guaranteed a BCS berth — a.k.a. the Sugar Bowl — while the Bama-Georgia loser is probably going to get sent down to the Capital One Bowl. Under the BCS system, Bama and Georgia will gladly take the risk for a shot at Notre Dame. In two years, with multiple championship playoff berths in play, the drop-off is much more severe.

The funny thing is, the loser’s advantage is already part of the BCS system. Last year, Michigan and Michigan State both finished 10-2 in the Big Ten Legends Division. State won the head-to-head, but lost the conference championship game to Wisconsin. So it was Michigan, perversely, that got to go to the Sugar Bowl, beat Virginia Tech, and be pronounced “back” in a way that State never was.

The playoff was constructed so that (allegedly, in theory) we’d throw out that stuff and pick the four best teams in the country, period. But here’s the problem: We’re still going to choose conferences champs through championship games. So basically, there will be two playoffs, which certain teams (Bama, Georgia) will have to survive and certain teams (Florida) will be able to skip. When we say we want to judge teams on their “entire body of work,” what if the body of work is of different lengths even for two teams in the same division?

You might say, OK, you have to win your conference — or at least your division — to make the playoff. But Florida, which did neither, actually has a terrific résumé. They beat LSU, Texas A&M, South Carolina, and Florida State. They played a much tougher schedule than Georgia inside and outside the SEC. (Georgia drew Ole Miss and Auburn as its SEC West opponents.) You could argue that if the SEC Championship Game didn’t exist — if we froze the season now and studied the résumés — then one logical outcome might be to put Notre Dame into a tourney with Bama, Georgia, and Florida.

Plus, if we make a conference/division title mandatory, then we’re starting to construct a new Rube Goldberg contraption like the dread BCS. And I wouldn’t want any of the nation’s leading sportswriters to be charged with intellectual inconsistency.

Here’s the part of the column where I’d like the answer to arrive with a bang, like the Gators’ game-changing, ball-jarring hit on E.J. Manuel did Saturday. Alas, I don’t have it. Feel free to suggest a fix in comments below. Meanwhile, I’ll be waiting on hold with Finebaum, praying for a resolution.