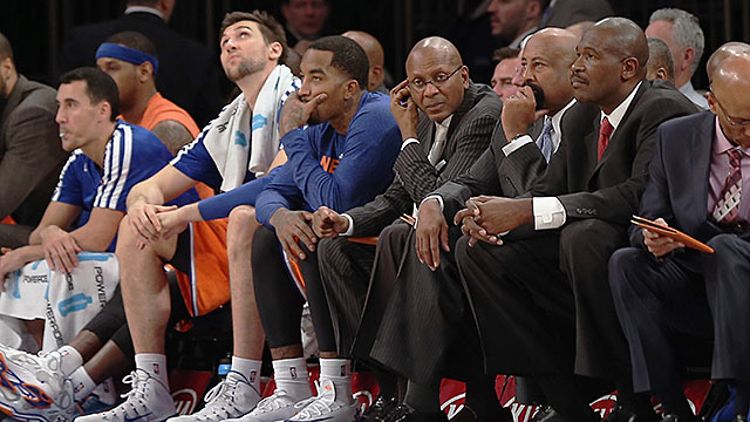 It was 34 degrees in New York City yesterday, but my son Sam and I decided to spend 45 minutes in the cold walking home up 9th Avenue instead of sitting in Madison Square Garden watching the second half of the Knicks/Celtics game.

I can’t offer Zach Lowe–like analysis of the statistical inequities between the teams. But I can try to bring you inside what it feels like to still care about a team that so obviously doesn’t care about us.

I remember being a kid at the Garden; it was my favorite place in the world. I’d make my dad get us there early, and I’d make us stay till the very end no matter what the score was. Because that’s what a fan did. But those teams of the ’70s and ’80s played hard, seemed to care when they lost, and seemed to notice that there were people in the stands who cared about the outcome of the game. Some of those Knicks teams weren’t very good. Some were bad. But none of them were disgraceful. This team is.

There’s something else I remember from being a kid at the Garden. Occasionally, some desperate-looking guy in his forties would start booing. I could not understand it. Could not understand how someone could get to a place of booing the home team. Root ’em on, I’d think. Let’s all put them on our shoulders. Let’s be the sixth man!

Yesterday, I was that desperate-looking guy. I started booing when the score was 10-0 and didn’t stop until I nearly stepped on the family of five sitting to our left as I stormed past them and went up the aisle and out to the street.

As Sam and I moved up the avenue toward our apartment, I was stewing. Why did I give a shit? Why did we give a shit? As is often remarked, in the end, I’m just rooting for laundry. But this laundry has mattered to me longer than anything else except the family I was born into. I am a Knicks fan. When they let Jeremy Lin go, I tried to switch my allegiance, writing about it here. But in the end, there was just no way I could root for the Nets (I do root for the Rockets, though, whenever I watch them play).

So I’m stuck. My son is stuck. All Knicks fans are stuck. And as much as we tell ourselves that in the scope of things it’s insignificant, it still hurts. Bad. Because we need the insignificant stuff. That’s the stuff we ride when the significant stuff is getting us down. We count on sports to be there for us, as we are there for it. And we can deal with losing — a game, a season, a few years.

But this has become untenable. It feels permanent, unchangeable, sickening. And there’s not a damn thing anyone but James Dolan’s father can do about it.

Sam and I got home, and I started warming up. I took off my jacket. Was calming down. But then I pictured James Dolan and Carmelo Anthony and Mike Woodson setting their jackets down when they got home. Even now, when I think about them throwing the loss off just as casually as their coats, I get riled up again.

I guess I have to accept it somehow. The Knicks suck. As it ever has been. As it ever will be. I can’t escape it. I can’t change it. I just have to live it.

College Football, Week 15: The Kingdom, the Power, and the Personal Pizza