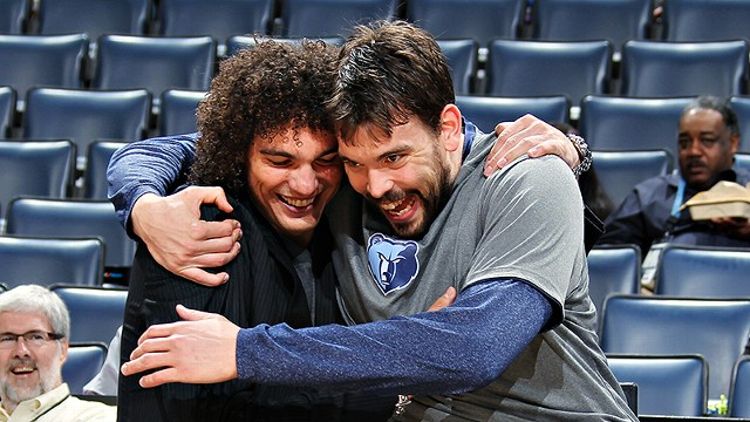 A few quick notes on the Grizzlies trading Marreese Speights, Wayne Ellington, Josh Selby, and a future first-round pick to Cleveland for Jon Leuer in a deal that is almost completely about Memphis going from $4.3 million over the luxury tax, to around $2 million under it:

• I was as guilty as anyone this morning in burying the lede on Twitter, in part because it makes sense to focus on the fringe title contender instead of the sad lottery team. So here’s the lede: This is a pretty great deal for Cleveland, and the greatness is in the details of the future first-round pick Memphis is sending. The Cavaliers had about $10.35 million in cap space before this trade, and they stood as one of just three teams (Phoenix and Houston being the others) with enough cap space to take on significant Memphis salary. Cleveland, of course, has to pay a prorated portion of those salaries, and that kind of spending has a price: the draft pick.

And per Chris Herrington of the Memphis Flyer and Ken Berger of CBS Sports, here’s how the draft pick works:

Basically: Memphis is betting on its ability to stay a playoff team over the next half-decade-plus. Cleveland is betting on Memphis falling into the lottery at some point in that span, and that’s not a terrible bet. Of Memphis’s current core, only Mike Conley is under contract beyond 2014-15. And though this trade relieves Memphis’s tax concerns for this season, it does nothing to relieve those same concerns for next season and 2014-15. Today’s deal means Rudy Gay will stay put for this season, barring Memphis getting an offer it cannot refuse; Zach Randolph was already effectively off the trade block before today, and Memphis can sign two or three minimum-salaried players and still duck the tax.

But they’re still looking at mammoth payrolls in each of the next two seasons, and today’s salary dump makes it clear the new ownership group would prefer to avoid the tax. That means Memphis will continue to explore cost-cutting deals, probably revolving around Gay, starting this summer and going forward. Such a deal, combined with Randolph’s age (he’ll turn 32 in July) and the lack of talent coming via the draft, makes it easy to see a scenario in which Memphis falls off more than expected in 2015 or 2016.

It’s not a can’t-miss bet, obviously. The pick Cleveland got here is actually a lesser version of the one Toronto sent to Houston in the Kyle Lowry deal, a pick that now belongs to Oklahoma City. That pick also has protections on either end to ensure the Rockets (now Thunder) get a very good first-round pick, but those protections are more favorable to the Thunder than the ones that apply to Cleveland’s new pick. The Thunder can get Toronto’s pick if it’s no. 4 this season, no. 3 the next two seasons season, and all the way to no. 2 after that.

(The Rockets actually would have made sense as Memphis’s partner in this exact Speights-centric deal, since they have enough cap room to act as Cleveland did here. Perhaps Houston pushed for a pick on the Lowry level, or was simply afraid Speights would pick up his $4.5 million player option for next season — mucking up Houston’s max-level cap space. The Cavs are more concerned with subsequent summers, when LeBron James, Kevin Love, and others hit free agency, and they have very little record of attracting free agents regardless).

But this is a bet worth making for Cleveland, especially after missing out on similar opportunities to rent its cap space last summer. Cleveland drove a very hard bargain on such deals, sometimes demanding multiple first-round picks from teams, including the Wolves, searching for a salary dump, according to several league sources. They’ve softened here, and they’ve gotten a nice asset.

• Cleveland now has four extra first-round picks set to arrive sometime in the next few years, plus the right to swap picks with the Lakers this June — a nice little benefit that will vanish if the Lakers miss the playoffs, in which case L.A. sends its pick to Phoenix. The Cavs also have all their own picks, at least one of which (this year’s) will be a very high lottery pick. They’ve made themselves a more interesting potential trade partner today. That Lowry pick was the key swing factor in Houston nabbing James Harden, and while today’s pick isn’t quite on that level, it’s still much better than the bottom-rung picks Cleveland has coming from Miami (via the LeBron sign-and-trade) and the more heavily protected pick they’ll get at some point from the Kings.

• If anything, this hurts Cleveland’s tanking chances. The Cavs are 10-32, ahead of only the 9-30 Wiz in the “race” for the most ping-pong balls. Sacramento, Phoenix, and New Orleans stand a few games above Cleveland, and both the Hornets and Wizards have been playing very solid ball over the last two weeks (and longer in the Hornets’ case). Charlotte (10-31) might be the odds-on favorite in this “race,” but Cleveland, lacking depth at basically every position — but especially the front line — has/had a real chance. Speights will step in as the second-best big man on the active roster, behind only Tristan Thompson. Speights had the right to veto any deal, and it’s possible the huge opening for playing time in Cleveland — as opposed to the heavier competition in Houston or Phoenix, or any other team looking for a pick — was the deciding factor in Speights’ agreeing to the deal.

• A lot of first-round picks that change hands work so that the team sending the pick doesn’t have to actually send it if it’s high in the draft (lottery protected, or top-10 protected), with another rule that if the pick isn’t sent after a few years, the team can just send a second-rounder instead. Cleveland got a much better pick than that today.

• As for the Grizz, we have to see how they fill those minimum-salaried slots; there are already reports (via Chris Vernon in Memphis) that they are pursuing various perimeter types both here and in Europe, including Sasha Vujacic; Chris Johnson of Dayton; Joe Ingles, a wing with handles from Australia; Bill Walker; and, most intriguing of all, Delonte West.

Let’s not mince words: Memphis needs outside shooting. Ellington was far from a game-changing long-range ace; he’s hit 41 3-pointers this season, but 13 of those came in two games combined. But he’s at least a player defenses need to respect on the perimeter, and Memphis needs that sort of player, even if he lacks a Ray Allen–type quick release or any ability to launch off the bounce. Shane Battier and O.J. Mayo weren’t exactly Ray Allen and Ryan Anderson for the 2010-11 Grizzlies, but Memphis’s offense could breathe a bit when they had two off-ball shooters out there at the same time — two guys who could catch-and-shoot, and were active (especially in Mayo’s case) moving around the floor.

Ellington could at least do that. The Grizzlies have tried recently to replicate the Ellington effect, plus add a dash of ball handling, by playing Jerryd Bayless and Mike Conley together. But Bayless is shooting 37 percent and has been a below-average 3-point shooter his entire career, with the exception of one season (last year) that looks more and more like an outlier. He’s also turning over the ball at alarming rates. And the Bayless-Conley duo will bring defensive challenges against bigger teams.

Quincy Pondexter will help when he comes back from a sprained knee ligament, but his return date and ability to rediscover his peak form are uncertain. Pondexter has worked his tail off to develop a very nice corner 3 (47.8 percent from the corners this season, per NBA.com), and he has played heavy minutes at shooting guard in place of Tony Allen with the rest of Memphis’s starters. Quick opposing 2-guards can give Pondexter issues when Memphis is on defense, but the Grizzlies should be good enough to cover for him.

Still: They could use some shooting depth, and each of these guys would help. Finding someone with a handle — West or Ingles — could also give them some “Bayless poops the bed” insurance.

• Look for the Grizz to sign another big man. Speights played his role well in Memphis, but he was losing minutes to Darrell Arthur and had sunk to no. 4 on the Grizz big-man depth chart. Hamed Haddadi rises to that spot now, and let’s just say the Grizz aren’t comfortable with Haddadi there. It’s true that most elite playoff teams lean on a big-man rotation of only three players, but Arthur has just barely gotten healthy again, he’s nowhere near Speights’s level as a rebounder, he barely gets to the line, and foul trouble and/or injuries will pop up for any team wishing to play four playoffs series in the spring. The Grizz need another body.

• Ultimately, this hurts for the Grizz, but if they absolutely had to duck the tax — and it certainly looks that way — they could have done worse than forfeiting an uncertain first-round pick and finding equivalent perimeter talent via open roster spots. But if that pick turns Cleveland’s way, the price will have been heavy.