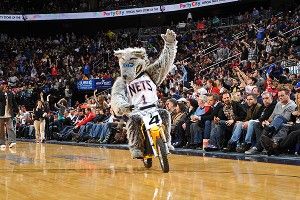 Living and dying with the New Jersey Nets in 2012 is like riding hard for a pet goldfish — it’s not gonna be around very long, and it’ll never amount to much, so why bother? On Sunday, I went to the Prudential Center in Newark to find out.

“Last year, the Nets are playing the Celtics, and our arch-enemy Paul Pierce comes to the line,” says Mr. Whammy, 76, from his regular seat behind the visitors’ basket on the floor at the Pru. It’s just before tip-off in one of the last games the Nets will ever play in Jersey.

Whammy’s real name is Bruce Reznick. He’s wearing glasses the size of side-view mirrors and a red Nets jersey that hangs to the middle of his thighs. “Pierce comes to the line,” continues Whammy, “and I start yelling, ‘I’m gonna put the whammy on you, 34! Whaaammy on you, 34! And Pierce, he says to me, ’34? What’s my name? You know my name!'” Whammy chomps a chocolate chip cookie. “And Pierce misses the free throw! The whammy worked!” Then what? “Pierce makes his next 11. It’s the Nets. Whaddya expect?”

Only 11,341 people have shown up to watch the Nets and Cavs. Kyrie Irving is on the bench with an injury. Gerald Wallace gets hurt on a put-back dunk and hobbles off early. Deron Williams rouses himself for maybe seven total minutes of non-passive basketball. The crowd stirs for the first time midway through the first quarter when the JumboTron shows a gray-haired dude in sunglasses and a red fireball dress shirt doing Jagger-schoolmarm dance moves.

“It’s been a bittersweet year,” says the dancer, Phil Tozzi. “I’ve had season tickets for more than 10 years. The cost is going up 300 percent for Brooklyn. I’d be paying more for tickets than I do for my mortgage, so I don’t know what’s gonna happen. But I love coming here. I love dancing.”

A decade ago, Tozzi cracked his skull playing baseball. It was touch-and-go for a while. When he pulled through, he decided he’d dance whenever the mood struck. It strikes a lot. “I gotta be honest with you, though, it’s never been a loud building,” admits Tozzi, 61, while his teenage daughter checks her texts. “People’ve been coming the last two years knowing the team is gone. How invested are they all gonna be?”

With the Nets leading, I wander over to the Ice Lounge bar. Three 30-ish women are sitting together. I tap one on the shoulder.

“I’m a pregame drinking fan,” she says, then sucks Patron and pineapple juice through a straw.

The woman, in turn, swivels to face her friends.

“We got a good deal for tickets on Groupon,” she snaps over her shoulder.

I leave the bar and walk the concourse. There’s one person on the smoker’s balcony. He’s a wiry, leathery guy with sunken cheeks, a red Nets baseball cap, and sunglasses. A cigarette dangles from his lips while he counts out a wad of dollar bills.

Back inside, a Charles Dutton doppelganger in a Trail Blazers warm-up jacket is eating a hot dog, watching the game from the top of the first level. This is Steve, and he works on the ramp at Newark International. “I been coming to Nets games for 35 years,” Steve says, “and for 35 years they ain’t been filling seats. So how you gonna be disappointed that they finally moving? Only thing I’m mad about is them raising ticket prices for next year when the team ain’t never won. Sell me a good product. Don’t sell me the same thing and charge me triple.”

Halftime comes with the Nets up 56-48. By a souvenir stand, a group of kids have clustered around Mini-Sly, the Nets’ fox-dwarf mascot. I lean down and show him my press credential. He shakes his head no.

“It’ll be a softball,” I say, and Mini-Sly nods OK. “Are you moving with the team to Brooklyn?”
With Andy Serkis–like levels of anthropomorphic pathos, Mini Sly lowers his head and shrugs.

The Nets are up by 15 in the third quarter. I scan the top of the arena and see a dude sitting alone in the nosebleeds. I feel lonely just looking at him.

I am coming, solitary man in Section 233!

By the time I get up there, the Cavs have closed the gap. “It’s the Nets. This is what always happens,” says the loner, Jay, a 25-year-old student in Rutgers’ MBA program. He’s a burly 6-foot-5 or so, and sits with his legs draped over the seat in front of him. He lives five minutes from the arena, and paid 300-and-something dollars for his season tickets, even though, he explains, they go for 50 cents a game on StubHub.

“Tonight’s quiet because there are no famous players,” he says. “When the Knicks or Lakers come, that’s when people get into it.”

The game is still tight at start of the fourth quarter. Jay absentmindedly tears at the plastic lid of his soft drink cup, never cheering or groaning. He tells me about his internship, where he helps with the marketing of light bulbs. He’s worried he won’t be able to find a job when he finishes school in May. Next season, he says, “I’ll probably go to 76ers games. Philly’s close, and it’s cheaper than New York.”

Jay reminds me of my brother, so I stay and watch the end of the game. The Nets outlast the Cavs in overtime, 122-117.

There are worse ways to spend an evening. And Philly’s not that far away.

Break Up the Dodgers' (Schedule)