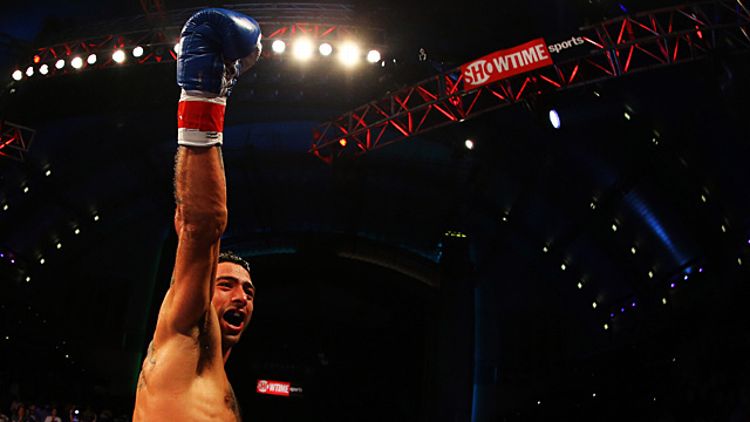 Traditionally, there has been no place for long-term thinking in boxing. If fighters permitted themselves much contemplation of the lasting effects of what they do for a living, few would become fighters in the first place. The same goes for fans, who either block out images of their punch-drunk former heroes or rationalize them by asserting that these old pugs might have been dead or in jail much sooner if not for boxing. On the business side of the sport, the short-term mentality is equally pronounced. Promoters and networks have spent the past three or four decades “enhancing” fights with alphabet-soup championship belts, and in the process they’ve cheapened all titles. And the pay-per-view model, television’s ultimate get-rich-quick scheme, has steadily separated boxing from its cost-conscious fans. Sure, charging $75 for a fight helps make Floyd Mayweather the highest-earning athlete in the world, but it also denies potential fans access to the sport.

In light of all of this, yesterday’s announcement that Lucas Matthysse and Danny Garcia will fight for the junior welterweight championship of the world on September 14 is probably the most un-boxing-like thing boxing has done since HBO and Showtime partnered to make the Lennox Lewis–Mike Tyson fight more than a decade ago. It’s not just that a major, obvious, must-see fight was signed (although, given what didn’t happen with Mayweather and Manny Pacquiao, that does qualify as an accomplishment). It’s that the September 14 date was already home to the biggest fight in six years, Mayweather vs. Saul “Canelo” Alvarez. And Matthysse-Garcia isn’t competing with it. It’s supporting it. It’s appearing on the pay-per-view undercard.

The most intelligent thing boxing’s power brokers can do is study past business models and do the opposite. Golden Boy Promotions and Showtime have done that here. They’ve put aside conventional wisdom in favor of actual wisdom. They’ve negotiated a deal with long-term financial upside and short-term sporting upside. This probably wasn’t their primary motivation, but they’ve — gulp — put the fan first.

The party line has always been that undercard fights don’t affect pay-per-view sales, and while that sounds like a convenient excuse for promoters when three of their undercard bouts deliver five rounds of one-sided action, there’s probably a lot of truth to it. When Golden Boy tried to give the 2010 rematch between Juan Manuel Marquez and Juan Diaz a deep undercard, it generated a ho-hum 150,000-200,000 estimated PPV buys. Despite an excellent cofeatured bout between Antonio DeMarco and Jorge Linares, the 2011 Bernard Hopkins–Chad Dawson PPV drew a disastrous 40,000 buys, according to unofficial reports (which are all we have to go on when a PPV tanks). Sure, it’s possible that Canelo Alvarez vs. Shane Mosley helped Mayweather’s fight with Miguel Cotto reach 1.5 million buys last year, but without exit polling, all we can do is speculate. Looking at the undercards for the rest of the biggest sellers in PPV history, however, the most educated guess would be that the main event is all that matters.

In the case of Mayweather-Canelo, before the undercard was announced, predictions generally ranged from a little more than 1.5 million buys (which would make it the biggest seller since all-time record holder Mayweather vs. Oscar De La Hoya in 2007) to a little over 2 million buys (making it second all-time to Mayweather–De La Hoya). With the addition of Matthysse-Garcia, those predictions haven’t changed much. Almost all the hardcore boxing fans who’ve been salivating over this throw-down between the two best 140-pounders in the world were going to buy Mayweather-Alvarez anyway. Neither Matthysse, an Argentine, nor Garcia, a Philly fighter of Puerto Rican heritage, has built a rabid nationalistic or localized fan base. I live in the Philadelphia area. I drive past billboards on I-95 with Garcia’s face on them, and every time I wonder whether anyone else driving past has a clue who he is.

But that plays directly into the genius (Mensa status!) of staging this particular fight underneath this particular main event. It offers tremendous exposure for the underexposed Matthysse and Garcia, with far more eyeballs watching than would be the case if it were a standard Showtime headliner. Cotto vs. Austin Trout holds the network record with 1.4 million households tuning in live, and not only is the Mayweather-Canelo card almost certain to exceed that number, but HBO’s data suggests that the average household ordering a PPV contains at least five viewers. So it’s not unreasonable to think that, by airing immediately before Mayweather-Alvarez, Matthysse-Garcia could be seen by more than 10 million Americans.

And that exposure will prove vital when the Matthysse-Garcia winner finds himself next in line to face Mayweather, assuming the money on “Money” is of the smart variety and the chalk talks in the Alvarez fight. When Mayweather signed his six-fight deal with Showtime back in February, it was widely wondered what six worthy opponents were out there for him. The first fight, against Robert Guerrero, was not a box office hit (Showtime still hasn’t released PPV numbers more than two months later, which suggests the rumors of a disappointing 830,000 buys might have some validity). So whereas Mayweather-Alvarez originally was thought of as a prime candidate to be the sixth fight of the deal, it got hurried into the two spot, perhaps because a financial bonanza became more of a need than a want. If Alvarez wins, well, we all know what the third fight of Mayweather’s contract will be. But if Floyd prevails and does so comfortably, he’ll need to find four more opponents after dispatching the one some consider his greatest threat at 154 pounds or below. Should either Matthysse or Garcia impressively erase the other minutes before Mayweather and Alvarez get into the ring, wouldn’t that go a long way in driving public interest in Mayweather vs. that winner?

An undercard fight like Matthysse vs. Garcia also provides long-term benefit by leaving PPV customers satisfied, and you don’t need a marketing degree to recognize the ongoing value of satisfied customers. The bout has Fight of the Year potential and Knockout of the Year potential. Plus there’s almost no chance of it becoming a defensive dud. Matthysse-Garcia offers insurance in case Mayweather-Alvarez is a stinker, which is not exactly unheard of for Mayweather fights.

Another benefit is that Golden Boy and Showtime now get to hype this event as one of the best pay-per-view cards ever assembled, and it has the rare distinction of showcasing two true championship fights. According to the Transnational Boxing Rankings Board, Alvarez and Mayweather are nos. 1 and 2 at junior middleweight, and Matthysse and Garcia hold the same distinction at junior welter. There’s no shady maneuvering needed to position these as fights to fill vacant championships. We’re seeing the best and most deserving against the best and most deserving, without dispute. In two back-to-back fights.

Boxing will never entirely rid itself of its foul stench, especially when one of its supposed next big things, Adrien Broner, is out there videotaping himself on the toilet. In the case of Matthysse-Garcia, though, the sport — and particularly the business behind it — is smelling unrecognizably sweet. I mean, one boxing writer compared the fight to Randy Savage vs. Ricky Steamboat; is there any higher praise for an undercard bout?

On a media call yesterday that was loaded with the usual platitudes and promoter-speak, one line was worth repeating: Golden Boy CEO Richard Schaefer said, “The Butterbean days are over.” This was both a dig at rival Bob Arum and Top Rank, which for several years littered De La Hoya undercards with the likes of the larruping legume, and a pat on his own back for deviating from boxing’s standard operating procedure. In this case, the self-congratulation was well-earned. Financially, the addition of Matthysse-Garcia to the Mayweather-Alvarez card is probably in the neighborhood of a break-even proposition, given that both undercard fighters are collecting seven-figure paydays. But the real story here is the future rewards — and the fact that somebody in boxing is actually stopping to think about them.