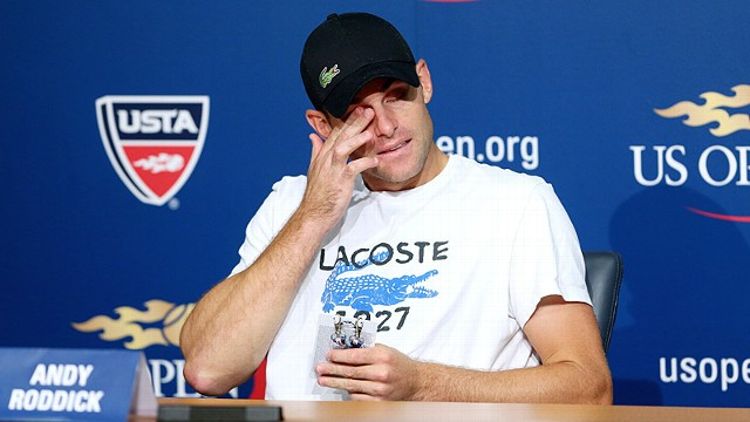 In one of my very favorite Real World seasons, London in 1995, there was a cast member named Jay who was totally boring — his routine consisted of staying up late to watch TV every night and then napping on the couch for most of the day. In other words, he was the realest reality character that I’ve ever seen. When I idly daydreamed about being on Real World, I figured I’d be just like Jay: lazy, content to lounge around in a ridiculous house, and sure to feign sleep anytime drama unfolded.

I feel much the same way about Andy Roddick. It’s not that he’s lazy or boring or was ever on Real World, and it’s certainly not that he avoids confrontation. It’s more so that, within the artificially constructed environment that is professional tennis, he has long been as real as it gets.

He was never a cyborg assassin sans sweat glands like Roger Federer, but neither — despite what his biggest critics might allege — did he possess the thoroughly unhinged mad genius of a Jimmy Connors. (I’m pretty sure Roddick never screamed “YOU’RE AN ABORTION!!!!” to a chair umpire, although I could be wrong.)

And yet Roddick was also never one to remain particularly cool-headed or even-keeled. He wore his heart on his sleeve — and given the billowing shirts he preferred, it was always easy to see.

It was the fourth round of the 2011 Indian Wells tournament, and Roddick was pissed. After losing the first set to Richard Gasquet amid what he felt to be some questionable calls, Roddick was broken early in the second. He threw his racket in anger. Fergus Murphy, a chair umpire with whom Roddick has had a number of run-ins through the years, leaned into the mic.

“I’m giving YOU a warning,” Roddick shot back. “For incompetent officiating.”

The whole scene was like the illegitimate hate-child of “YOU’RE out of order! This whole TRIAL is out of order!” and “Well your brain has the … SHELL on it.” It was also classic Roddick: petulant, hotheaded, scandalous in the minds of a great number of genteel tennis fans, probably inappropriate — but also, let’s be honest here, pretty hilarious, too. I even found it relatable: Who among us hasn’t muttered, out of exhaustion or frustration, something equally churlish? In a way, we are all Andy Roddick. (Sorry, Brooklyn Decker sold separately.)

In a sport as library-quiet as tennis, the reverberations of Roddick’s on-court antics have always been loud. But it’s his notorious postgame press conferences that have sometimes been amplified even more.

Roddick frequently answers questions with questions; he smirks and interrupts and rolls his eyes. (All of this, truth be told, makes me laugh.) You genuinely never know what you’ll get. After he got knocked out of a tournament in Beijing in the first round and a reporter asked him if thoughts of retirement might be creeping in, he said, “I think YOU should retire” (are we sensing a theme here?) and then left the podium. Yesterday, when a reporter asked a strange question about refusing to sign a girl’s chest at a 1997 (!) tournament in Delray Beach, he said, “I had just never seen a boob before, to be honest.”

But he’s also, in his way, a pretty damn good media critic. (If he chooses not to go into tennis broadcasting — a profession that he dismissed at last year’s U.S. Open as “the easiest in the world” and something that “just doesn’t take much thought” — he’d make a killer ombudsman.) Just as truth is an absolute defense against libel, it’s also, in my mind, one of the main things that makes Roddick more compelling than repellent. He gets worked up over the same rote questions as you or I might; he decries the same hype cycle that we’re all always making fun of on Twitter. He’s obnoxious, but he’s generally not wrong.

“I’d love to hate you, but you’re really nice,” he said he told Roger Federer after losing to him in straight sets in the 2005 Wimbledon final. (Roddick wasn’t always nice, and there were times when I hated to love him, though I did anyway.) After getting smoked by Novak Djokovic at the London Olympics, he said: “If I win a match, it’s like career appreciation day. Then if I lose one, it’s like we should take him out in the field and shoot him in the head.” When someone wondered yesterday, after his final match, who he thought would be filling his shoes in the future, he shut down the question: “There is no filling shoes. I think we’ve got to be looking for individuals, not clones.”

And asked yesterday about what he was doing to help mentor and prepare the younger generation of players, many of whom are around the age he was when he won his lone Grand Slam title in 2003, he basically shrugged.

“I don’t know,” he said. “You’d have to ask them. I always tried to be a dude around the guys. You just try to be a human. I don’t know. That’s what you should do.”