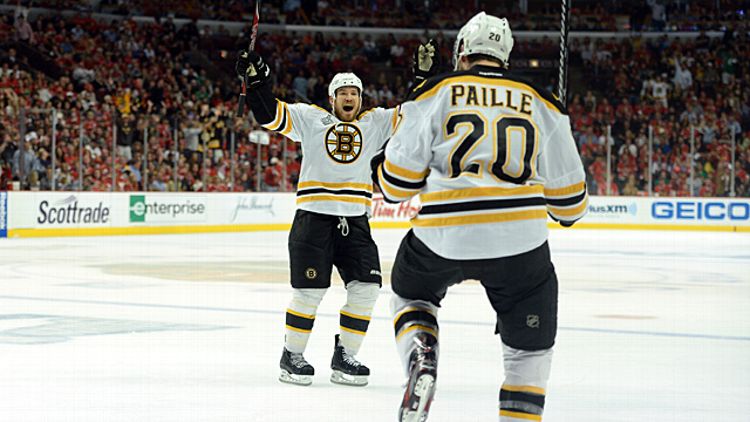 After the opening two games between the Chicago Blackhawks and Boston Bruins, the Stanley Cup final is tied at one game apiece for the first time since the lockout.

Well, not this year’s lockout. I mean, that would be true, but it wouldn’t be very interesting. And because we need to be more specific in Gary Bettman’s wonderful world of perpetual work stoppages, let’s try this again: This year’s final is tied 1-1 for the first time since the lockout that wiped out the entire 2004-05 season. Much better.

Yes, in all seven Stanley Cup final series since 2004, the team that won the first game also won the second. (Although two of those teams still ended up losing the series.) Given that, I thought it would be worthwhile to look back at the most recent 10 times that we’ve found ourselves even after two games, and to see if the past has anything to teach us about what we might be able to expect this year. 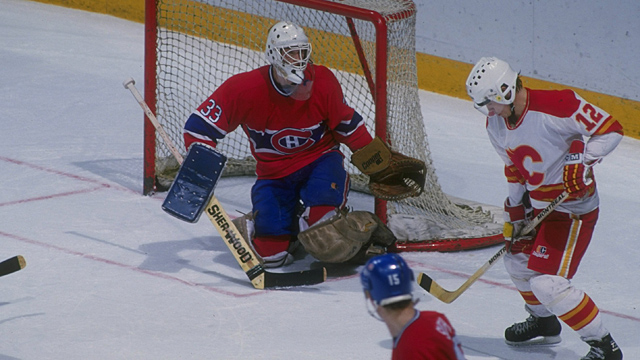 The first two games: Calgary rolled to a 5-2 win in Game 1 and had a chance to take a 2-0 series lead when Game 2 went into overtime. Instead, it took Montreal’s Brian Skrudland just nine seconds to tie the series.

What happened next: Montreal swept the remaining games, winning the series in five behind the goaltending of an unheralded rookie named Patrick Roy.

What we can learn: That getting an overtime done with early won’t kill you, for one thing. Beyond that, the Flames shared more than a few similarities with this year’s Hawks: both held home ice, both won Game 1, and both missed a chance to take a 2-0 series lead with an overtime loss in Game 2. The Flames didn’t win another game after that lost opportunity, which would make Bruins fans happy if it were possible for a Montreal Canadiens Cup win to do that. (Spoiler alert: It’s not.) 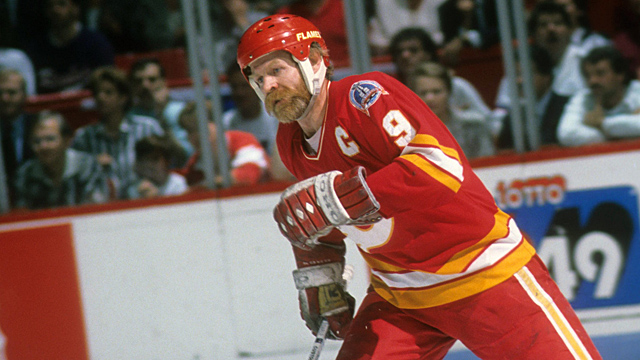 What happened next: The Canadiens took a 2-1 series lead with a double-OT win in Game 3. But the Flames won the next three, including a Game 6 win that saw them become the first visiting team in more than 60 years to win the Cup at the Montreal Forum.

To remember not to go overboard on the impact of tonight’s Game 3, as tempting as that will be given how important it’s been over the years. 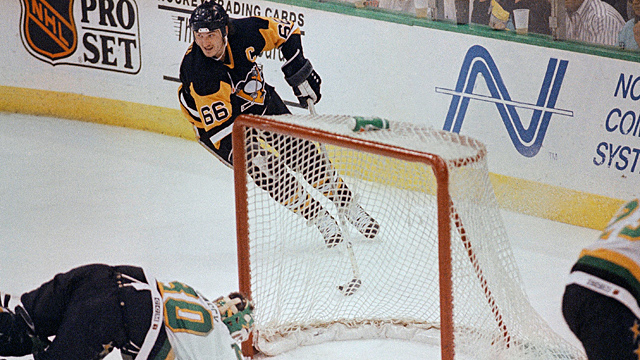 The first two games: The North Stars, who might have been the greatest underdog story in final history, stole Game 1 with a 5-4 win in Pittsburgh. The Penguins rebounded with a 4-1 win in Game 2.

What happened next: The North Stars won Game 3 by a 3-1 final to reclaim the series lead, before Mario Lemieux and the Penguins offense took over. Pittsburgh won the next three games, scoring 19 goals in the process and capturing their first Stanley Cup in six games.

What we can learn: The “scrappy underdog” story line doesn’t apply to either of the Final teams this year. But the “offensive powerhouse that finally wakes up” one could, and that would be good for a Chicago team that was second in league scoring during the regular season but has managed just five goals against Tuukka Rask in 180 minutes. 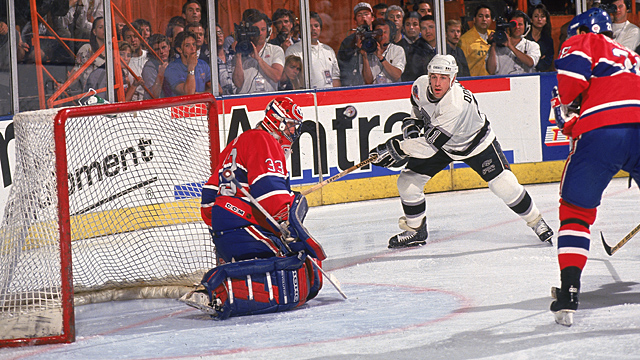 The first two games: The Kings took Game 1 in Montreal and were well on their way to another win in Game 2 before one of the most infamous moments in final history. Trailing 2-1 late in the third, Canadiens coach Jacques Demers called for a stick measurement on Marty McSorley. The stick was illegal. The Habs scored on the power play and then won in overtime.

What happened next: The McSorley stick was the turning point, as the Canadiens won Games 3 and 4 in L.A. (both in overtime) before clinching the Cup on home ice in Game 5.

What we can learn: Mistakes by a tough guy that lead to an OT loss in Game 2 can be hard to recover from. That could be bad news for the Hawks, after Brandon Bollig’s failed clearing attempt created the opportunity for the Bruins’ winning goal Saturday night. Maybe he needed a bigger curve on his stick. 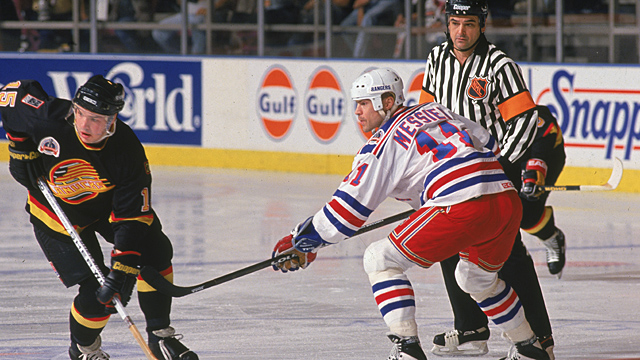 The first two games: The underdog Canucks took Game 1 in overtime before the Rangers rebounded with a 3-1 win in Game 2.

What happened next: The Rangers outscored the Canucks by a 9-3 total in winning both games in Vancouver (including Pavel Bure’s failed penalty shot against Mike Richter in Game 4) and seemed set to wrap up the Cup on home ice in Game 5. But the Canucks spoiled the party with a 6-3 win then took a 4-1 decision in Game 6 to force a seventh game. The Rangers held on to win 3-2 in a classic, ending their 54-year Cup drought.

What we can learn: The major lesson from 1994 was “don’t oversell the importance of momentum, especially after a blowout.” It’s hard to imagine that coming into play in this Bruins and Blackhawks series — with two teams that seem like a dead-even matchup — so we may have to default to “just because you lead your team to a Cup, don’t expect them to hire you as head coach two decades later.” 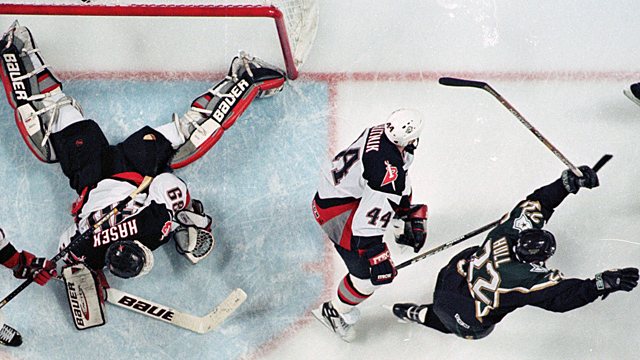 The first two games: Buffalo stole Game 1 on the road on an overtime goal from noted sniper Jason Woolley. Dallas scored a pair of late goals in Game 2 to earn a split (and break a streak of four straight years in which the final ended in a sweep).

What happened next: The two teams went into shutdown mode over the rest of the series, with none of the remaining games featuring more than three total goals. They split Games 3 and 4, each by a 2-1 final, before the Stars earned a shutout win at home in Game 5. That set up Game 6 in Buffalo, which went into triple OT and ended on the infamous Brett Hull “skate in the crease” goal.

What we can learn: I’d make a joke about the importance of making sure the guys in the replay booth are awake during overtime when the Cup is on the line, but I’m pretty sure the Blackhawks already know about that one. 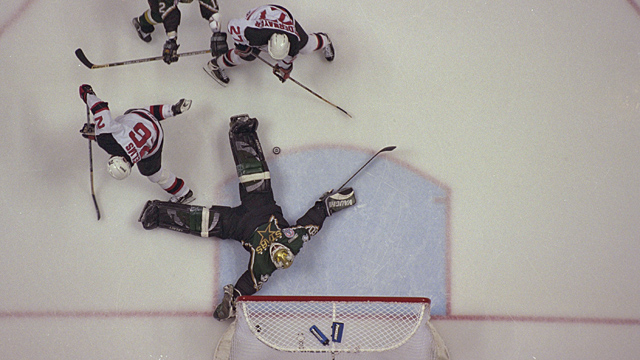 The first two games: Game 1 was a 7-3 Devils blowout, before the league sent a memo reminding everyone that this was the Dead Puck Era and to stop being so entertaining. The Stars evened the series with a 2-1 win in Game 2.

What happened next: The Devils won Games 3 and 4 on the road before heading back to New Jersey with a chance to win the Cup in front of their home fans. Instead, they dropped a 1-0 contest in triple overtime that was exactly as exciting as it sounds (i.e., not remotely exciting). That sent the teams back to Dallas for Game 6 and another multi-OT contest, this one won by the Devils on Jason Arnott’s Cup-clinching goal in double overtime.

What we can learn: The 2000 final was the first since 1977 to feature two teams who’d each won the Cup within the past five years (it would happen again in 2001). The Bruins and Blackhawks have each won in the past three, which hasn’t happened since 1976. That’s an interesting bit of trivia, but it probably doesn’t tell us much beyond that these are two very good teams. If you didn’t already know that, it’s either your first day as a hockey fan and/or you are the sportswriter who gave Nazem Kadri a Selke vote. 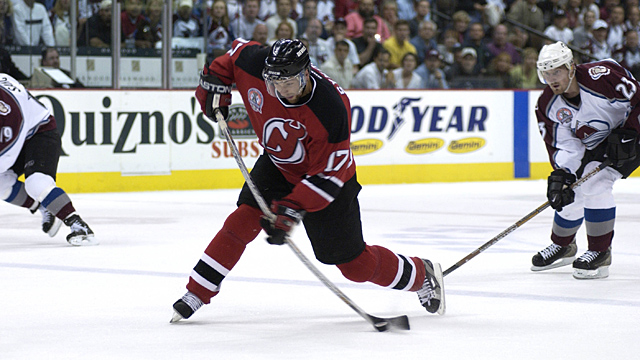 The first two games: The Avalanche rolled to an easy 5-0 win at home in Game 1 before dropping a 2-1 decision in the second game. That would mark the lowest-scoring game in a series that was notable for featuring arguably the greatest goaltending matchup in final history, Martin Brodeur vs. Patrick Roy.

What happened next: The teams split the next two games in New Jersey before the Devils won Game 5 on the road. But the Avs came back, thanks to a Patrick Roy shutout in Game 6 followed by a 3-1 win in the seventh and deciding game.

What we can learn: Since this was the Ray Bourque year, to never underestimate the inspirational power of the old man trying to win his first Stanley Cup. As we’ve already covered, each of these teams have guys who could fit that description. 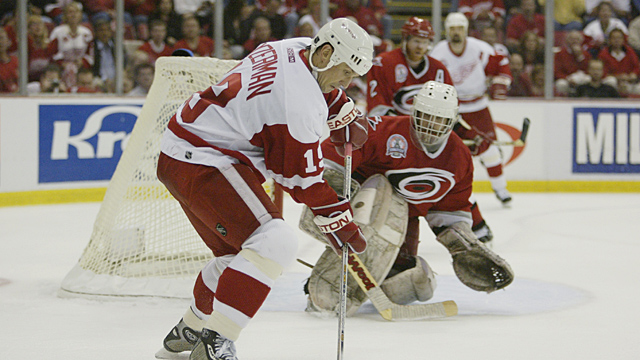 The first two games: The heavily favored Wings dropped Game 1 at home in overtime before rebounding with a pair of late goals in Game 2 to tie the series.

What happened next: Game 3 was the most memorable of the series, a triple-overtime thriller that ended on a goal by Detroit’s Igor Larionov in the 54th minute of sudden death. The Wings never looked back, allowing only one more goal over the next two games to take the series in five.

What we can learn: “When in doubt, go with the heavy favorite”? There isn’t one. “Bet on the Original Six team”? Nope, that doesn’t work either. “The team that wins in triple OT won’t lose again”? You know what, I’m out of ideas. Let’s skip this one. 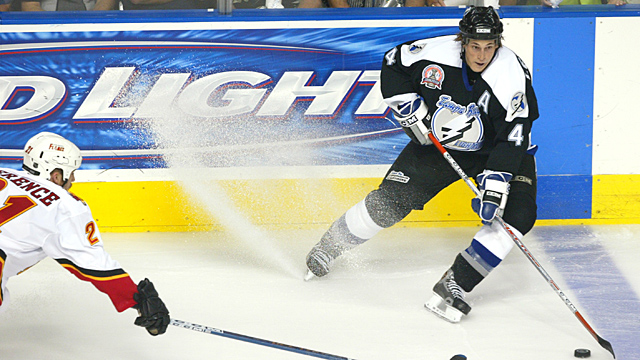 The first two games: The teams split a pair of 4-1 decisions in Tampa Bay, with the Flames taking Game 1 and the Lightning winning Game 2.

What happened next: The teams traded shutout wins in Games 3 and 4, then went to overtime for the first time in Game 5. The Flames won that contest to return to Calgary with a chance to win the Cup on home ice, but lost a controversial Game 6 when an apparent Martin Gelinas goal wasn’t counted. The Lightning ended up taking that game in double overtime, before returning to Tampa Bay and winning Game 7 by a 2-1 final to capture the Cup.

What we can learn: Not to take any of this for granted. The Lightning and Flames played a classic final, but between them they’ve made it out of the first round only once since 2004. It’s hard to imagine either the Bruins or the Blackhawks falling out of contention like that. Then again, strange things happen in the NHL. We should probably enjoy tonight’s game while we can. It may be nine years and two lockouts before we see one like it again.