Text Messages to the New Orleans Pelican: Your Beak Looks Like It’s for Delivering Death 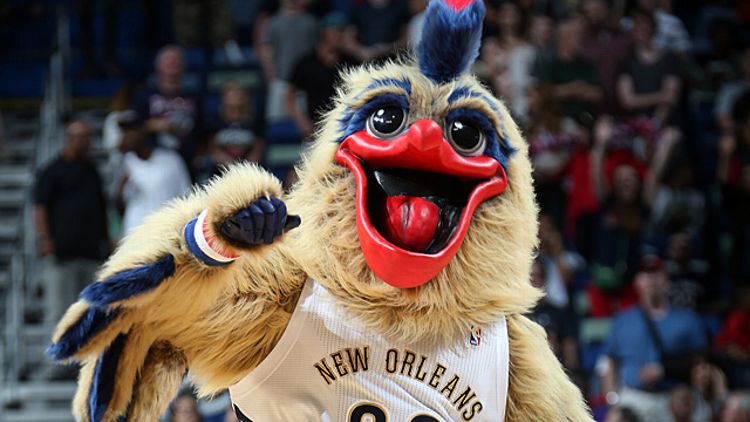 The New Orleans Pelican is a [something] with a cell phone so I sent [him/her/it] some text messages.

Me: Um, hey. It’s Shea. From Houston.
Pelican: Oh hi
Me: So let’s just get out in front of this: This is weird for me.
Pelican: How’s that?
Me: texting a pelican. I’ve never done it before.
Pelican: It’s cool. I’ve never texted a Houston Shea before.
Me: Oh. Well, I mean, I’m just Shea. I’m not, like, I’m not the Houston Shea.
Pelican: huh?
Me: I live in Houston. I don’t represent Houston. I’m just a dude. Like, you’re the New Orleans mascot. You represent the team. But I’m just a dude.
Pelican: Ah. I get it. OK. I thought you were a mascot too.
Me: Nope. Just a regular dude.
Pelican: I’m not regular?
Me: I mean, no
Pelican: Why?
Me: Um, well because you’re a giant fucking pelican for one.
Pelican: Oh, right. Yeah, I get that.
Me: People are pretty terrified of you, bro.
Pelican: :/
Me: Yeah, man
Pelican: but why??? I’m the New Orleans Pelican, not the New Orleans Penitentiary Pelican.
Me: oh I don’t know maybe it’s because you look like if pelicans suddenly started eating people, is why
Pelican: really? dang.
Me: yes
Pelican: how’s that? Is it the beak?
Me: yeah, it might be the beak. It’s very murder-y. why did they have to make it so bloodred?
Pelican: idk. I told them not to. What about my blue eyebrows?
Me: nah, man. I didn’t even notice those. I never got past your mouth.
Pelican: OK
Me: I know the Louisiana state bird is a pelican. I looked it up.
Pelican: He is. I’m very proud.
Me: He’s not near as awful-faced as you though.
Pelican: :(
Me: His beak is brown. Like a normal thing.
Pelican: I know.
Me: His beak looks like it’s for catching fish and your beak looks like it’s for delivering death.
Pelican: I saw on Twitter all these people were saying I was going to swoop in and steal their children at the games. I was hoping that’d go away.
Me: nope. it hasn’t. everyone’s still creeped out. I used to be like, “If you boys don’t go to sleep, I’m gonna let the cucuy come get you” to my sons. Now I’m like, “If you boys don’t go to sleep, I’m gonna let the New Orleans Pelican come get you.”
Pelican: :(
Me: sry. it works though. They go right TF to sleep.
Pelican: good, I guess.
Me: it really is. Have you ever tried to put a kid to sleep?
Pelican: no. I’m a pelican, remember?
Me: that’s right. My fault.
Pelican: what’s a cucuy?
Me: oh. Yeah. Sorry. The cucuy is like the bedtime monster for Mexicans. He’s basically a Mexican bogeyman.
Pelican: what’s a Mexican?
Me: YOU DON’T KNOW WHAT A MEXICAN IS????!!!??
Pelican: BRO, I AM A PELICAN.
Me: right, right. I keep forgetting. My bad.
Pelican: so what should I do?
Me: about what? The cucuy? He’s fake. Don’t worry about it.
Pelican: No, fool. Everyone being scared.
Me: oh. who even knows, man. I guess just don’t, like, just don’t sneak up on people or anything. People will get used to looking at you. Everyone got used to looking at Popeye Jones. They’ll get used to looking at you too.
Pelican: True, true. All right. Thanks, man.
Me: Later, hater.
Pelican: Peace, pelican grease.
Me: cute