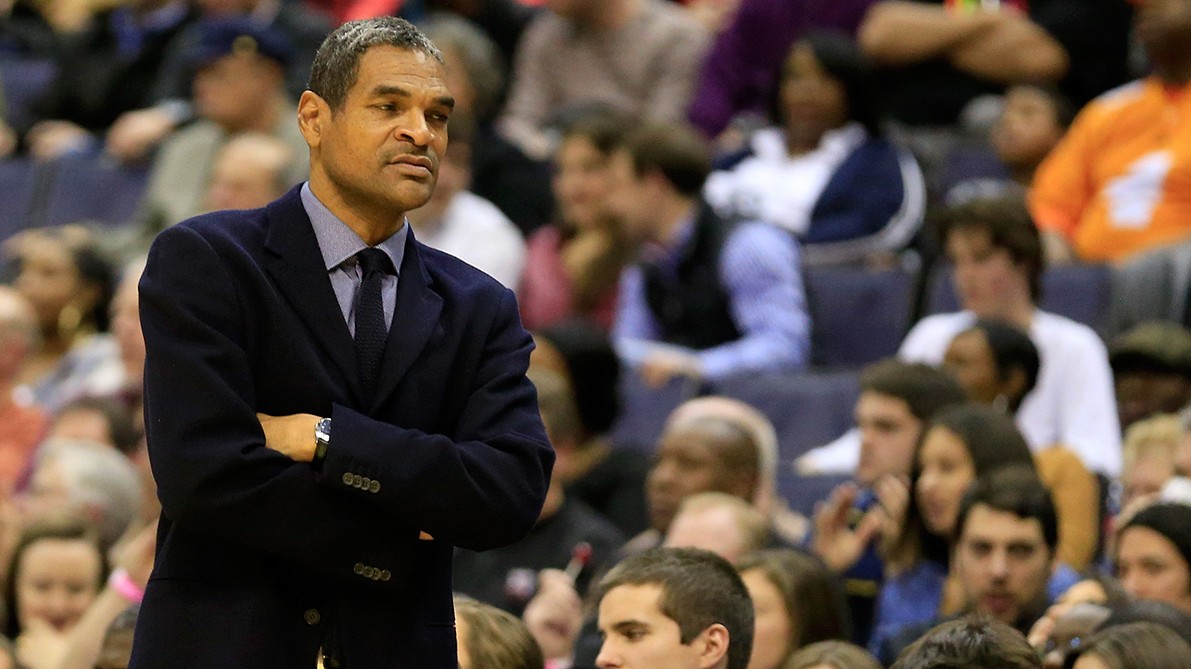 Here’s the thing about Detroit’s only semi-surprising decision to fire Maurice Cheeks on Sunday: If you put together a weird roster that is going to require innovative management, I’m not sure Mo Cheeks, bless his heart, is the right guy to coach that roster.

It was clearly going to take time for any coach to get a handle on the unwieldy roster Joe Dumars provided Cheeks, the eighth head coach Detroit has had since Dumars took over the top personnel job in 2000. Dumars splurged on Josh Smith in free agency, even though Dumars and everyone else knew it would be tough to shoehorn Smith, a power forward, into a rotation that already featured two young big men worthy of extended minutes.

Any coach would have initial getting-to-know-you trouble fitting Smith, Greg Monroe, and Andre Drummond together on the floor. None of the three can shoot outside of 15 feet worth much of a damn, and there isn’t a single above-average high-volume outside shooter among the perimeter players the Pistons have put around them. (Chauncey Billups, at this stage, doesn’t really count, and Gigi Datome, a tweener forward with a killer outside shot, never earned Cheeks’s trust.) You can move the chess pieces around all you like, but if all three bigs are on the court at once, Smith is going to have to spend some time hanging far from the basket. There’s only so much real estate near the rim. And if Smith is going to chill in his happy zone out there, then he’s damn well going to jack some awful jumpers just because.

The ultra-big look has failed badly on both ends of the floor, in ways both predictable and surprising. Scan the lineup data on NBA.com and you’ll find they are basically the worst heavy-minutes trio in the league outside Philadelphia. It’s easy to say, then, that perhaps those three should not be on the court together so much. That’s harder to accomplish in practice. Those three are Detroit’s best players, and Smith, the triumphant new free-agent signing, is also the team’s highest-paid guy. It would have been bold almost beyond precedent for Cheeks to bring one of them off the bench right away, or even to stagger minutes in such a way that they barely overlapped after the first stretch of each half.

Cheeks took some hesitant steps in more creative directions, but they never really stuck. The big trio has logged about 14.5 minutes together over Detroit’s last 12 games, down from about 19 minutes per game before that. Detroit has actually outscored its opponents in 176 minutes with the triple-big lineup on the floor over that stretch, a very encouraging development after a miserable first 38 games. But the margin is small, just plus-19 over those 12 games, and the Pistons piled up those positive numbers in wins against mostly bad teams — Orlando, Philly, and banged-up versions of the Nets and Nuggets in a weekend back-to-back. And the triple-big group in those two wins was back to logging nearly 19 minutes a game.

Things were trending the right way in some vague sense, but they never had any staying power or reliable pattern. The team performed better and looked healthier with just two of the three bigs on the floor; considering only lineups that have logged at least 15 minutes together, the Pistons were a collective plus-44 in 649 minutes in which two of the bigs played without the other, per NBA.com. That’s good!

Cheeks likely should have gone to such setups more aggressively, and earlier. Perhaps he was headed that way. But the casualty in that process had too often been Monroe, lately left to rot on the bench during fourth quarters — Detroit’s ugly undoing for much of this season, in many awful fall-from-ahead losses. Monroe and Drummond, the frontcourt of the future, barely got any time together without Smith; such lineups (using the same 15-minute qualifier to root out tiny sample sizes) have logged only 72 minutes together combined all season, per NBA.com. That’s not good for Monroe’s progress, the team’s growth, or Monroe’s trade value as he approaches restricted free agency.

In a broader sense, things just weren’t quite right. Smith’s shot selection is grotesquely out of control in a way no team should permit. The Pistons too often look completely clueless and disorganized on defense, as I detailed with visuals here. Brandon Jennings remains a bad defender who mopes and too often plays without effort. Cheeks could not settle on one strategy for how Monroe and Drummond should defend the high pick-and-roll. They’d jump out hard on ball handlers on one possession, and drop back toward the foul line a few possessions later. Some coaches build such game-to-game adjustments into coherent game plans depending on their own rotations and the specifics of each opponent. Some teams are smart and experienced enough to manage that kind of constant change.

That didn’t appear to be what was happening in Detroit. Miscommunication was rampant; two defenders involved in a pick-and-roll often had different understandings of how they were to defend the play, and rotations behind the action were incoherent. Detroit was hemorrhaging the easiest baskets in the game — open corner 3s (only Philly has allowed more) and shots at the rim off cuts, per Synergy Sports.

Some of that was inevitable. Jennings is a poor defender. Monroe is slow-footed and low to the ground. He has good hands that help him generate steals, but he has trouble containing pick-and-rolls and challenging shots at the rim — a killer combination of liabilities. Drummond will be an elite rim protector someday and shows flashes of being one now. But he’s just 20, with shaky footwork in space, late timing on weakside rotations, and some bad habits typical of young players. Kentavious Caldwell-Pope, recently demoted, has had some wonderful moments as an on-ball defender, but he has struggled like most rookies to pick up the fast-paced nuances of NBA-level rotations away from the ball.

To expect instant success, on either end, was unrealistic. But a better coach would have the Pistons in a better place by now. Look at what Steve Clifford has managed in Charlotte, amid a pile of injuries, just by installing an easy-to-understand and conservative defensive scheme that recognizes the limits of the team’s plodding centerpiece big man, Al Jefferson. I’ve no clue what someone like George Karl would have done on offense, with the team’s spacing and rotations, but he’d have done something better than this.

Maybe Cheeks just needed more time. He won’t get it, and that’s why you sign someone with his shaky head-coaching track record to a two-year deal instead of the mammoth sort of long-term contract the Cavaliers lavished upon Mike Brown in the offseason. There was no bidding war for Brown’s services since the Lakers were still paying Brown after firing him, and Detroit’s anxiety about paying three head-coaching deals at once surely factored into its short-term move with Cheeks. They’re still paying Lawrence Frank, currently writing reports for the Nets (they actually exist!), and they’ll wait until the offseason to hire a big-money replacement for Cheeks.

It’s clear now that Dumars may not be the one who gets final say in that hire. There have been rumblings for weeks that he is on thin ice after a moribund half-decade. Attendance has plummeted since 2008, and Detroit is on pace to rank below the league’s average in both points scored and allowed per possession for the fifth straight season. They are the only team to have managed that ugly double in each of the last four seasons, per NBA.com.

Dumars is on an expiring contract, and the transaction record has been ugly since age and trades dismantled a team that made a remarkable six consecutive conference finals. The Ben Gordon–Charlie Villanueva free-agent horror show in 2009 was a bit of irrational exuberance meant to keep the franchise relevant for the beloved late owner’s family — and to maintain a highly publicized sellout streak. Dumars paid dearly to get out from under the Gordon deal, sending a first-round pick to the Bobcats as the sweetener to Gordon’s skunked beer. He overpaid Rodney Stuckey, Jason Maxiell, and Richard Hamilton on new contracts, with Hamilton’s payday coming well in advance of any required action. He dealt away Arron Afflalo for nothing (well, actually, for cap space), and took a big swing on Smith’s talent.

But remember: This is the man who built the 2004 champs and nailed the draft in selecting Monroe and Drummond in the back half of the lottery. He ain’t dumb. But the Pistons have been rickety, and Dumars’s status as a franchise legend has likely bought him more struggle time than any other GM would get. Who knows: Dumars, and not Cheeks, might be out today if the team’s ownership were confident it had a no. 2 guy in-house who was ready to handle the trade deadline. It would surprise almost no one around the league if someone else is running the team next year.

Dumars will take the lead as we approach the trade deadline, though it’s clear Tom Gores, the team’s owner, will have significant input into the Pistons’ course. Everyone is wondering about Monroe and even asking the Pistons about him. Detroit has been unresponsive so far, per sources around the league, and that’s the right move. The Pistons are right in their belief that Monroe is not worthy of a max contract, not even of the smaller “max” players get after their rookie deals expire. A big man who is a net-minus defender and lacks shooting range is a tricky piece that needs just the right context in order to thrive. He’s like a plant with picky climate requirements. The Pistons should hold the line, even though they — and the entire NBA world — know Monroe’s agent, David Falk, has made a career of finding the one suitor willing to make that max bid. Nearly a dozen teams will have max-level cap space, or something close to it, this summer.

The Falk factor, plus Dumars’s accurate view of Monroe’s limits, has the Pistons and Monroe at something of a standoff. That’s fine. That’s how this stuff works. That does not mean you trade Monroe just to do it, or to clear up the big-man logjam, if the return is insufficient. He’s much closer in age to Drummond than Smith, and thus a more natural long-term fit next to the team’s true franchise player. He’s a freaking load on offense, a brute in the post and on the boards, with top-notch passing skills.

Smith’s deal is long, and almost certainly untradable for anything but one of the league’s dwindling number of other albatross long-term deals. But the Pistons should explore any Smith-related options, even ones that make them a bit queasy, and be prepared to stand pat if they don’t find any workable ones. Monroe is a valuable asset, and even a max-level contract will get proportionally less painful as the salary cap goes up and up every year. That new deal, Smith’s mega-contract, and Drummond’s first veteran contract would overlap only for a single season — in 2016-17 — and Detroit’s cap sheet is otherwise pretty clean with Stuckey and Villanueva finally coming off this summer.

It’s not like this team was going anywhere in the near term, anyway. It should be a bottom-rung playoff team in a terrible conference, and that was its likely destination in the first place. The Pistons are in the early stages of building something, and that something will probably require the jettisoning of either Smith or Monroe at some point. But that point doesn’t have to be now. Let’s see what a new coach can do.

Do You Believe in Sochi Sibling Miracles? Yes!