Stephen Curry Can Be the Next Steve Nash, But Does He Want to Be? 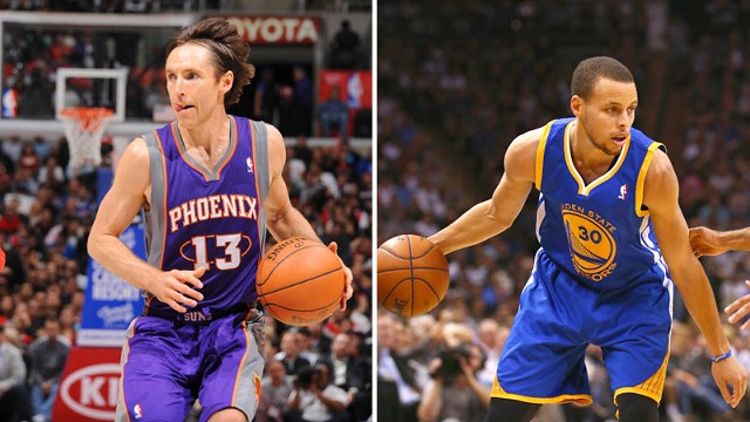 No part of what’s been a mostly predictable NBA postseason has been more entertaining than Stephen Curry’s emergence as a bona fide superstar. Even on the playoff stage, where opposing coaches knew exactly what Curry wanted to do, and how he wanted to do it, defenders were still resigned to simply crossing their fingers and hoping he would go cold.

It’s treatment typically reserved for scoring machines like Kobe Bryant and Carmelo Anthony, two potent scorers who have frustrated defenses for years with their incredible shot-making. Curry has joined that rarefied company, and in terms of his ability to pile up points, the comparisons are apt. What sets Curry apart, though, is that he has the potential to be much more than a brilliant individual scorer. He can be the maestro of great offenses for years. It’s not Kobe or Carmelo to whom Curry should be compared. It’s Steve Nash.

The Curry-Nash comparison is certainly not a mind-blowing new concept. The similarities between Curry and Suns-era Nash are pretty evident — both are elite shooters, high-IQ players, ambidextrous finishers, and creative passers. Nash may not have put up the points that Anthony or Bryant do, but his influence on an elite offense (the same ability Curry may have) was possibly greater. Despite never once averaging more than 20 points per game, four of Nash’s Suns teams rank in the top 25 all time in terms of offensive efficiency. The only other players anchoring that many teams in the top 25 are Magic Johnson and Michael Jordan.

Given the aggressive nature of today’s NBA defenses, any offense with a primary option who isn’t a willing and capable passer has a cap on its potential. LeBron James, one of the most well-rounded superstars in the history of the game, has always embraced this, and even the formerly tunnel-vision-afflicted super scorer Kevin Durant has started to accept it.

Nash didn’t morph into a playmaking savant until his move to Phoenix, which happened well into his career. It was with the Suns, aided by experience and the guidance of Mike D’Antoni, that Nash fully embraced the art of making his teammates better. Whether it was a shift in his own basketball values or a matter of pragmatism, Nash improved his teams offensively not because he controlled the game through his scoring or shooting, but because he used the threat of each to create chances for others. It wasn’t always with physics-defying passes, either. More often than not, Nash made the simple play that allowed his teammate to have an advantage when shooting or driving against a defender. He was a master at what in coaching terms is called “creating closeouts,” or forcing help defenders to gravitate toward him, sometimes just a step or two, and putting them in a tough spot to recover back to their original man. Nash played the role of the decoy to perfection, a role made possible because of the threat his shooting presented. With the ability to convert jumpers from any spot on the floor with great efficiency, defenses were always forced to pay attention to Nash wherever he went at the expense of guarding his teammates. It’s why Gregg Popovich always famously tried to turn Nash into a scorer during those epic Spurs-Suns clashes in the mid-’00s — he’d rather get burned by Nash’s jumpers than have to worry about him getting the entire team involved in scoring.

This is what Curry, who is just entering his prime years, should understand. At a certain point, teams want players with Curry’s array of talents to simply be scorers. And in Golden State, he has the chance to be more. There will always be the notion that Nash became Steve Nash, NBA MVP, because of D’Antoni’s system, and therefore Curry would need to luck into a similar system to truly capitalize on his immense playmaking potential. That’s somewhat of a half-truth. D’Antoni’s system succeeded on the same basic principles as the current Warriors offense does under Mark Jackson — play fast, spread the floor with wings who can shoot, and give the decision-making power to the primary ball handler, which more often than not is Curry. It’s certainly true that Nash and D’Antoni’s system had a mutually beneficial relationship, but what made it work was Nash’s ability to pass and willingness to seek any small edge for his teammates to succeed.

That is the challenge now facing Curry. Right now, he is still in the process of figuring out who he is and what he can do. After this postseason, it’s clear to Curry and those who watched him that he can dictate a game through sheer scoring power, but his impact on the offense was much bigger than that. When Curry’s space-creating shiftiness was limited due to a sore ankle, he was forced to slow down his game, and we saw the amazing lefty hook passes float over defenders and lead to easy buckets. Not only did he display the ability to make all the simple and extraordinary passes that made life easier on his teammates, but he showed an understanding that his team could function at a higher level because of it — the same understanding Nash gained in Phoenix.

As a young player whose definition still lies somewhere between being potent individual scorer and unselfish playmaker, Curry has a decision to make about which direction he wants his offensive game to go. If he stays the same type of player he is now, he will still be an entertaining force, but perhaps not one that makes his entire team unstoppable. As Nash enters the twilight of his career in L.A., Curry may very well be his successor. But it’s up to him to decide whether that’s the kind of superstar he wants to be.