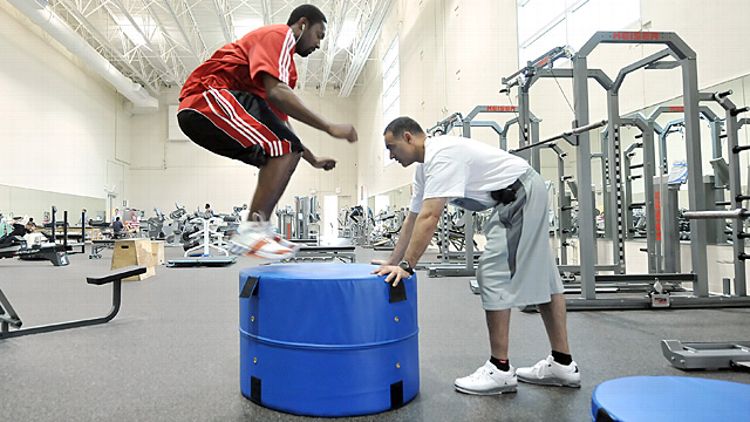 Relentless is a sports self-help/inspirational book by famed athletic trainer Tim Grover that reads like it was written by the love child of Gordon Gekko, Ayn Rand, and Sonny Vaccaro. Imagine The Onion doing a parody of an ultra-sociopathic Michael Jordan with the constant roar of the author swinging his dick like a helicopter rotor in the background and you have Relentless.

The moment I knew that Relentless would be a special read was when I got to Grover’s list of 13 traits that define a “Cleaner,” Grover’s term for the ultimate, take-no-prisoners type of winner exemplified by Michael Jordan. Why 13? “To remind you that there is no such thing as luck,” writes Grover, who is mostly known for training athletes in a sport where hitting the same percentage of your shots as a coin flip means you’re really good.

“There are circumstances and outcomes and you can control both if you desire.” Grab those bootstraps, you whiners! Anyway, there are 13 rules and all the rules are labeled “#1.” Why label every rule with the same number? Excellent question! “ … because if you give people a numbered list, they think #1 is the most important and the rest just follow behind.” OK, so why not just use bullet points or dashes or something? Don’t you think it’s a little confusing to be, like, “rule #1” and have it mean 13 things? “If it’s a long list they lose interest after #3 or #4.” Well, I don’t know … Adderall? “If I give a player a list of things he must do to stay strong and healthy, and he skips any steps, none of it works.” So tell them not to skip steps. I mean, are you more or less likely to skip steps when you can’t differentiate them from each other? “The same is true for this book. You can wander through these chapters in almost any order, and I think you’ll find the last as important as the first” So, you’re telling me I can skip steps? Why not write them in a circle like chore wheel? I’m confused, Tim Grover.

But first, who is Tim Grover? Tim Grover is the owner and CEO of Attack Athletics and, most famously, the former personal trainer of Michael Jordan. He’s worked with Kobe Bryant, Dwyane Wade, Gilbert Arenas, Charles Barkley, Eddy Curry, and many others. He’s got a well-earned reputation for being able to take elite athletes to the pinnacle of fitness and help rehabbing athletes come back from injuries stronger than ever. When Jordan needed to rebuild his body for baseball — an endeavor that surely proved there are limits to a Cleaner’s ambition — he called on Grover. When Wade was dealing with injuries during the 2012 NBA Finals, Grover flew in to help him get through the series. When Eddy Curry needed to drop an entire Reese Witherspoon worth of weight in a semi-quixotic quest to make an NBA roster, he called Grover. Curry was signed by the Heat that year. There is no doubt that Grover gets results.

Which brings me to the nagging question that anyone who has followed sports for the last 20 years should ask themselves when they encounter the story of a trainer who gets incredible results: ummmm, PEDS? Grover has always denied using PEDs as part of his prescribed regimens. In a recent interview with TrueHoop’s Henry Abbott, when asked if using the more recovery-oriented PEDs would help Kobe Bryant come back from his Achilles injury quicker, Grover responded, “We need to stay within the guidelines that the NBA has set up.” Which is nice to say, except that Grover’s book is about describing the mind-set of a person who is transgressive, who doesn’t respect other people’s rules, and who unleashes his dark side to do whatever it take to reach the top of the pyramid and stay there. From page 83 of Relentless:

You know the story of Dr. Jekyll and Mr. Hyde? A respected, upstanding doctor discovers a potion that temporarily turns him into a dark, sinister predator, and for a while he finds he enjoys being free from fear and morality and emotions, not caring about anyone or anything. For the first time in his life, he does what he feels, not what he’s been taught.

Jekyll lives quietly by the rules; Hyde acts on impulse and instinct; he exists in Jekyll’s Zone. Hyde does whatever he wants and doesn’t care about the consequences or whom he has to destroy in the process.

If it’s not clear from that quotation, Grover regards Mr. Hyde’s pure embodiment of the dark side of human nature and unrepressed predatory instincts the ideal. In other words: Tim Grover, who always abides by the guidelines the NBA has put into place regarding PEDs, uses a story about a man who takes a chemical potion to illustrate the idealized mind-set of the ultimate winner, a Cleaner. And the book is full of these kind of eyebrow-raising passages. Page 97:

Be honest: Would you be as successful if you followed all the rules and always behaved and never took chances? No, you’d be just like everyone else, scared about failing and worried about being liked.

The entire book reminds me of Colonel Jessup right before he admitted he ordered the code red. There are the anecdotes about working with various athletes struggling with injuries and getting results in only a few days that team training staffs couldn’t get working with the athlete all season. The book begins with a story about how Wade called on Grover during the ’12 Finals to help him play through a knee injury serious enough to require offseason surgery. According to Grover, he worked with Wade alone for a few days and suddenly Flash was back to being the on-court killer that Grover had always known. You read these stories waiting for the part where Grover goes “and then I applied 300 cc’s of pure rhino semen to the knee area.” And, hey, maybe Grover is clean; there’s never been any evidence linking him to anything untoward. But if the last 20 years of sports stories affords us anything, it’s the right to be suspicious. And there’s no way to read Grover’s veneration of rule-breaking and focused sociopathy and not wonder just how many rules end up broken.

For NBA junkies looking for a peek behind the curtain there’s some interesting Groverian theorizing on team power dynamics. For instance, there’s Grover’s “under 6-foot-9” theory” (“yet to be disproven,” Grover says), which states that “any player 6-foot-10 or over cannot handle harsh, confrontational criticism.” How can an athlete look like Bill Russell but feel like Sylvia Plath? Because of the horror of being gawked at by normal-size humans all one’s life. To bolster his claim that Tim Duncan, Kevin Garnett, and Hakeem Olajuwon are all huge pussies, Grover offers an anecdote about how Michael Jordan once said something mean to Luc Longley before a game. “Luc was done. I don’t think he scored once,” Grover writes. Luc Longley averaged three field goals on six attempts per game for his career and played in 44 games in which he didn’t score a point. Somehow I don’t think Jordan saying something mean is the thing that kept Longley from becoming Wilt Chamberlain.

Here’s Grover’s take on the Heat beating the Thunder in the 2012 NBA Finals:

So, who is this book for? Grover pitches the techniques found in this book as being for anyone looking for an edge in any competitive field, be it athletics or business. The problem is this isn’t realistic. While reading this book, I couldn’t help but think how awful it must be to live one’s life according to Grover’s 13 Cleaner traits. It’s a question of perspective; Grover’s perspective is that of a guy who trains the elite of the elite. These aren’t weekend pickup basketball players looking to take the next step. Jordan, Wade, Kobe, even Eddy Curry, these are guys who’ve already made it. Spending all your time being a single-minded, throat-ripping, on-court incubus is an absolutely acceptable mind-set for people who are paid millions of dollars a year — for a very limited period of their lives — to be in direct, physical competition with other similarly gifted and motivated individuals who are looking to usurp them. It’s all well and good for a gladiator to spend every waking minute preparing to step on the other guy’s throat, but the rest of us have to come home to spouses, roommates, and family who expect us to be fairly normal human beings. Releasing your dark side, doing anything to get what you want, pushing the boundaries of right and wrong — all that stuff sounds great if you’re a Somali pirate or Genghis Khan, but once you’re out of direct physical competition with people, this is not how you live a life.

Consider the ultimate Cleaner, Michael Jordan. A dominant, intimidating, and insatiable presence on the basketball court, whose post-playing career features divorce, a Hall of Fame speech dripping with vitriol, and running the Charlotte Bobcats into the ground, through the Earth’s mantle, and down into its molten core. Wright Thompson’s incredible look at Michael Jordan at 50 paints a picture of a man struggling to tame the demons that were once his greatest edge. “He’s trying to change, taking small steps,” Thompson writes of Jordan’s efforts to control his rage.