Sing of Arms and the Man: Why the Broncos Can’t Keep Leaning on Peyton Manning 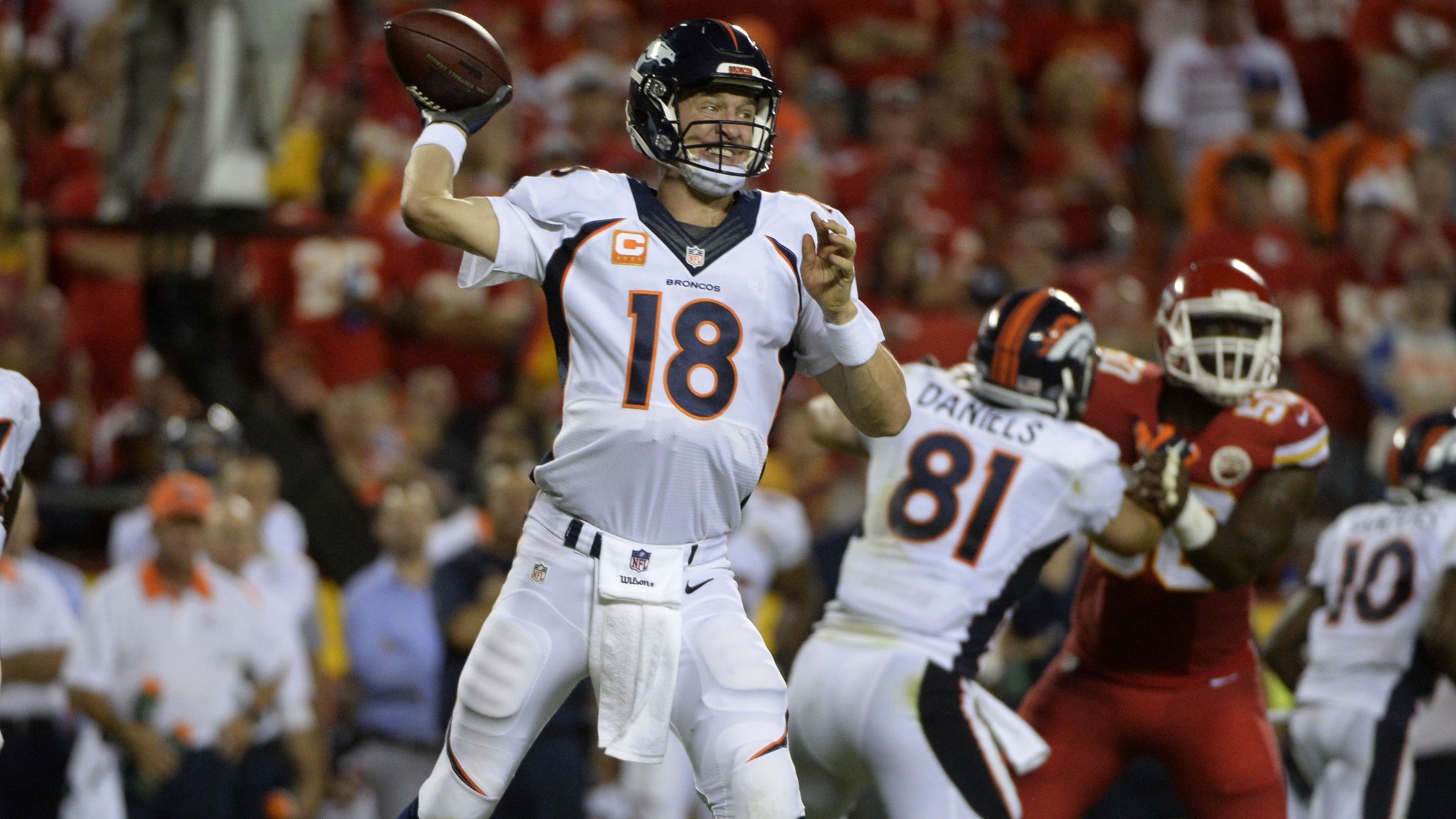 The easy thing to say is that Peyton Manning is toast. It’s the simplest story to tell because we tend to treat quarterbacks with binary adjectives. They’re either elite or not elite. Mobile or statuesque. Clutch or not clutch. By the end of last night’s game with the Chiefs, though, it was impossible to say the easy thing and reduce Manning down to an on/off switch. He’d managed to nearly throw the game away and then brought the Broncos back with what might be the last great comeback drive of his career before tagging in Andy Reid to finish off Kansas City.

And as we reduce Manning to that useful/useless signifier, we’re simultaneously pinning Manning’s problems solely upon his arm strength. That’s also too simple of an analysis. It’s obviously true that Manning’s arm is the weakest it’s ever been, but it’s not as if this is some sudden problem that has cropped up out of nowhere after a decade in which Manning threw the ball like he was Michael Vick in NFL Blitz. It’s a gradually more distressing problem that is reducing — but not eliminating — his effectiveness. There are myriad issues surrounding Manning and the Denver offense right now, and while some of them have to do with Manning’s arm, plenty of them do not.

If you’re working off the premise that Manning is finished because his arm is zapped and he’s thrown two pick-sixes in two games, that is a flawed conclusion. I don’t think either of those interceptions should be chalked up to Manning’s arm strength. The pick-six by Jimmy Smith last week actually would have been an easier interception if Manning had thrown the ball harder, because Smith would have been able to get a clean jump on the throw. Instead, because the throw was late, Smith had to delay his jump.

That interception was a misread from Manning; he saw a slot blitz from his left side by Kyle Arrington and naturally went to throw to that side. He saw Smith trailing behind the outside receiver in what appeared to be man coverage, but Smith was actually in a shallow zone that was designed to jump any hot route Manning was going to throw. When Jordan Norwood ran out to the flat and Manning lofted his throw over Arrington’s free rush, Smith and defensive coordinator Dean Pees got exactly what they were looking for. That decision was going to result in either a dropped pick or a pick-six, regardless of how strong Manning’s arm may or may not have been.

And last night’s pick-six by Marcus Peters again wasn’t really an issue of arm strength. It was a 7-yard throw to the numbers. The Chiefs sent a blitz after Manning on third-and-long and got Derrick Johnson running free through the B-gap, forcing Manning again to throw to his hot receiver on that side of the field — this time it was Demaryius Thomas. The throw wasn’t especially hard, but that was in part because Manning had the rusher in his face and couldn’t step into the throw. And even if it had been harder, it wouldn’t have mattered, because Thomas simply wasn’t looking for the football, which was placed behind him even as he began to break his route outside. The culprit here is a poorly placed pass, or miscommunication on how Thomas was supposed to break off his route, or the product of pressure on Manning. More likely, it’s some combination of the three.

I would be lying if I suggested that Manning’s arm seems fine. There have been throws to the outside in each of his first two games that have been weaker than not only the NFL standard but even what Manning has exhibited since returning from his neck surgery and joining the Broncos. There’s been talk about Manning throwing ducks over that entire time frame, and yet he hasn’t been as bad as he’s been these past two weeks.

Instead, the disconcerting thing with Manning is less his arm strength than his accuracy, which has been incredibly erratic. That’s not a reference to those interceptions or to the multiple dropped interceptions he has generated against the Ravens and Chiefs. Really, more than anything, it’s to the big plays he missed. And in many cases, he’s not underthrowing those passes. He’s overthrowing them.

Here, Manning stares down an earlier slot blitz last week by Arrington and makes the right read by throwing the go route to Emmanuel Sanders. Sanders is open, but Manning overthrows it by a full yard or two:

Then, just before halftime, he had another shot at hitting Sanders for a touchdown, and that one was also overthrown:

There were a few more examples of those sorts of plays in last night’s Chiefs game, like when he had Thomas streaking up the sideline and overthrew him early in the fourth quarter:

While Manning has underthrown passes during these first two games, these are all examples of plays where Manning’s accuracy — not his arm strength — was deserting him.

I suppose you could make the case that Manning is less confident in his arm strength and that’s forcing him to try to put as much as possible into throwing the football, sacrificing his accuracy as a result. There were certainly plays where that seemed to be the case Thursday night, including one play on which Manning actually finished his throw by lifting his entire back leg way up in the air like he was following through on a throw from the outfield toward home plate. For a quarterback whose mechanics were almost legendarily clean and consistent, you can see that things aren’t the same as they once were. Again, the end result of those issues revolves around accuracy as opposed to pure velocity.

There’s also the likelihood with many of these throws and decisions that Manning really isn’t very comfortable with the offense he’s running. Manning ran the same offense under Tom Moore in Indianapolis for more than a decade. When he went to Denver, he responded to a slow start — notably a three-pick game against the Falcons in Week 2 — by reinstalling the offense he ran in Indianapolis, in terms of both the playbook and the no-huddle tempo.

It’s little surprise, then, that Manning’s comeback Thursday night seemed to be fueled by a return to that tempo and to the shotgun he’s run for so long. Manning was under center and using a huddle on 13 of his first 22 offensive snaps, culminating in the Peters pick-six. The seven times he went to shotgun were almost all in obvious passing situations. Afterward, Manning went back to his old ways; 36 of his final 48 snaps were either in the shotgun, going without a huddle, or both. We’ll need the coaches tape to see what he was running, but given how many mix-ups there seemed to be in terms of setting protections and making hot reads, it wouldn’t be a surprise if there were to be a larger portion of the Moore playbook returning to the fold, both Thursday and in the weeks to come.

And it’s also true that Manning is under more duress than he has been in previous years, thanks to a dismal start from his offensive line. During his first three seasons in Denver, Manning was pressured on 14.3 percent of his passes, the lowest rate in the league by a comfortable margin. Andy Dalton is in second at 19.6 percent. In two games this season, that figure is up to 22.8 percent, which is roughly league-average. Manning has already been sacked seven times in two games. Last year, he didn’t take his seventh sack until Denver’s sixth game.1

The left side of Manning’s line is a mess. Rookie second-rounder Ty Sambrailo wasn’t supposed to start his career at left tackle against Terrell Suggs, Elvis Dumervil, Tamba Hali, and Justin Houston, but after Ryan Clady went on injured reserve, the Broncos had little choice. Matt Paradis, a 2014 sixth-rounder who won the center job over Ravens castoff Gino Gradkowski in camp, has been a sieve. And even left guard Evan Mathis, who perennially looked like one of the best guards in the league during the last few seasons in Philadelphia, doesn’t appear to be anything close to his usual self. In the past, Manning got the ball out so quickly that he was able to fade offensive line woes. With Manning trying to get as much as possible on his throws these days, he seems to be more susceptible to the poor line play.

Just as Manning’s arm problems are more fluid and inconsistent than a simple working/failing switch, Denver’s offensive woes are wider and more pervasive than the zip on his passes. There are serious questions that need to be asked about the offensive line, about the play calling, and about how this offense should be structured schematically. It seems incredible that John Elway decided to change horses midstream during the last days of the Manning era and hire a coach who was going to install a drastically different offense from the one Manning has run for most of the last 15 years, but it happened.

And yet, for all of those concerns, the Broncos are 2-0 with a pair of victories over AFC playoff contenders and a friendly schedule to come, given that they’re about to face the Lions, Vikings, Raiders, and Browns before their Week 7 bye. Granted, their defense is unlikely to score a return touchdown every game, nor are they likely to get a gift like the one Andy Reid provided with his decision to run Jamaal Charles into the line for his third meaningless end-of-half draw of the evening, with that no-upside handoff producing a Charles fumble that was taken to the house by Bradley Roby for the game-winning score.

The Broncos don’t need Manning to be the guy from 2013 or even 2014, but they need him to be a little better than he has been through two weeks, during which he’s posted a QBR of just 41.0. In the past, it was Manning who used his strengths to get more out of the limited players around him. Now, the roles may be reversed, and it may be the Broncos who need to acquiesce toward what a limited Manning can do in 2015 to get the most out of their fading star. Whether they can — or will — do that is a more complicated question than calling out the strength of Manning’s arm.

'The Ropes' Podcast: Mayweather-Berto, PED Controversies, and an Interview With Virgil Hunter