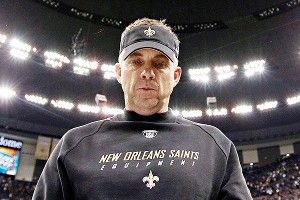 Let’s be very clear about this. The New Orleans Saints are not reeling today because the defense chose to implement a bounty system designed to injure other quarterbacks. They are not reeling because some jilted informant told the league about their secret club. The Saints will be without Sean Payton in 2012 because they committed what the NFL perceives to be a more serious crime: They lied to Roger Goodell.

The NFL’s official release on the suspensions implicates head coach Sean Payton (suspended for one year), assistant head coach Joe Vitt (suspended for eight games), and former defensive coordinator Gregg Williams (suspended “indefinitely”) as having lied to the league’s ongoing investigation into the bounties. Williams is identified as having “intentionally misled” investigators in 2010, while Vitt “fabricated the truth” in his interview with the league that same year. The evidence against Payton appears to have been even more damning. When general manager Mickey Loomis (also suspended for eight games, making Loomis the first GM in league history to earn a suspension) told Payton in 2010 that the organization was being investigated for the bounty program, the report suggests that Payton went to Williams and Vitt before their interviews with the league’s security and told them to ” … make sure our ducks are in a row.” It doesn’t appear that Payton was interviewed as part of the investigation at that time, but when he denied all knowledge of the program in a 2012 interview with the league, they showed him an e-mail from 2011 in which Payton added a very expensive postscript: “PS Greg [sic] Williams put me down for $5000 on Rogers [sic].” The message refers to Aaron Rodgers, who the Saints were about to play in the NFL’s opening game of the season. When presented with that evidence, Payton admitted he was referring to the Packers quarterback. That postscript (or not having a separate Gmail account to use in lieu of his nfl.com e-mail address) will cost Payton $7.5 million by virtue of his one-year suspension without pay.

You can say a lot of things about Goodell and the NFL, but they’re not naive enough to believe that the Saints were the only team in football to implement a bounty program. The public responses to the story from both current and retired players around the league have almost universally suggested that bounty programs have existed elsewhere around the league for years. The NFL’s release notably suggests that there’s not enough evidence to convict any other parties of the same crime and leaves the door open for future sanctions, although it appears to have a definition of the word “bounty” that doesn’t simultaneously involve targeting opposition players and/or providing compensation for injuring them:

While NFL staff has interviewed people in connection with public allegations of bounty programs at other clubs, no evidence was established showing that the programs at other clubs involved targeting opposing players or rewarding players for injuring an opponent. Commissioner Goodell emphasized that if additional information is brought to his attention that discloses bounties offered for injuring specific opposing players, he will revisit the matter to consider additional discipline.

Instead, Goodell obviously hopes that his penalty will serve as a deterrent to the rest of the league, even if other teams in the league have committed similar acts. In that sense, it’s not much different from the Spygate scandal with the Patriots in 2007. When the Patriots were caught taping the Jets’ defensive signals and punished shortly thereafter, stories of other teams employing less-obvious methods of signal-swiping blazed through the league. As former Cowboys and Dolphins head coach Jimmy Johnson noted at the time, ” … some of the coaches have selective amnesia because I know for a fact there were various teams doing this. That’s why the memo was sent to everybody. That doesn’t make him [Belichick] right, but a lot of teams are doing this.” Because none of the league’s other teams left video evidence, though, the Patriots were the only team punished for their sins. Outside of the indefinite suspension levied on Williams, now with the Rams, it seems exceedingly likely that the Saints will be the only team punished as part of Bountygate.

The problem with attributing the huge penalties to the nature of the crime is that the NFL simply hasn’t established a pattern of punishing illegal hits with exorbitant penalties. Steelers linebacker James Harrison is almost universally regarded as the player most comfortable with breaking the league’s rules on hitting offensive players, and yet, when he was finally suspended after repeated fines and warnings, it was for a total of one game. The fines handed out to players rarely come in at anything more than a game check. If the league is serious about changing the game’s culture when it comes to big hits (debatable at best), there’s scant evidence of it in their previous sanctions of players. The penalties here are undoubtedly greater because of the institutional nature of the illegal hits, but there’s an enormous gap between the precedent for dangerous tackles and what the Saints got waylaid by yesterday.

On the other hand, if you look at this penalty through the prism of another incident, the punishment makes much more sense. Do you remember the last time a member of the NFL community prominently lied to Roger Goodell about illegal deeds? It was back in 2007, when Michael Vick pleaded guilty in federal court to arranging dogfights, only months after he assured Goodell that he had nothing to do with dogfighting. After Vick pleaded guilty, Goodell instantly suspended Vick indefinitely and cited Vick’s lie as one of the reasons why Vick was suspended. Vick would later go to jail and was eventually suspended for the first three games of the 2009 season upon his return to the league.

The only other player I could find who received an indefinite suspension from the league during that time frame was Packers tackle Johnny Jolly, who was suspended after being charged with felony possession of codeine and violating the league’s substance-abuse policy by testing positive for the same drug. It’s hard to lump dogfighting and felony drug possession in the same bucket with an unsuccessful bounty program on opposing quarterbacks. The two players who were suspended for a year without pay, like Payton, were Pacman Jones and Donte’ Stallworth. Jones had been arrested five times in two years and questioned in five other cases. Stallworth killed a man while driving drunk and was convicted of both DUI and manslaughter. Are we seriously to believe that the NFL equates killing an innocent man with Sean Payton’s role in Bountygate? Of course not. Stallworth admitted his guilt and showed instant remorse. Belichick, for what it’s worth, reacted to his incident the same way. He wasn’t suspended for even a single game. Payton, Williams, and Vitt lied about their involvement. That’s why their penalties are so severe.

Had the two Saints coaches admitted to the bounties in 2010 and stopped the program then, the organization would have gotten away from the crimes with a slap on the wrist. Sure, they would have been fined a few hundred thousand dollars, and Williams might even have been suspended for a game or two, but there’s just no precedent for imagining this sort of suspension based solely upon the on-field crimes committed by the Saints. And by handing out these suspensions (without any apparent ability for Payton to appeal to anyone besides Goodell himself), the league is sending a different sort of message to the league’s teams. That message isn’t “Don’t have bounties.” It’s “Don’t lie to us.”

JaVale! We Take It All Back!