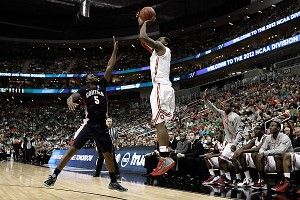 A 1-seed will lose
I’ve already explained why I like the Wisconsin Buzzcuts to beat Syracuse tonight, but Michigan State should also be on upset alert. I like Louisville’s chances against the Spartans, if for no other reason than the Cardinals get after it on defense. As has been the case all year, the big concern with Louisville will be its ability to score — especially since Michigan State plays great defense themselves — which is why I think Syracuse is more likely to lose than Michigan State. But if Louisville’s pressure can keep the Spartans offense in check and create some easy baskets off turnovers, if Russ Smith and Kyle Kuric have their jumpers working, and if Peyton Siva continues to play within himself and control the offense, Louisville should be able to put up enough points to pull off the upset.

Deshaun Thomas will have a huge game against Cincinnati
I hate myself already for jinxing him, but at the same time, I’m positive Thomas is a robot that has been programmed to do nothing but put a basketball through a hoop, and I’m pretty sure robots can’t be jinxed, so I think I’m good. Anyway, because Thomas is typically the third option in the Ohio State offense and because I’m convinced he’s said fewer than 10 words in his entire life, it seems like very few non-Ohio State fans realize just how good he is. But just because he’s not a marquee name doesn’t mean that if the tournament would’ve ended after the first weekend, a strong argument couldn’t have been made that he deserved the Most Outstanding Player award over Draymond Green and Jae Crowder.

Thomas is averaging 24.5 points and 9.5 rebounds in the tournament thus far, and I expect his numbers against Cincinnati to be similar, because the Bearcats and their four-guard lineup don’t have anybody who can guard him. Jared Sullinger has struggled against guys like Yancy Gates, who can match his size and physicality, and I could see Cincinnati’s athletic guards being able to contain William Buford and Aaron Craft. Outside of Gates, though, the Bearcats’ biggest starter is Sean Kilpatrick, who is just 6-foot-4 and 215 pounds, which is why I expect them to play mostly zone on defense. But even if Cincinnati plays zone to help negate Ohio State’s size advantage, doing so would create many more offensive rebounding opportunities, on which Thomas would surely capitalize, considering he’s the best offensive rebounder left in the tournament.

The fans of whoever wins between Ohio State and Cincinnati will be nauseating
This isn’t so much a prediction as it is a guarantee. Ohio State and Cincinnati are the only two BCS schools in Ohio, yet their rivalry consists of just nine games played in more than 100 years, which puts them at the top of the “why don’t these schools play each other more often?” list in college basketball. This makes the OSU-UC rivalry unlike anything else in the sport and is why this is an unprecedented bragging-rights game. As huge as it was for Kansas to beat Missouri in what could be the last rendition of the Border War, at least Mizzou fans have a bunch of favorable memories from the rivalry to look back on. But a majority of Ohio State and Cincinnati fans aren’t old enough to remember any games other than the 2006 blowout win for Ohio State, which didn’t mean much because the Buckeyes were a top-ranked team all season and Cincinnati was in a rebuilding period during Mick Cronin’s first year. Now that both programs are good, they’re playing each other for the second time in 50 years, and the possibility of scheduling a regular-season series is nonexistent for the foreseeable future, tonight’s game figures to be one that the winning team’s fans will be able to hang over the heads of the losing team’s fans for decades. And rest assured — I’ve been around both schools’ fan bases long enough to know that this is exactly what will happen.

Marquette-Florida will be the highest-scoring game of the tournament
Considering Norfolk State and Missouri put up 170 combined points, this is probably too bold of a prediction, but I’m feeling ballsy and I’m still disappointed that Missouri lost and deprived us of what would’ve been incredibly entertaining games against both Florida and Marquette. So I’m crossing my fingers that the Gators and Golden Eagles will make up for the Tigers’ early exit and unleash an offensive explosion tonight. This prediction isn’t just all about wishful thinking, though. Both teams like to get up and down and score a lot of points, and while they each are capable of playing good defense, offense is clearly the top priority for them both. This is why if Florida gets back to shooting 3s as well as they have all year, and if someone on Marquette can step up other than Crowder and Darius Johnson-Odom, there’s a glimmer of hope that we’ll see a final score in the 90s, which would hopefully serve as adequate eye bleach after watching Wisconsin beat Syracuse 54-49.

A non-Ashley Judd, non-basketball celebrity fan will be shown on camera
I’m going to cheat with this prediction and apply it to the next four days instead of just tonight, because I just don’t feel comfortable putting that much trust in Nick Lachey to show up to the Cincinnati-Ohio State game. But I do have confidence that at some point between now and Sunday, a celebrity who didn’t play or coach basketball at the school he’s cheering for and who isn’t Ashley Judd will be spotted in the crowd. If Cincinnati beats Ohio State, Lachey should be a lock to show up to the Bearcats’ Elite Eight game on Saturday, but as far as the Thursday and Friday games are concerned, I’d say the best bet is Andy North showing up to support his Wisconsin Buzzcuts.

I’d give slightly lower odds to Jason Sudeikis, Rob Riggle, and/or Paul Rudd to make an appearance at a Kansas game, and Mark Cuban and John Mellencamp to support the Hoosiers against Kentucky. And I know that it would be a long shot if any of them checked out a game, but I’m going to go out on a limb and say that there’s a chance we might see Zach Galifianakis (NC State), Danny Pudi (Marquette), John Boehner (Xavier), or Kid Rock (Michigan State).