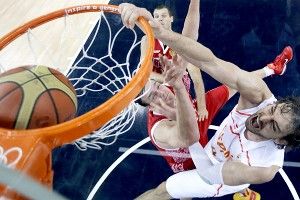 Explain this one to me: The Olympics organizers probably gave away $300,000 of revenue per basketball session by not having courtside seats, and yet they scheduled Friday’s men’s basketball semifinals so that …

A. Spain and Russia played at 5 p.m. London time as the “early” game.

B. Everyone in the stadium then had to leave.

C. They cleaned the stadium.

D. America and Argentina played the “night” game at 9 p.m. for a new crowd.

Sounds super greedy, right? And yet … they surrounded all four sides of the court with empty space? Don’t worry, it was even dumber in person. Speaking of dumb, I should probably mention that Spain nearly blew the semifinal because Russia said, “Hey, we’re going to swarm the Gasol brothers every time they get the ball, do you have a Plan B?” In the first half, the answer was “No!” And then everything changed, shots started falling, an inside-outside game materialized and Spain banged out an eight-point victory (and the silver medal at worst).

Things looked grim for them at halftime, when Russia was leading 31-20 and the Spaniards had missed 23 of 29 shots. Their only silver lining was a funky performance by Russia’s best player, Andrei Kirilenko, who was playing with the confidence of someone whose life had just been threatened by Russian mobsters before the game. Just kidding. But man, as someone who still plays basketball and knows that “I can’t make a shot, this is humiliating, I want to shoot myself” feeling a little too intimately, I recognized the dismay on his face pretty early. There’s nothing worse than going ice-cold on a basketball court. Especially when 12,000 people are watching and you’re letting an entire country down. Did he open the door for me to keep making fun of that $20 million contract that Minnesota gave him? Actually, yeah! It’s a little ajar again. I’m excited.

Anyway, when Spain made their belated surge in the second half — fueled by that inside-outside game that should have started an hour earlier, as well as six monster 3s from Jose Calderon and Rudy Fernandez — Russia had nowhere to go with Kirilenko floundering. Sergey Monya had already made his three 3s; it wasn’t like he was pulling a “Dan Majerle in the 1993 Finals” on us. He’s Sergey Monya, for God’s sake. Timofey Mozgov couldn’t get anything done down low against the Gasol hermanos. (I’ll pass on the punchline there.) Playmaker Alexey Shved was submitting a full-fledged, deer-in-the-headlights no-show (and throwing a big bucket of water on every writer claiming that he was going to really help the T-Wolves this season). Viktor played like total Khryapa, missing five of six shots. (Sorry, I had to.) So who was left other than old Kansas friend Sasha Kaun (14 garbage points) and Kirilenko (2-for-12 shooting, five missed free throws)?

Once the Spaniards realized nobody on Russia could hurt them, that was that — they started flying around on defense and draining 3s, delighting their contingent of singing/chanting/jumping Spanish fans. (I hate to keep banging this point home, but we really need to work on the whole cheering thing in America.) Spain even covered the six-point spread by two, much to the dismay of everyone who waltzed into a William Hill before the game and threw down money on the Russians. (If you’re wondering, I held off.) I spent most of Spain’s comeback feeling bad for Serge Ibaka, who was pretending to be just as happy as the other bench guys, only you could see the “Really? I played crunch time in the NBA Finals but I can’t get 10 minutes of run for the Spanish national team?” thought bubble floating above him. This would have been the weirdest subplot of the game if not for the writer sitting on press row who drank a beer during the second half. Does this stuff always happen on press row? I might have to sit there more often.

So what needs to happen for Spain to beat America on Sunday? First, they need to use the Gasols to draw double teams and find open shooters; if America tries to defend them one-on-one, then Spain should pound them down low. (Sounds simple on paper. Won’t be simple with dudes like LeBron, Durant and Westbrook flying around.) Second, they need to play Sergio Llull more. He’s a fearless energy guy (think Sasha Vujacic four years ago, only better and more likable) as well as their best all-around guard (it’s true), only they keep splitting his minutes with a banged-up Juan-Carlos Navarro. (If they play Llull enough minutes on Sunday, he’s a mortal lock to piss Kobe off at least three times. For that alone, they should play him.) Third, they need to play poor Ibaka more than 6.33 minutes — the exact number he played Russia, as amazing as that sounds — because they’re going to need his athleticism against Team USA. And fourth, they need to make 50 percent of their 3s, something they pulled off against Russia in the second half … so on paper, we know they can do it.

Can they beat us? Well, they’re too slow without Rubio — their perimeter guys can’t play slash-and-kick OR get to the rim (and remember, USA doesn’t protect the rim that well), which puts too much pressure on their big guys to create everything. The Gasol hermanos would have to combine for something like 50 points, foul out Tyson Chandler and Kevin Love and basically wreak havoc to steal the gold. I’m not saying it’s impossible … but it’s certainly not realistic, and that’s before throwing in the “making 50 percent of their 3s” part. Honestly, I’m much more afraid of Argentina tonight, especially because I probably just jinxed Team USA by sending in this blog post and assuming that we’d win. Don’t judge me — I wrote this thing in 22 minutes. Now if you’ll excuse me, I have to go find a burrito and eat half of it before throwing the other half away and feeling sick afterward. More on Monday.