Russell Westbrook: The Point and the Counterpoint 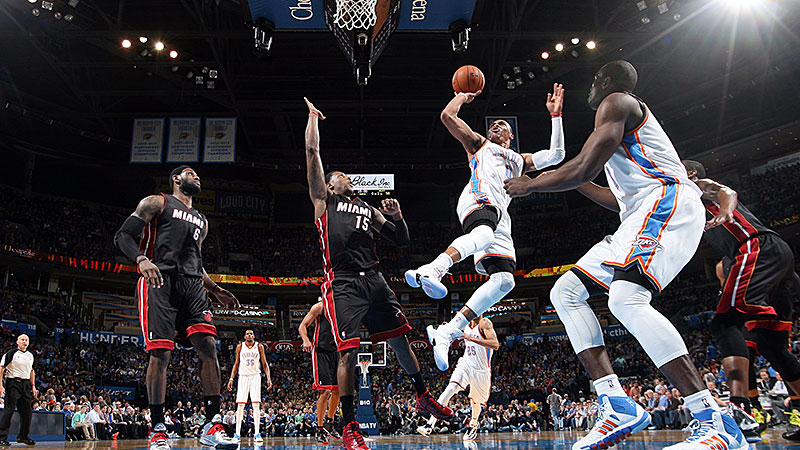 Back on Christmas Day, the Oklahoma City Thunder were in Manhattan to square off against the New York Knicks. The game wasn’t close — OKC torched the Knicks, raising its record to 23-5 in the process. Things were looking really good for the Thunder. Kevin Durant had 29 points, Russell Westbrook put up a triple-double, and America got a short-sleeved reminder of just how great these two can be together. Unfortunately, after the game, the orthopedic Grinch stole the Thunder’s Christmas joy; Westbrook’s knee swelled up, and a few days later he was back on the operating table for the third time in 2013.

It was cruel. Just months after the team’s 2013 playoff run was cut short by Westbrook’s meniscus tear, the team faced similar doubts. The next day, head coach Scott Brooks said, “Obviously we are a very good team with [Westbrook], and without him we’re still going to be a very good team.”

He was right. Although Westbrook missed the next 27 games, the Thunder managed to win 20 of them, mostly by clinging on to Durant’s flammable coattails. It was a remarkable stretch for Durant, who became the most SportsCenter-compatible player in the NBA. It was also an impressive stretch for the team; it absorbed the hit and played great basketball, even winning road games against the Heat and Spurs.

As a result, the Thunder were the talk of the league over the past seven weeks, and the NBA Internet caught on fire: 10 REASONS THE OKLAHOMA CITY THUNDER ARE BETTER WITHOUT RUSSELL WESTBROOK. (BEGIN SLIDESHOW.)

As an organization, the Thunder are often compared to the Spurs. This isn’t that surprising considering the team’s general manager, Sam Presti, learned the ropes inside the Popovich-Buford administration. After taking over in Seattle, Presti quickly became one of the best executives in the league in part by introducing many of the Spurs’ core philosophies. These include things like a great faith in international talent, player development, and core stability. It also manifests in strong roster depth, which comes in handy during the NBA’s extreme 82-game regular-season schedule.

Presti’s old team has demonstrated the merits of its philosophy once again this past week. Despite being on the infamous “rodeo road trip,” and without their All-Star point guard, Tony Parker, the Spurs somehow won both games of a brutal back-to-back against the Clippers and Blazers. In both games, young backup point guard Patty Mills led the Spurs in scoring, dropping 25 against the Clippers (Chris Paul had 11) and 29 in Portland.

Over the past 15 years, we’ve come to expect this kind of thing from the Spurs. Their win over the Clippers barely raised an eyebrow; it was just the Spurs being the Spurs. And no matter how hard you look, you won’t find a slideshow suggesting San Antonio is better off without Parker.

You won’t see it, because when Parker is playing for the Spurs, nobody’s blood pressure rises the way it does when Westbrook waves off the best offensive player on the planet. Andrew Sharp already laid out the arguments for and against Westbrook’s presence on the Thunder, but let’s look at the situation again after Westbrook’s first game back against the Heat on Thursday night.

So, one more time, with feeling: Are the Thunder better without Russell Westbrook?

Your answer to that question depends on which types of “facts” you lean on. Folks who look at advanced stats from this season can use numbers to build a compelling argument that says “yes.” People who watched the 2012 and 2013 NBA playoffs can easily build a strong case that says “no.”

If you want to argue that Westbrook is not helping the team win games, look no further than NBA.com’s lineup stats. According to the data, this season the team’s two most common lineups feature Durant, Serge Ibaka, Thabo Sefolosha, and Kendrick Perkins. However, the most common lineup features Reggie Jackson at the point, while the other has Westbrook there. Westbrook has played 287 minutes with these guys and, surprisingly, opponents have outscored that unit by 7.5 points per 100 possessions. That’s bad. Jackson has played with those same four guys for 525 minutes; they have outscored opponents by 6.4 points per 100 possessions. That’s good.

If you drill down further, you see similar results. In Westbrook’s 708 minutes played alongside Durant and Ibaka, the team is outscoring opponents by 3.2 points per 100 possessions. In Jackson’s 992 minutes with those two guys, that number is 10.0. In fact, out of Westbrook’s five most common three-man lineups, only one of them — the one that features Durant and Ibaka — has a positive net rating. Out of Jackson’s five most common three-man lineups, all of them have a net rating above 4 points.

With those numbers in mind, it’s hard to argue that Westbrook is helping the Thunder more than Jackson is. 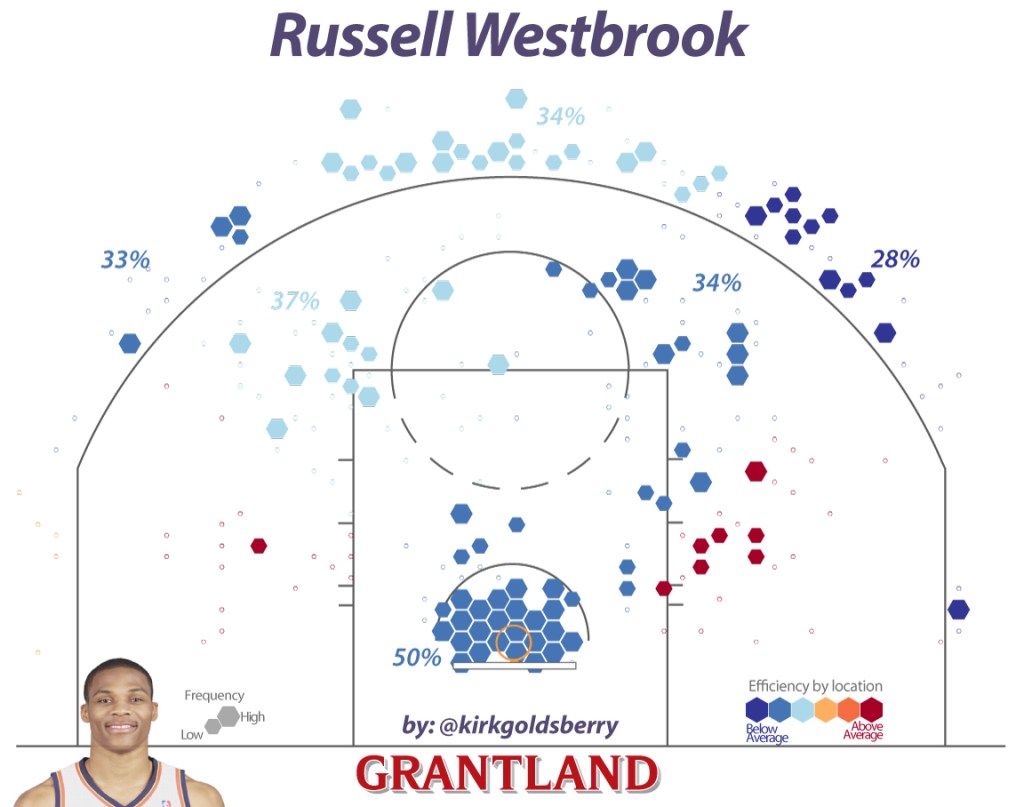 One of the issues with Westbrook’s game is his relatively inefficient scoring. I emphasize relatively because on most teams he would be the dominant scoring threat, but the Thunder aren’t most teams. Westbrook is a volume shooter by nature, but on a team that scores so efficiently, in so many different ways, a lot of his shots introduce an opportunity cost to the offense.

Westbrook is a below-average shooter, especially as a jump shooter, and it becomes hard to justify — from an analytical point of view — his propensity to shoot near the elbows or above the break. This is where the opportunity costs arise: Many of Westbrook’s pull-up jumpers could instead be a Durant iso play or an Ibaka pick-and-pop. Durant is one of the most efficient scorers in the world, and when Westbrook is on the court he gets fewer touches and his usage goes down.

In their win against the Lakers last Thursday before the All-Star break, Durant had 98 touches. In the loss to the Heat last night he had 65.

Maybe you find these numbers compelling. But many of us just recoil when somebody proposes that the Thunder are somehow better without Westbrook on the court. Numbers are one thing, but if you want to argue that the Thunder are better with Westbrook, just go review recent playoff histories. After Patrick Beverley collided with Westbrook’s knee in the first round of last year’s playoffs, the Thunder lost six of their next nine games, eventually being eliminated by the Grizz. It was a hurried exit for a team expected to battle much deeper into June. The last season that Westbrook finished healthy, the Thunder made it all the way to the Finals.

While the pro-Westbrook camp can’t lean on many analytical facts from this year to support their case, its reasoning is no less persuasive. The NBA changes in the playoffs, and regular-season analytics might not be the best predictors of postseason performances. There are no bad teams in the playoffs. In fact, the Western Conference playoffs this year will feature only very, very good basketball teams. Eliminating Marc Gasol and Zach Randolph in a seven-game series in May is a different challenge than besting the Milwaukee Bucks in January. Simply put, with Jackson as their point guard, the Thunder were an easy out in last year’s playoffs.

All of this has been a really long way of saying that being an NBA coach or general manager is hard; Presti and Brooks don’t have it easy. If they put their faith in lineup numbers, then Perkins would never play and Jackson would be their starting point guard. But they don’t do that, and they’re looking ahead to the playoffs, when the game is played on a different level. Still, it’s hard to argue that those lineup stats from the rest of the season are worthless. It will be fascinating to see if those trends continue, and what will happen if they do.

Thirteen years ago, when Mo Lewis leveled Drew Bledsoe, nobody in the world thought that would be good for the New England Patriots. Still, that was the moment an unlikely dynasty was born, and that is why sports are crazy. Reggie Jackson is not Tom Brady, but I’m not ready to say Russell Westbrook is either.