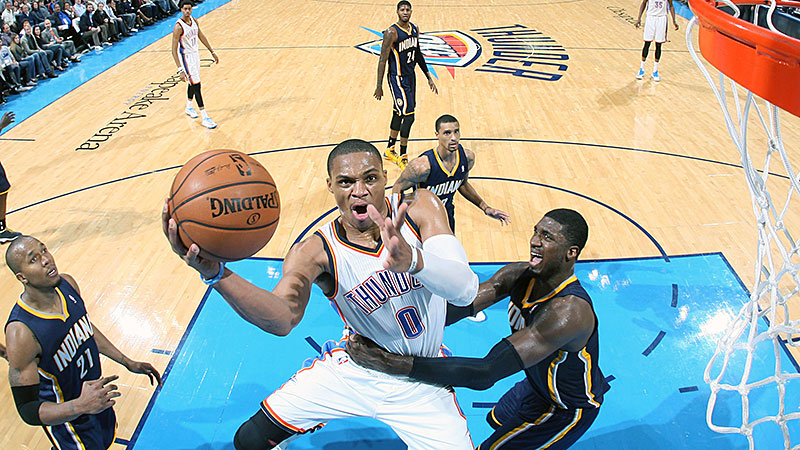 OK, so full disclosure: On Friday, after putting together that first-half NBA report card, we talked about answering a handful of questions for the second half of the season, too. Can Paul George give the Pacers enough scoring to make their offense dangerous in the playoffs? (Probably. He hit a slump but he’ll be back.) Can the Spurs’ superstars stay healthy through the playoffs? (Probably not!) Will Adam Silver win the battle for a new age limit? (Almost definitely.) Which decent teams will fall out of playoff range for good and start tanking down the stretch? (Bobcats? Timberwolves? Cavs?) Will the Rockets blast off or burn out? (This question was included mostly for the rocket puns. The answer’s probably the second one.)

But we’re not doing that today. Because all that stuff is secondary to the biggest question of the second half: What happens with Russ?

The God of Chaos comes back this week to continue his kamikaze missions to the rim, and it’s great news for those of us who missed him and all his batshit glory. 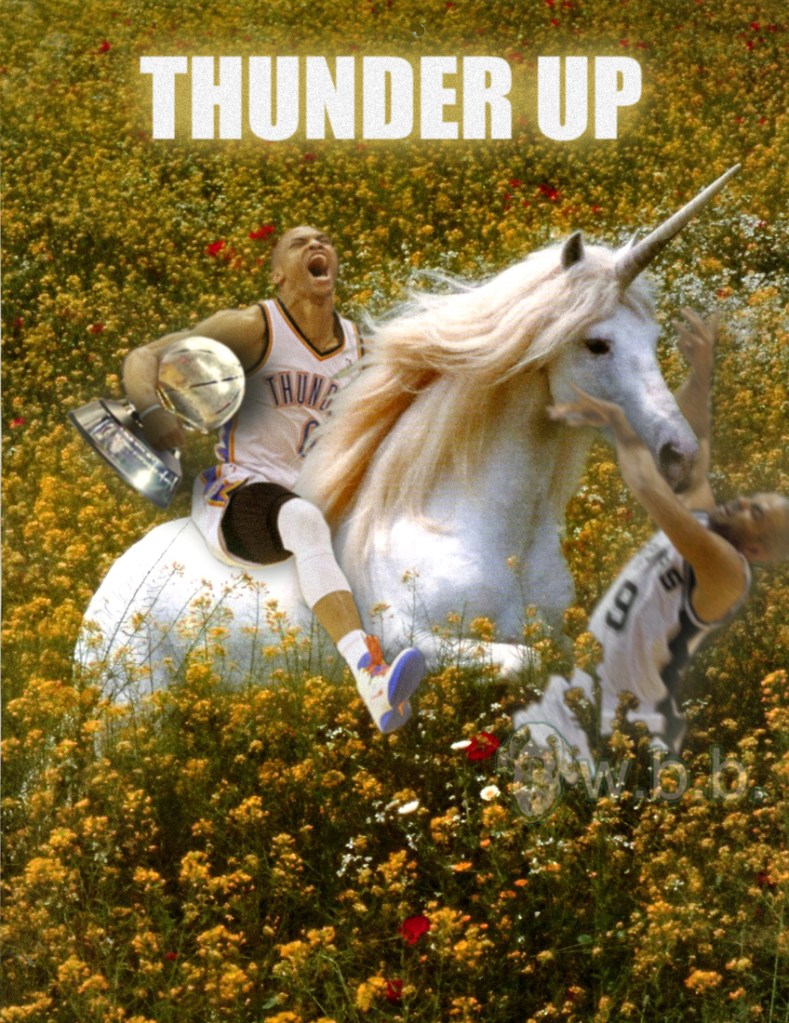 He’s one of the three or four most electrifying players in basketball when he’s on — only Blake and LeBron have better in-game dunks — and he’s completely insane roughly 15 percent of the time he’s on the court. So I’ve come to love Russell Westbrook over the years. He’s also spent his entire career staring down ridiculous expectations, surrounded by a hurricane of obnoxious opinions questioning his maturity and discipline and selfishness and everything in between. This has only made me love him more. In addition to murdering rims, he has a special talent for driving old white people nuts. It’s awesome.

But he’s coming back at a weird time. If you’re reading this, you probably know what’s been going on in Oklahoma City over the past few weeks. The Thunder have turned into the best team in the league. Their defense is better than it’s ever been, Reggie Jackson has become the perfect complement to Kevin Durant, and about eight months after he looked completely overwhelmed in last season’s playoffs, Serge Ibaka has turned into a legitimate weapon on offense, the kind of superstar who was worth choosing over James Harden. And it’s all happened with Westbrook on the sideline.

So we’re back to square one. The question people have been asking for four years. Would OKC be better off without Russell Westbrook?

After last season’s playoffs, you might have thought nobody would ever question Westbrook again. The Thunder were unwatchable without him taking pressure off Durant, the supporting cast was overwhelmed, the coach looked more clueless than ever. But in the past month, everybody has grown up. The supporting cast looks great now, Durant’s turned into a killer that can win games by himself, and Scott Brooks, well … he’s probably still Scott Brooks, but it’s hard to argue with the best record in the NBA. This makes Westbrook the giant variable in a formula that’s been dominant without him.

He’s apparently coming back against the Heat on Thursday, which seems pretty insane. If they lose that game — after beating Miami without Westbrook a few weeks ago — suddenly it becomes open season on all the hand-wringing we’ve come to know and dread over the past few years. It makes no sense to invite that scrutiny right out of the gate, while Westbrook’s still rusty, but that’s what is in play.

Whether it happens Friday morning on First Take or later in the year, you gotta know it’s coming. It’s inevitable. You have the MVP candidate everyone loves on one side, and the polarizing shoot-first point guard taking shots away from him on the other. It’s tension that it sells itself.

The difference is that now critics have proof to point to in these arguments, and what used to feel trolltastic and ridiculous isn’t quite as ridiculous anymore. In the past, when Westbrook would swallow up possessions from Durant, we were just guessing at what KD could do if he had full control. Now we know that he turns into the deadliest scorer on earth in that scenario.

So this is just a warning: As much fun as it’s been watching KD napalm the universe over the past few months, it could be just as stressful watching him come back to earth playing next to Westbrook. Throw in role players like Ibaka and Jackson, the added pressure on Brooks to manage all this, and it could get even more complicated. If it falls apart down the stretch, and OKC goes down before the Finals, it may not be Westbrook’s fault, but he’ll definitely get blamed.

It’s completely unfair to put him in this position, but it’s happening. As someone who loves Russell Westbrook, I’d like to say two things.

1. This sucks. Westbrook has gotten better every year, and now he’s fought through injuries, and it’s depressing to see all this coming regardless. If you put him on 25 other teams, he’d be a psychedelic version of Derrick Rose, and one of the most popular players in the league. Even next to Durant, he’s been one of the most addictive players in basketball.

2. This makes sense. Durant’s turned into the best drug the NBA has anywhere. This season has seen him become everything we ever dreamed, and he’s turned the Thunder into the best team in the league. The idea of Westbrook disrupting all that puts him in the crosshairs. It sucks, but it makes sense. OKC’s been so good without him, you can’t even blame anyone who scrutinizes what happens when he comes back. Especially if the Thunder lose too early in the playoffs.

We’ve watched this team come together for the past five years, and the next four months seem like a crossroad. If it all works and ends with the Finals or a title, we spend the summer talking about a dynasty in OKC. If it doesn’t, maybe we spend the summer wondering what OKC can get for Westbrook. Or maybe it keeps him and loses again next year, and KD is a free agent the following summer.

I have no idea how any of it plays out, but it’s the biggest story of the second half this year. The answer to the Russell Westbrook question has never been more unclear, and it’s never felt more important to the NBA. So here we go … The chaos starts Thursday.

Yet Sheikh Mansour did see in Barcelona's model something that dovetailed with his vision and goes beyond the football: from international expansion to the opening of new markets, from youth development to revenue creation there are parallels. It may be over-simplistic, but here there's a temptation to say that City, like Barcelona, want to be likeable; to avoid being seen just as arrivistes.

"Last time I checked, I didn't know that Kevin Long was the spokesman for the New York Yankees," McClendon told ESPN.com. "That was a little surprising. I was a little pissed off, and I'm sure Joe [Girardi] feels the same way. He's concerned with his team and what they're doing, not what the Seattle Mariners players are doing."