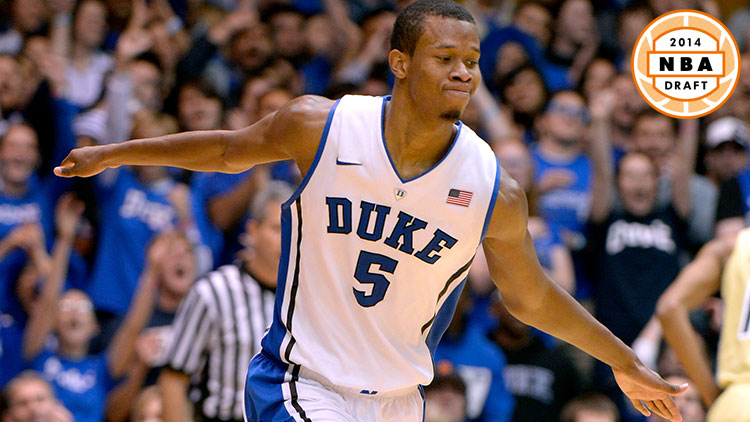 How many times in the past year did you tune in to see Jabari Parker at Duke, only to come away wondering about Rodney Hood?

For me, this happened almost every time I watched Duke.

Jabari had his moments — he looked invincible against East Carolina in November and I was convinced he’d be the no. 1 overall pick — but there were just as many games that left him looking not quite as great as you may have heard. But if you looked across the court, there was another 6-foot-8 wing with 3-point range and a guard’s ballhandling skills.

What about THAT guy?

This is about that guy. The story starts in Mississippi.

Mississippi’s not really known for basketball. It’s smack in the middle of SEC country, where any sport that’s not football basically gets treated like tennis.

Given the stereotypes, it’s surprising how much NBA talent the state has given us, even if the results have been uneven. There was Jonathan Bender, who went straight from high school to the NBA as the fifth pick overall and never panned out. And Travis Outlaw, who skipped college, fell to the bottom of the first round on draft night, and eventually caught on as a role player. There was Mo Williams, a McDonald’s All-American who spent two years at Alabama, then landed in the second round with Utah before linking up with LeBron and carving out an 11-year career for himself. Then came Al Jefferson and Monta Ellis, the two most successful yet.

“I was fortunate enough to be able to watch those guys coming up through high school,” Hood tells me during the NBA Finals. “Al Jefferson, Monta, Travis Outlaw. I’m trying to follow in their footsteps and make a name for myself. Add to the list.”

Hood’s from Meridian, a town of about 40,000 people in East Mississippi. He started playing basketball early, and he started with the ball in his hands. “Ever since I was little,” he says, “I always played point guard. All throughout high school, junior high. I hit a couple growth spurts and the guard thing just always stayed with me. It just comes natural.”

As he grew, one comparison began to follow him everywhere: “Everybody says Jalen Rose is somebody I have to watch, even though he’s a little older than me. It started back in high school. Everybody called me ‘Little Jalen.’ There aren’t too many left-handed guys out there who can handle the ball and shoot it.”

By the end of high school, he was a top 25 player in his class — 16th overall according to Rivals.com — but still under the radar. He wasn’t picked for the McDonald’s All-American game, and rather than land at a college basketball powerhouse, Hood chose to stay home with Mississippi State.

There was more talent on that team than you might remember. Arnett Moultrie — now a forward on the Sixers — was there; Renardo Sidney, a star recruit and NBA prospect from Jackson, was coming back; and Coach Rick Stansbury had been pretty successful over the years. When Hood showed up, he was part of the 12th-best recruiting class in the country.

“We had a chance to be a really good team right here in my home state,” Hood remembers. He slid into the starting lineup right away, averaged 10 points and five rebounds a game, and made the All-SEC freshman team.

The team didn’t do quite as well.

They started out 12-1 with nationally televised wins over Arizona and Texas A&M in Madison Square Garden, but things unraveled by the end of the year. They lost eight of their last 12, and when it was over, Stansbury retired, and Moultrie and Sidney both went pro — Moultrie was selected 27th overall, while Sidney went undrafted. Given the numbers he put up and the potential he showed, Hood probably could’ve followed them.

This is where Hood’s story breaks with his state’s basketball tradition. If you look at the Mississippi pros — Bender, Outlaw, Mo Williams, Al Jefferson, Monta — many skipped college entirely, and they all left a year or two earlier than they should have. Everyone but Bender went lower than expected, and most bounced around the league before they found the right situation. That would’ve been Hood’s story, too, but he flipped the script.

Instead of bouncing around NBA no-man’s-land, he went to the most traditional college basketball school possible.

Choosing Duke meant sitting out a year before he could play on any stage at all, but it also meant a chance to mature that guys like Monta Ellis and Travis Outlaw never had.

“It was good for me,” Hood says of the redshirt year. “I got to focus on my academics, did a lot of work with Kenny King, my academic adviser. I got stronger and got to learn the game more, just from watching. Every single day I just put my head down and went to work.”

He made enough of an impression on the court to get voted team captain the next year without ever actually playing a game for Duke.

This is also right around when Jabari Parker showed up to make everything more complicated. I grew up a UNC fan, and the year Hood sat out, I heard nonstop warnings from Duke fans about what this guy Rodney Hood was going to do next year. As soon as Jabari said he was going to Duke, all those warnings were about Parker. This didn’t bother Hood.

“Once he got on campus,” Hood says. “We clicked right away. I was looking forward to playing with another great player. Us both being 6-foot-8 wings that can do a lot of things on the court, we’re going to be great. We understood that we were both really good, and we were going to do whatever we could to take this team to the top.”

That didn’t quite happen. While Jabari averaged 19 points as the star and Hood chipped in 16, Duke went down to Mercer in the NCAA Tournament upset. You probably remember the coast-to-coast screams of ecstasy on a Friday afternoon. I definitely remember screaming in ecstasy. Part of going to Duke means being everyone’s enemy.

As a Heels fan who took a disgusting amount of joy in Duke’s Mercer loss, I also remember the last game the team played against UNC. Hood dropped 24 points, while Jabari had 30, and the two dominated the Heels for 40 minutes. There was no ecstasy for haters that night. 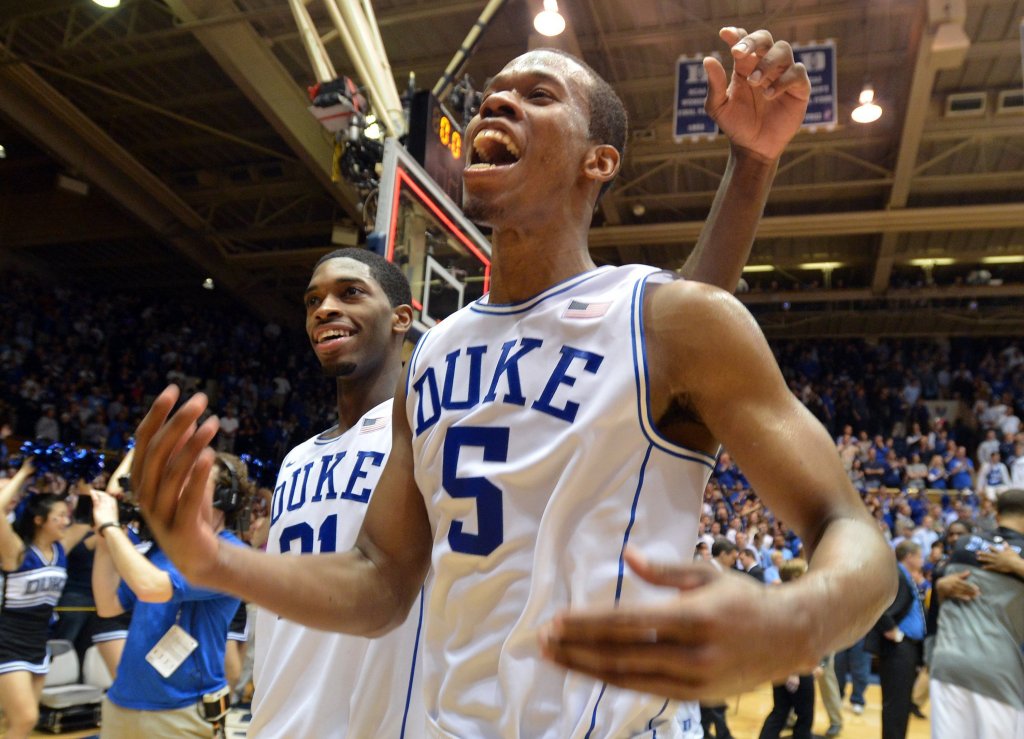 Now it’s about the NBA. Hood can score from the perimeter, his midrange game is solid, and wherever he goes, he’s talented enough right now to help a team off the bench. He projects as a small forward who could also slide to guard or play point-forward in spots. The Jalen comparisons will keep coming, especially if his ballhandling gets better.

Playing next to Jabari may have meant sacrificing the spotlight last year, but it also gave NBA scouts a preview of exactly the kind of role he’ll play in the NBA. He won’t be a superstar, but he can be deadly as a catch-and-shoot wing who complements his teammates.

Most mock drafts have Hood going somewhere between the end of the lottery and the 21st pick to the Thunder, which means he’ll likely end up on a playoff team. He’ll have to get in better shape if he’s going to hold up on defense at the next level, but the combination of his size and shooting should make him a weapon in the right situation.

It helps that he chose a different path than most of the Mississippi guys who came before him. “If I went after my freshman year or the year I sat out,” Hood says, “I would’ve made a team, but I wouldn’t have been the player that I am now. Being stronger, knowing more about the game. I’m 21 years old and I’m ready to go in and make an impact.”

For now, he’s working. I wanted to know how he’ll celebrate as the draft gets closer, and he said he hadn’t thought about it. He’s working out until a few days before next Thursday.

He spent the last few months at IMG Academy in Florida, basically going through a basketball version of two-a-days.

“Seven-thirty to five, every single day. Getting up, eating breakfast, lifting weights, going outside on the turf, doing movement and agilities and things like that. Then I take a little break to eat lunch and come back to work out again.”

Keep in mind that outdoor workouts in Bradenton, Florida, happen in 90-degree heat with god knows how much humidity.

“It humbles you a little bit,” laughs Hood. “The only thing is you don’t have class now, so that makes it a little bit easier. But it’s really intense. We’re getting ready.”

So why are we talking about Rodney Hood right now?

Because this draft is starting to feel like those Duke games.

Everyone’s focusing on the superstars at the top, but it’s the guys in the middle that really make this exciting. Guys like Gary Harris, Dario Saric, Nik Stauskas, T.J. Warren, Kyle Anderson, Glenn Robinson III, Tyler Ennis, Elfrid Payton, P.J. Hairston, Zach LaVine, James Young. And Hood. Most years these players would have had enough potential to be lottery picks, and some of them still will be this year. But there are so many big names at the top that a lot of them will get pushed down, putting them on much better teams.

I think we’ve tempered our expectations for guys like Andrew Wiggins or Jabari or Marcus Smart this year, but if we’re not getting as many franchise-saving players at the top, we’re getting a ridiculous number of guys who can inject life into teams that are already good. That’s what Hood can do. That’s why this draft is so exciting, regardless of what happens with Joel Embiid.

Hearing Hood’s story will also remind you why any draft is so cool: Every player getting ready for next Thursday has his own winding journey, his own insane workout regimen, his own state tradition to live up to. If you pay attention to the backstories on draft night, at least for one night, it becomes impossible to root against any of these guys.

We’ll spend a lot of the next week nitpicking the best players, and some people will tell you why this draft isn’t as great as you’ve heard, or why someone can’t be a superstar, or who can’t hang on defense. But whether the top of this draft lives up to the hype, just remember that this year’s class is full of Rodney Hoods.