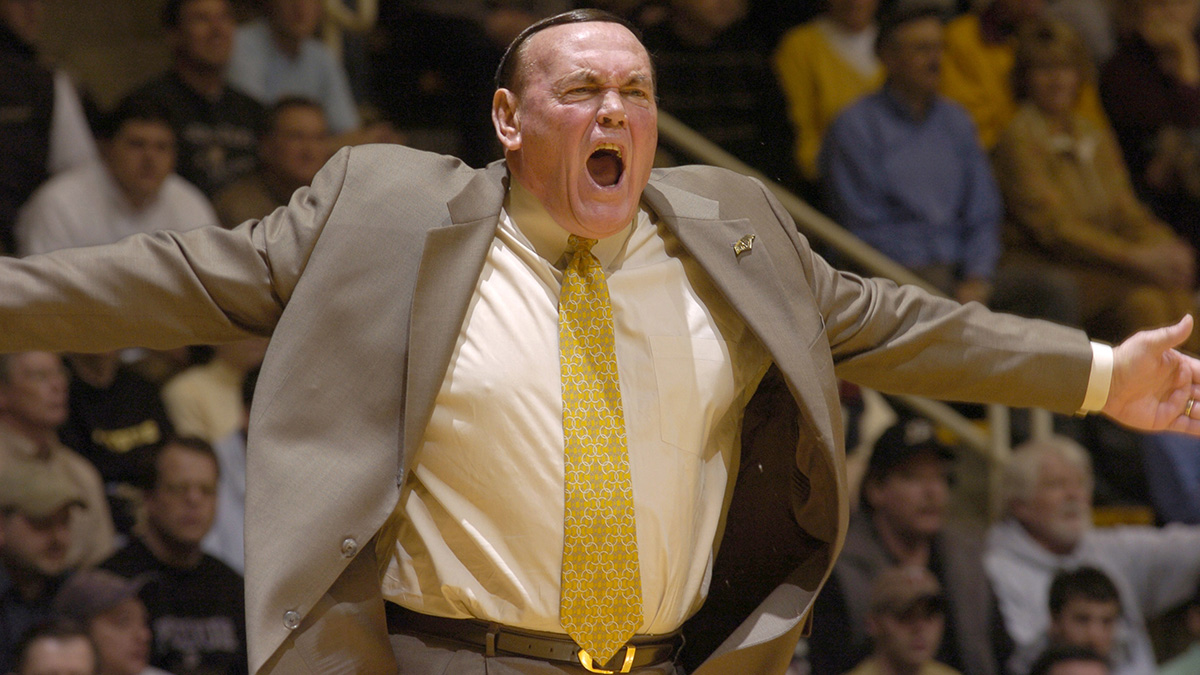 I grew up in the west suburbs of Indianapolis, an hour south of Purdue University and an hour north of Indiana University. My mother was a two-time basketball MVP at Purdue and my father was college roommates with Indiana basketball star Butch Carter.1 My brother graduated from Indiana and my sister graduated from IUPUI, a university in Indianapolis that was created by combining resources from Indiana and Purdue. It’s fair to say the rivalry between the Hoosiers and Boilermakers has played a significant role in my life.

And yet, despite being a basketball junkie who was raised on this rivalry, I had never seen an Indiana vs. Purdue basketball game in person. So the pitch to Grantland was simple: Send me to West Lafayette for my first game between the Boilers and Hoosiers, and let’s start a series about overlooked college basketball rivalries. It was admittedly just a ploy to take in my first IU-Purdue game, but it worked.

With that, here’s your crash course in the Indiana-Purdue rivalry.

Why Is This a Rivalry? 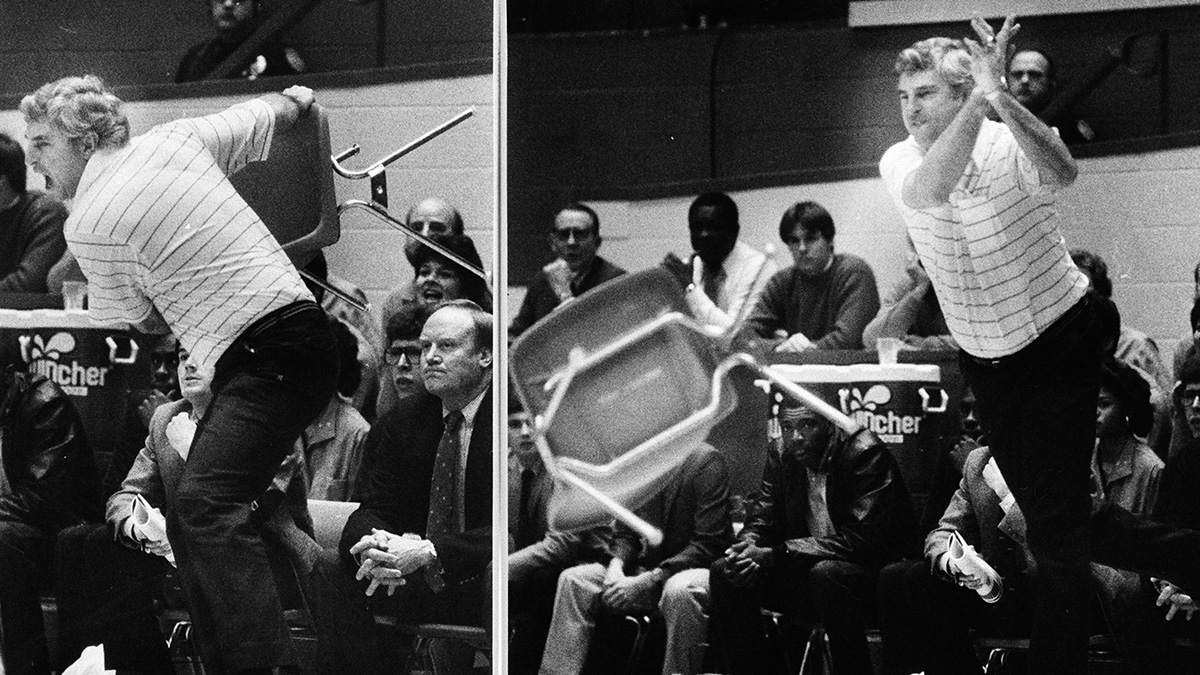 Indiana and Purdue are the biggest public universities in the state. Beyond that, the rivalry represents blue-collar (Purdue) vs. white-collar (IU). It’s engineering and agriculture (Purdue) vs. medicine and business (IU). It’s conservative (Purdue) vs. liberal (IU). Purdue is in northern Indiana, where cornfields, meth labs, and dying Rust Belt towns weave together to create the place rednecks call home. IU is in southern Indiana, where cornfields, meth labs, and rolling forests weave together to create the place hillbillies call home. Purdue fans pride themselves on being lunch-pail types who earn what they get and basically embody Aaron Tippin songs. IU fans will tell you they’re more sophisticated — right before they bong a sixer of beer in their underwear at 8 a.m. on a Tuesday because “it’s Little 5 week.”

Oh, and let’s not forget the basketball. Basketball in Indiana, as you may have heard, is pretty important. To this day, high school games between small farm towns draw thousands of spectators. Even the people in the state who don’t like basketball still like basketball. They have to. The history of the sport in Indiana gets romanticized so much that basketball has become more than just a game — it’s part of the culture. If you live in Indiana and don’t know the names Knight, Keady, Bird, Wooden, Robertson, Plump, and Hinkle, you may as well be from Mars.

Thanks to this obsession with the game, nowhere on earth produces as much basketball talent per capita as the state of Indiana. And when all of these players finish beating the hell out of each other in high school, they pick between IU and Purdue and beat the hell out of each other in college. As a result, IU and Purdue are basically all-star teams made up of the best players in the best basketball state in America, all of whom know each other well thanks to years of playing against one another in high school. Plenty of guys go out of state (or to Notre Dame, Butler, etc.) and both schools certainly recruit all over the country, so it doesn’t exactly work this way. But this is how the seeds of the rivalry were planted.

Indiana fans want everyone to know that the only reason Purdue has the series lead is because the Boilers were so dominant in the early days of the rivalry. Purdue fans want everyone to know that Purdue won the lone NCAA tournament game between the two in 1980. They would also like you to know how hilarious Indiana fans’ lack of self-awareness has to be to insult Purdue fans for living in the past.

Indiana fans want everyone to know that Purdue’s national title comes with an asterisk because it was won in 1932, seven years before the start of the NCAA tournament. Purdue fans would like to defend themselves, but every time they try, Indiana fans cut them off by yelling, “BANNERS!”

Five Videos That Encapsulate the Rivalry

There’s the “IU sucks” chant that Purdue fans do every game, regardless of opponent. Here’s what it sounds like when Indiana is playing in Mackey Arena.

There’s the time in 1981 when Bob Knight invited Purdue athletic director George King to appear on Knight’s TV show after Indiana played at Purdue and Knight’s wife was verbally attacked by Purdue fans. King declined, so Knight brought a donkey wearing a Purdue hat onto his set, referred to it as a jackass, and claimed it was a representative of Purdue.

There was the time in 1997 when Chad Austin hit a game winner with 0.6 seconds left in overtime to beat Indiana in Bloomington in what remains the best Indiana-Purdue game I’ve ever seen.

There was the time in 1991 when Knight yelled at his players during a practice before the Purdue game. Someone — supposedly former Nets coach Lawrence Frank, who was a manager for the team — recorded it. (If the words “Knight” and “yelled” didn’t already make it obvious, this has super-NSFW language.)

And, of course, there was the time in 1985 when Knight provided the most famous moment in the rivalry’s history, as well as possibly the most famous coaching outburst in the history of sports. 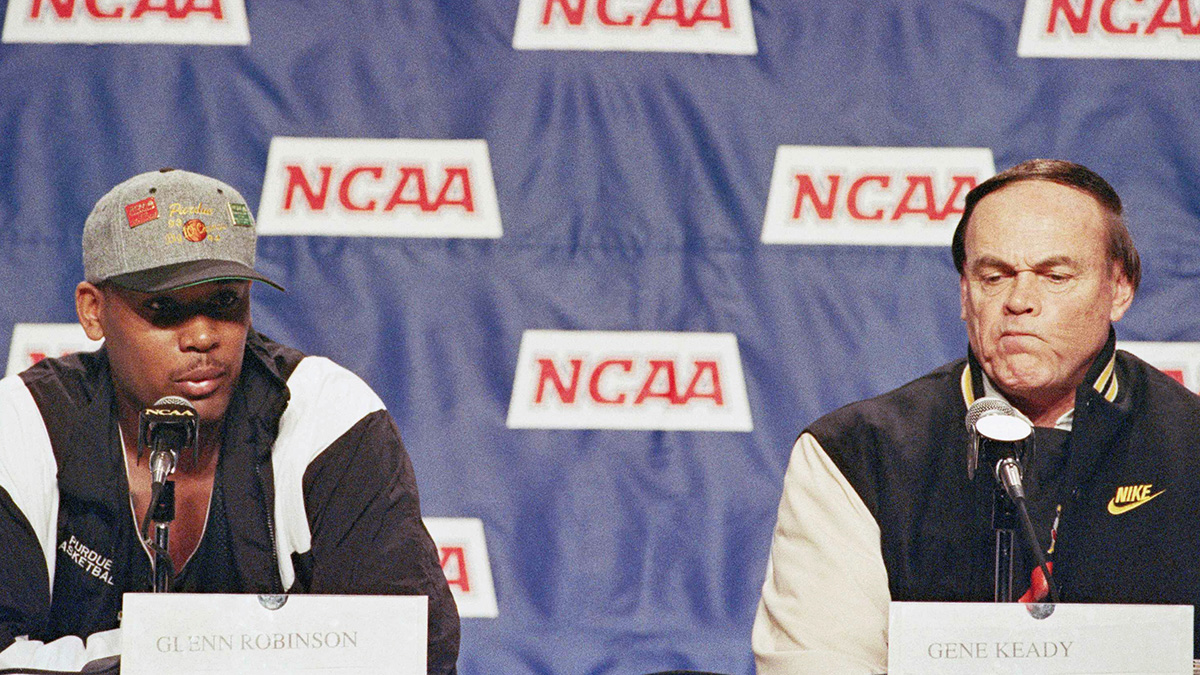 Best Indiana player to transfer from the program: Larry Bird

Best Purdue player to transfer from the program: Kyle Macy

Indiana’s is better, but what does that really mean? Isn’t “better” in this case really worse?

On a Scale From 1 to 10, How Relevant Is the Rivalry on the National Stage?

Probably a 4. Games in which both teams are ranked have been rare in the last decade, making the rivalry not exactly must-see TV. Each fan base is split on the job their head coach is doing, thanks in large part to last season being the first since 1970 that both Indiana and Purdue missed out on the NCAA tournament and the NIT in the same year. It’s been 13 years since either team advanced past the Sweet 16. The last nine games between these teams have had an average margin of victory of 19 points. This season, Indiana lost at home to Eastern Washington while Purdue lost at home to North Florida and Gardner-Webb.

That said, both teams have won a Big Ten title in the past five years and both programs are perennial NCAA tournament participants. Maybe the outcome of this game doesn’t shake up the top-10 rankings, but it’s disingenuous to call both programs awful and the rivalry meaningless.

How Relevant Is It Historically? 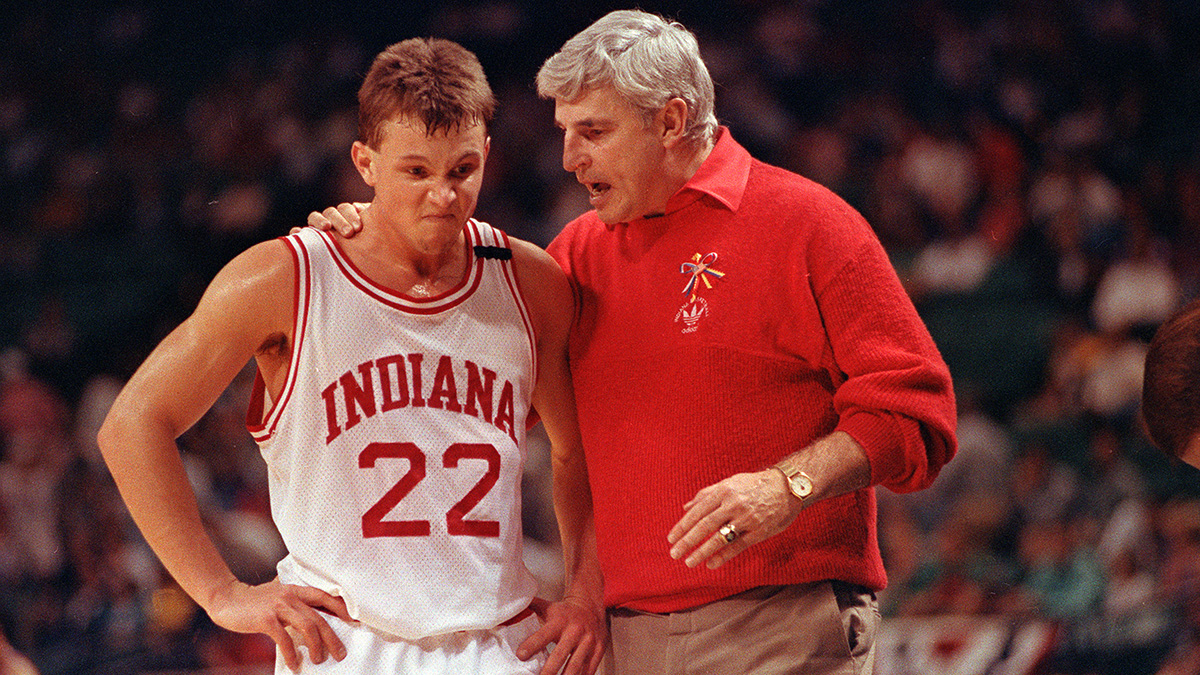 Chuck Burton/AP
I give it an 8 out of 10. Take away Duke–North Carolina and this stacks up with any rivalry in America. The three best coaches in the history of the sport have participated in the rivalry.2 More than 200 games have been played over 114 years. Purdue has the most Big Ten regular-season conference titles with 22. Indiana is second with 21. There have been 40 consensus All-Americans between them, including four national players of the year. I could throw numbers at you all day. Instead, I’ll just leave it at this: The Big Ten has historically been one of the best basketball conferences in America, and Indiana and Purdue are the two best programs in Big Ten history.

And it goes without saying that the hatred between the fan bases is real. Indiana fans think of Purdue more as a little brother than a true rival, since Purdue doesn’t have a great history of NCAA tournament success.3This lack of respect drives Purdue fans crazy, which is why they’ve made it their sworn duty in life to see Indiana burn to the ground. And the vitriol from Purdue fans annoys Indiana fans so much that they want Purdue to burn to the ground just to shut up the Boilermakers fans.

January 31, 1981 – February 29, 2000. This was the duration of Bob Knight vs. Gene Keady, which turned the rivalry from a couple of good programs playing each other into must-see TV. The two coached against each other 41 times, with Keady winning 21 and Knight winning 20. Indiana won two national titles in that span (1981 and 1987) and made another Final Four (1992). Purdue won three consecutive outright Big Ten titles from 1994 to 1996, something that has been done only one other time in Big Ten history.4 Indiana and Purdue combined for 12 Big Ten titles (six apiece) and six Big Ten players of the year during this span. It was during this era that Knight threw the chair, put the donkey on TV, and unleashed his infamous tirade. And it was during this era that Keady spent $600 a week on his comb-over. Knight was eventually fired in 2000 for violating a zero-tolerance policy established after he tried to massage the neck of one of his players in practice. (Or maybe he was choking him. You decide for yourself.) The rivalry hasn’t been the same since. 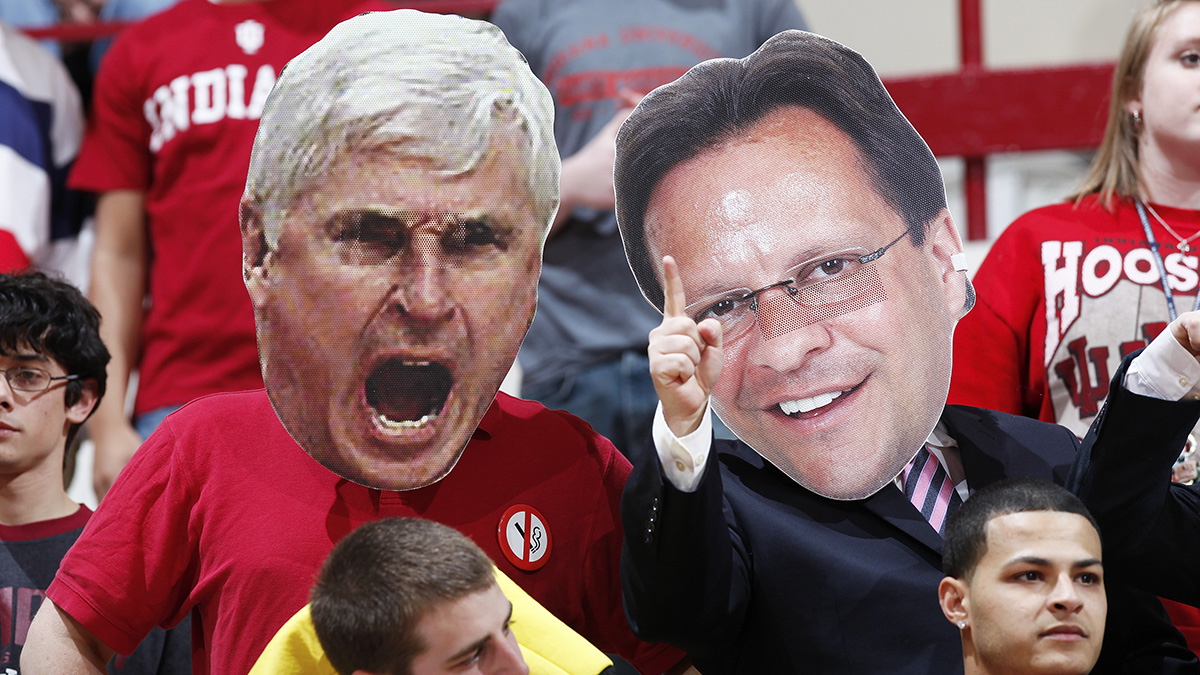 Kayfabe is a term used in professional wrestling to describe the suspension of disbelief and acceptance that what is playing out in front of the audience is 100 percent genuine. In other words, to stay true to kayfabe is to believe that Stone Cold could really kick his boss in the nuts on national TV every week and still keep his job. Well, in kayfabe, Purdue fans hate Tom Crean because he’s Indiana’s coach and hating everything Indiana is what it means to be a Purdue fan. Indiana fans hate Matt Painter for the same reason. In truth, Purdue fans hope Indiana never fires Crean and Indiana fans hope Painter signs a 50-year contract extension this summer. That’s all you really need to know about the current state of the rivalry.

How to Make It As a Mid-Major: Wichita State and Northern Iowa’s Game of the Weekend