Requiem for a Dump: Saying Good-bye to the Nassau Coliseum on the Occasion of Rangers-Islanders 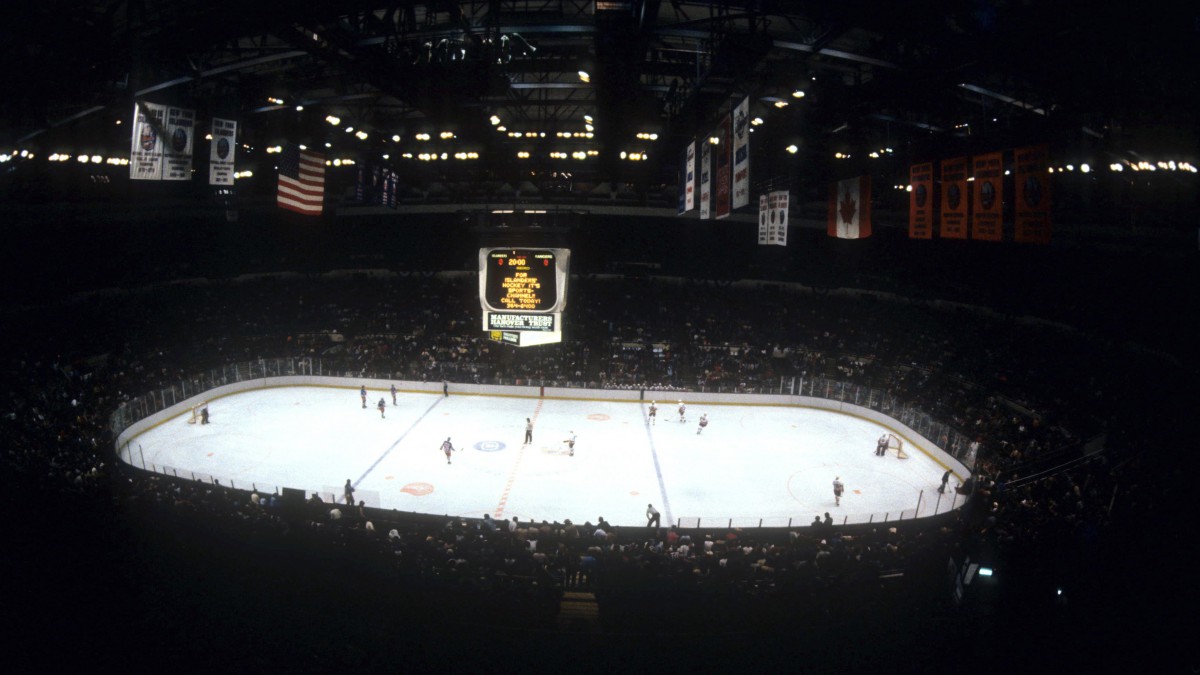 Nassau Veterans Memorial Coliseum, home of the New York Islanders, is a mosquito trapped in amber. It is a cryogenically frozen head. It is a dead ancient Egyptian ruler impeccably preserved in rags.

To step inside the concourse is to enter what seems like a movie set or museum. The floors are dirty and the walls are thickly painted, as if to conceal structural horrors beneath. The roof drips and the seats are stained and mismatched — one fan told me that he jumped out of his chair to cheer a goal once, and the entire thing basically disintegrated beneath him — and the narrow hallway that leads to the ramshackle private suites has the claustrophobic, carpeted ambience of an airport jetway. The food court is in a windowless basement and is as cheery as the lower level of a slated-for-implosion mall. The “beer gardens” have a porta-potty-to-picnic-table ratio of roughly 2-to-1. (A good thing, because the lines for the cramped concourse bathrooms are epic.) The Islanders’ home locker room is smaller than the intentionally cramped visitors’ quarters at most other arenas.

All this is why people, most notably WFAN’s Steve Somers, call the place “the Mausoleum.” It’s why Gary Bettman, in 2009, said: “I think it is clear, and I say this perhaps as a matter of observation, and as a matter of fact: There is probably no worse major league facility right now in North America than the Nassau Coliseum.”

It is also the most beautiful and perfect sporting arena I have ever been inside.

As the forecasts for a “crippling” and “historic” winter apocalypse accumulated on Monday like so many drifts of snow, there seemed to be zero chance that the Islanders and Rangers would be playing Tuesday night. The Coliseum can be tiresome to get to under even the sunniest skies. There’s no easy, one-shot mode of public transportation that deposits you precisely where you want to be — but in the middle of a snowstorm? Fuhgeddaboutit. My own trip out there on Monday afternoon involved two trains, a bus, and a lift from a sympathetic plow driver who spotted me struggling to wheel my suitcase through the Hempstead Turnpike snow.

But as school cancellations piled up and Governor Cuomo announced a total shutdown of New York subways and trains, the Islanders and Rangers stubbornly insisted that the show would go on as planned. And how could it not? This is a local hockey rivalry that no one wants to tamper with, especially right now. Rangers-Islanders has always been a noteworthy matchup, but it’s been forever since the two teams have simultaneously been this good.

The Rangers, who reached the Stanley Cup final last season, rebounded from a mediocre and injury-slowed start with a 16-5 run between the beginning of December and the All-Star break. The Islanders, meanwhile, have been one of the NHL’s top teams all year, led by a captain so talented that he tied the All-Star Game scoring record last weekend with four goals. (John Tavares somehow didn’t win MVP honors, though that may have been a good thing in terms of preserving family unity.)

All this has riled up fans of New York hockey; it’s hard not to daydream about the prospect of a Rangers-Islanders playoff series, which hasn’t taken place in more than 20 years. To look back at the history of the two franchises meeting in the postseason is to get a decent bird’s-eye view of their distant heights. The Islanders beat the Rangers three times in the playoffs in the early ’80s en route to winning three of their four straight Stanley Cups, while the Rangers defeated their Long Island counterparts in their own 1994 championship season. Despite what the marketing departments of the respective teams would like you to believe, all these glories took place a long, long time ago.

At Tuesday night’s game, Islanders fans, referring to the two wins they’ve already picked up against the Rangers this year at Madison Square Garden, mocked visiting fans with “You can’t beat us!” A few Blueshirts fans tried to retaliate — “You can’t get a Cup!” — but the taunt died down almost as soon as it began, with everyone remembering that they aren’t exactly ones to talk.

It has been a charmed season for the Islanders. The organization’s false starts and disappointments are legion, from the sale of the team to an outright fraud to the depressing career of former goalie Rick DiPietro to the even more depressing Alexei Yashin trade. But that began to change, albeit slowly, when the Islanders selected John Tavares in 2009 with the draft’s top pick.

Tavares was such a standout player that when he turned 14, the Canadian hockey federation granted a special exemption allowing him to be drafted into the Ontario Hockey League a year early. (It was the first case of “exceptional player status,” which has since been granted to three other boys.) A push was made to accelerate him into the NHL draft a year early as well, though that never did pan out. 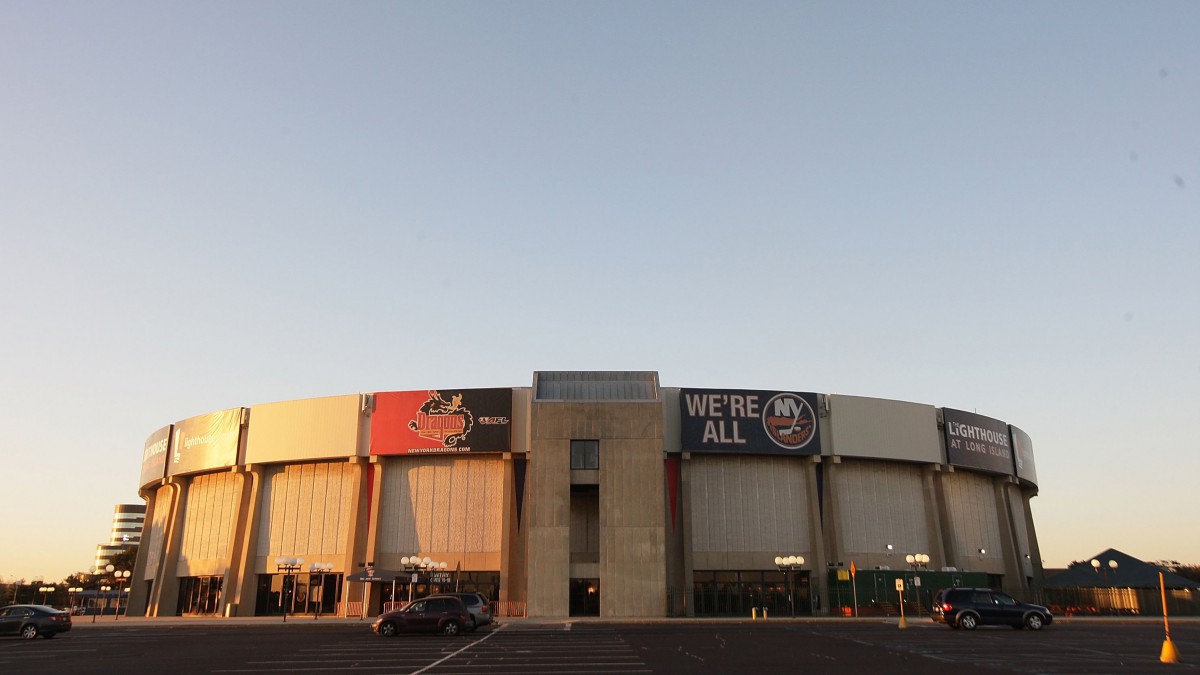 He joined an Islanders team that was clearly ailing but had made several strong draft picks in recent years, from forwards Kyle Okposo and Josh Bailey to defenseman Travis Hamonic. And he made an impact right away, finishing second in rookie scoring and lending a face to a franchise that sorely needed one. Finally in 2011, he made a decisive commitment to the Islanders, inking a six-year, $33 million contract a year before he needed to — despite the complete utter arena chaos and uncertainty then enveloping the team.

Owner Charles Wang’s ambitious if overreaching plans to turn the barren, ho-hum landscape surrounding Nassau Coliseum into a major mixed-use development were ultimately no match for the preening and labyrinthine realities of Long Island’s municipal politics. He was unable to push through a number of varying proposals to upgrade the Islanders’ crumbling arena. In the fall of 2012, he announced that the team would finally do what it had been threatened for years: move out of Uniondale, New York, the working-class suburban community that had for so long been the heart of the Islanders’ identity, right down to the team name.

The new location: Barclays Center in downtown Brooklyn, home of the Brooklyn Nets and an arena that is so not-optimized for watching hockey that the scoreboard will hang off-center over the ice and a good number of the seats can’t even see one goal. In contrast, you could say that at Nassau Coliseum there really isn’t a bad seat in the house. (Some may argue that’s because they’re all bad, but in all seriousness: Those intimate sight lines can’t be beat.) This is the last season the Islanders will play in their native land, amid their native people, and as with any farewell tour or last hurrah — Teemu Selanne, those last few weeks of college — there’s that desire to delay and deny the end for as long as anyone can.

Before Tuesday night’s game, Henrik Lundqvist said that he appreciated the Rangers support he hears when playing in the Coliseum; the stands are always infiltrated by Blueshirts on the occasion of Rangers-Islanders games. But between the snowstorm and the Islanders’ brilliant season, last night’s home team contingent — some of whom could be spotted tailgating over little fires in the icy parking lot — easily drowned out the rowdy Rangers fans.

The Islanders had received the nerve-racking news that Okposo, who is second only to Tavares in team scoring and is part of the Isles’ corps (and core) of “homegrown” players, would be out six to eight weeks with an injury. But the current iteration of the Islanders has blended these raised-in-the-system guys with a savvy mix of free agents and additions. Defensemen Johnny Boychuk and Nick Leddy, respective Cup winners in Boston and Chicago, were picked up to solidify the team’s blue line. Goaltender Jaroslav Halak was acquired after excelling in St. Louis. 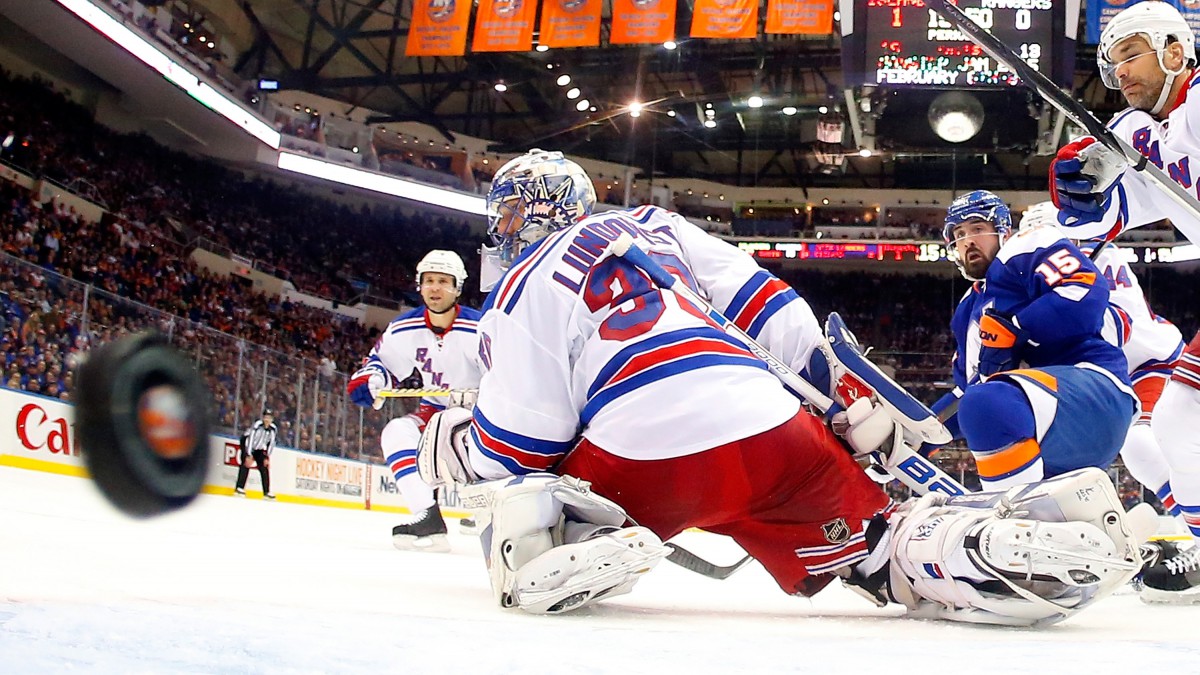 And so it was fitting that Mikhail Grabovski, the oft-maligned yet effective former Maple Leafs (and, briefly, Capitals) forward whom the Islanders acquired this offseason, would make his return from injury by filling in for Okposo. Grabovski’s first-period goal was like a brief capsule of the Islanders’ season: Tavares carried the puck up the ice and into the zone, newcomer Boychuk and 2008 Isles draft pick Bailey played tic-tac-toe, and Grabovski was there to tap it in.

Matt Martin extended the lead to 2-0 early in the second period when he netted a rebound past Lundqvist, and the Nassau crowd went bonkers. (My favorite fans, by the way, were a foursome of men from Denmark all wearing no. 51 for their countryman Frans Nielsen.) Ryan Strome was credited for a goal that deflected off Rangers captain Ryan McDonagh’s stick, and by the time Tavares scored his 22nd of the season on the power play to give the Islanders a 4-0 lead, I could see a few Rangers fans being escorted out of the stands by Coliseum security. One had on a Rod Gilbert jersey; the other was wearing a fur trapper hat.

Carl Hagelin’s goal with eight seconds left spoiled Halak’s deserving shutout — indeed, it was the Islanders goalie who had largely kept his team in the game, despite the lopsided score — but otherwise, it was a perfect evening for the Islanders fans who braved the roads to fill the building.

It’s impossible to hear the roar of the crowd at Nassau1 without trying to imagine what on earth the place must have been like back in the Islanders’ dynasty days of the early 1980s. (With that electric-guitar-heavy goal song they’ve got going on, you don’t have to try too hard.) An usher I spoke with told me that recently some fans in his section were chirped for wearing brand-new jerseys during a Devils game. He said that made him happy: Islanders fans have been waiting forever to be accused of being bandwagon jumpers. That old vehicle’s been languishing in the shop for years.

It’s bittersweet, and just so Islanders, that the embattled team’s brightest and most fun season in ages is also, in some respects, its last. Sure, the players will love the cushier digs at Barclays Center, and the fans probably won’t mind having actual options for where to grab a drink before a game. A new generation of Islanders supporters will be born. (Their names might all be Liam and Olivia.)

But the number of truly distinct places like Nassau Coliseum in professional sports has long been dwindling down to nothing — in the NHL, only Edmonton and Detroit have rinks of similar feel and vintage, and those aren’t long for the world — and there’s something to be said for the place’s intoxicating cocktail of inertia and proud identity. I’m a Rangers fan, for crying out loud, and I still left the game hoping against hope that the last time the Islanders skate off the ice at Nassau Coliseum, it’s with a Stanley Cup. And as the Islanders gathered at center ice to salute the fans after the game, the song “On to the Next One” blared from the PA system. That will be the case soon enough. Sitting there in my rickety seat, though, it was hard not to feel that it shouldn’t happen just yet.

NBA Shootaround: Prince of the City