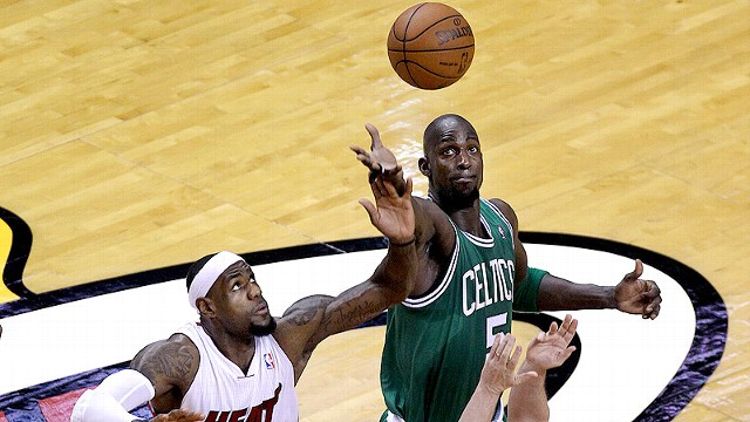 I’ve heard it from a few NBA players over the last couple of years: The plays and rotations a team uses in Game 1 will be long scrapped by playoff time. Tonight is a big night, with one glamour matchup, but it’s also just the first in a long journey of experiments, failures, discovery, and injury luck that will take a million little twists. Still, that glamour matchup provides an interesting window into the current state of a defending champion that made itself over on the fly during the playoffs, and one would-be contender that did so by working the intricacies of the cap in a brilliant offseason. That Boston reloaded with Miami specifically in mind makes the matchup even more intriguing. Five things to watch:

This is really the only thing that matters, perhaps even more so than the result of the game. Right from the announcement of the starting lineups, we get to see how committed Miami is to a position-less version of small ball with LeBron James at power forward, and how aggressively Boston will adjust its own rotation to account for it. The Heat will likely start the lineup that saved their season in May and June — Mario Chalmers, Dwyane Wade, Chris Bosh, LeBron James, and Shane Battier.

Boston could counter by sticking with its usual alignment — Brandon Bass and Kevin Garnett in a semi-traditional frontcourt — or by slotting Jared Sullinger in Bass’s spot, or even by starting small from the get-go with Jeff Green at power forward (very unlikely).

The questions only get more interesting from there: How often, and when during the game, will Erik Spoelstra play two big men together? How will Mike Miller and Ray Allen fit into Miami’s rotation, and, in a connected question, how long will Spoelstra go without a traditional point guard/little guy (Chalmers or Norris Cole) on the court? Where the heck does Rashard Lewis fit in — as part of LeBron-LewisÓBig Man X frontcourts, or in lineups that don’t include James?

On the other side, Doc Rivers gets to unveil Boston’s new versatility. A team that tried to beat Miami and Philadelphia with small lineups including both Mickael Pietrus and Keyon Dooling now gets to run out Green at power forward and an army of shooting guards that is still pretty formidable even without Avery Bradley. One of the new guys, Jason Terry, will have to be Boston’s de facto backup point guard for now, and it will be interesting to see how Rivers handles the Wade assignment when Terry and Rajon Rondo are the only two guards out there — if that ever happens. We’ll likely see a super-big wing pairing of Green and Paul Pierce, and perhaps even all three of Rondo, Terry, and Courtney Lee on the floor together.

We’ll get our first idea of Sullinger’s place in Boston’s rotation, and whether there is any role for plodders Jason Collins and Darko Milicic against the Miami speedsters.

Again: The answers tonight will be preliminary. But they’re the first answers we get.

Spoelstra is talking for the second straight year about pushing the pace to new levels, something that might be easier this season with only one big man on the floor and Allen trailing fast breaks as the league’s most terrifying pitch-back option. (R.I.P., the Rondo-to-Allen shovel pass.) Miami came flying out of the gates last season, averaging 99 possessions per game in their first 10 games, a number that would have easily led the league, and forcing turnovers at an astronomical rate. They slowed down as the season went on, but if they come out tonight with the same commitment to “pace and space” as they showed early last season, they’ll test Boston’s improved team speed and stated goal of eliminating a years-long turnover bugaboo.

Ray Allen isn’t here anymore to run side-to-side around a series of picks, and though both Lee and Terry can operate that way, that’s more Allen’s bread and butter. How will Boston create spacing now, especially when something other than the elite-shooting Garnett-Bass combination is on the floor? Terry will run some pick-and-rolls and set pesky screens away from the ball, as he always did in Dallas, and Boston could create some killer shooting lineups when Terry, Garnett, and Bass are on the court. The Celtics are optimistic about both Sullinger’s pick-and-pop game and post skills; will he get a chance to show the latter tonight against smaller Miami defenders?

We’ve long known Boston likes Green as a post-up option when he’s at small forward, but they also ran a lot of pick-and-rolls for him at the elbow area in the preseason. Will that carry over now that the games count?

In general, Boston has just looked zippier on offense. Lee and Green especially bring speed and a willingness to move both the ball and themselves efficiently around the floor; both are capable of running an impromptu side pick-and-roll in a pinch, and at least advancing the offensive flow. Building at least a league-average offense is Boston’s most important task this season, and they get to test themselves right away against one of the league’s savviest, most athletic defenses.

All indications are that Bosh will continue the evolution he promised before the start of last season and finally executed in the playoffs, when he shot 7-of-13 from deep and attempted one 3 per game. He looked especially comfortable from the corners, opening up new options for those sets Miami loves to run based around screening action in each corner. If Bosh emerges as a reliable 35-to-40 percent 3-point shooter with decent volume, the Heat will have found an important new weapon.

5. The Pounding of LeBron and Battier

Playing smaller means sacrificing for these two guys in a league that, for all the (justified) focus on the evolution of positions, still features four traditional bigs on the court at once during most NBA games. Battier spared LeBron some of the physical pounding that comes with playing small, banging with David West, Serge Ibaka, and other bigs during the postseason. (James did a lot of this as well.) Battier is 34 and immensely important to Miami; no one else on the roster outside the star trio is capable of defending both forward positions, especially if Lewis’s game continues to rapidly decline. Can his body hold up again over a full season? And if he’s aching, can Spoelstra avoid overtaxing James during the full 82?

James will surely post up more this season after increasing his number of post-ups last season and finally going HAM on the block during the Finals. But Spoelstra may want to ration those post-up plays, especially if James is battling a physical defender. James’s post-ups aren’t based as much upon brutal physical force as they are around his quickness and passing smarts, but they are still tiring. Spoelstra is a smart coach and understands the importance of monitoring minutes and bodies. But tonight’s the opener, and LeBron might want to come out with a bang.