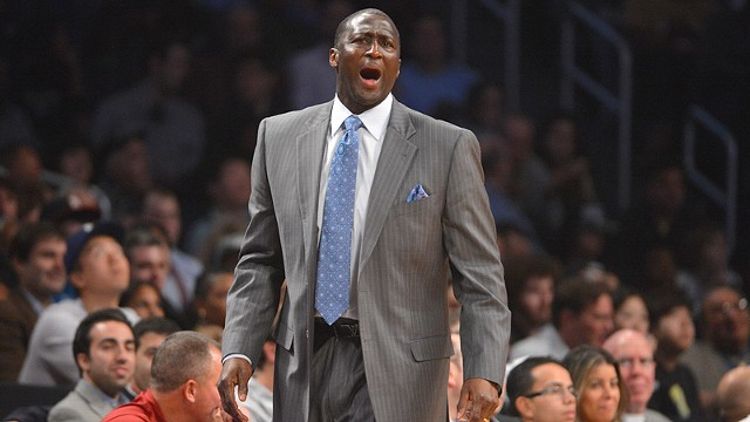 The Jazz look to be settling in as a solid bottom-four playoff seed in the Western Conference, though with Golden State off to a surprising 17-8 start, making the playoffs at all is no guarantee for the incumbent No. 8 seed. Utah is 14-12 after an exciting road win last night in Brooklyn. Before the game, head coach Tyrone Corbin huddled up for an extended one-on-one with Grantland about Utah’s rotation, its two big impending free agents, his computer-science degree, and lots of other stuff. Below, an edited transcript of our chat.

I love the big lineup, with Paul Millsap at small forward, if only because it’s different from what most teams do. We haven’t seen it since [Derrick] Favors’s foot issues started popping up. Are you going to bring it back?

Yeah, we’ll have it in the bag when the time presents itself. We’ve gotta make sure the matchups are correct. At some point, though, we’d like to use it to force our will on other teams.

It sounds like, at this point, you’re not comfortable with it as an arrangement you can use every night. I remember before Derrick’s injury, you broke it out against Toronto when they had [Linas] Kleiza at the three, and then Boston, when the Celtics had [Jeff] Green there — in other words, when opponents had “big” small forwards.

For the most part, yes, against bigger threes. At times, we’ve felt we put Paul [Millsap] in a bad position with that lineup. We tried to start it for a bit, and it kind of threw him off. It takes him out of his comfort level.

What are the specific issues? I’d imagine some if it is spacing on offense, and some of it is Millsap having to guard some quick wing players with range.

Click here for all of our interviews with fascinating people from the worlds of sports and pop culture.
It’s all of that. For us, the spacing can be tough, because Derrick, Paul, and Al [Jefferson] are all inside guys first. It takes Paul a while to get used to playing [small forward] and spacing out toward the perimeter. I felt at the beginning of games we put him in a bad spot at times. But we can use it during the course of the game.

Favors plays a lot more with Jefferson than with Millsap this season. Why?

So Al can guard the bigger centers, you mean?

Yeah. Because it’s not just about size. It’s about experience playing a guy, and knowing how to put your body on a guy. But at times, we’d like to be able to use Paul and Derrick, to grow into a quicker unit, to give us some more speed at times. We’ll look to grow into that as we go forward.

Interesting. I always imagined the reason for playing Favors and Jefferson was the idea that Favors could cover for Al a bit on defense, because Al’s not a great pick-and-roll defender. But maybe I’m misreading that.

Well, I think Al’s gotten better. But we look at it not just defensively, but from what does the other team’s center present on offense? If he’s a big, banging five that’s down low the whole time, we need a bigger body on him. And Derrick is capable, at times, of playing bigger guys. He’s getting better at using his quickness. He may not have the size to really pin a guy, but he has the quickness to get around him.

It’s funny — Derrick looks huge, but you’re talking about him like he doesn’t play that big. Zach Randolph gave him some problems the other night in the post.

I mean, one of the things with young guys is experience, especially when you’re going up against veteran guys. You take a guy like Z-Bo — his footwork is impeccable, and he knows how to get quicker guys in foul trouble. You need to grow into that in this league, unless you have the luxury of just putting a guy in there and letting him learn a lesson on the run. Well, we’re in a different spot. We need to make sure we have a chance to win the game.

You guys are in an interesting spot. You know the deal — Al and Paul are going to be free agents, and the trade rumors are going to ramp up. But at the same time, this is a pretty good team. Have you talked to the front office about possible trades, or about keeping the team together to see how good this group could be?

Front office talk is front office talk. We don’t want to share that with anybody. We knew coming into the year we had a lot of free agents, and it’s there. We can’t do anything about it now. The guys have been great. They’re just playing, and trying not to have that on their mind the entire time. When they’re playing well, it’s good, but when they’re not playing well, it’s more on their mind, because they’re thinking about other things.

And throw Alec Burks in there, too. We can’t even find time for him, because we’re trying to find guys minutes so they can get in a rhythm. It’s matchups some nights, and it’s how we’re playing on some nights. It’s another area where want to grow to where we force our will on teams, and not make adjustments to what other teams [are] doing all the time. And Alec Burks deserves more time.

You know the Jazz bloggers are harping on that every day, right? Fans love to see what they have in young players.

[Laughs]. Oh, yeah, they are. And he’s one young player who can play. He’s worked his tail off, and I’ve told him, “Just hang in there.”

Gordon Hayward’s pick-and-roll numbers are ugly, but he looks like he should be a good pick-and-roll guy out on the wing. What’s missing right now?

He’s such a versatile player, and as he grows into it, one area where he’ll grow is forcing defenders to make a decision — not taking what they give him, but taking what he wants.

You mean, in terms of which direction he goes off the pick when a defense is trying to force him one way?

Sure, which direction to go, how to attack so you’re not just stringing the play out. And never taking just one dribble, and stopping and freezing, because then you play into the hands of the defense. He’s getting better. It’s just a process. He’s such a versatile guy, and we want to put the ball in his hands and let him make plays, especially with our second group.

You mentioned the second groups: You like to have five subs on the floor at once, but those units are struggling to score again this season. Is that something you think you’ll ditch if the numbers don’t come up to where they need to be?

Well, yeah, but you have to look at where we are now, and that’s building to see where we’re at during the beginning of the season, the middle of the season, and the end of the season — to see what you can use down the road. At times, having five subs on the floor without a starter to carry the load, we’ve really struggled. But at times, we’ve done well, and our defense picks up.

DeMarre Carroll goes out there and just does crazy things. He’s all chaos.

And we get a lot of transition baskets as a result of that. What will be the balance going forward? We’ll have to wait and see what that is.

What are you looking for from Al in pick-and-roll defense? I’ve taken a lot of shots at that part of his game, but I’ve never asked you straight out what you’re actually asking of him.

It has changed, but whatever scheme we’re in, he needs to be there early and aggressively. If we want him to jump all the way out and attack the ball handler, he needs to do that and get back inside to his man. If we’re asking him to drop back and stay below the ball, he needs to get up a little bit more and be aggressive so the point guard doesn’t get a running start on him. So to be up there early, and aggressive, so we can stop penetration.

Yeah, that’s the screen and re-screen. It’s tough. And that’s why teams do it, especially when their guards are looking to score. You can do a good job on that first screen, but that second screen is where they get the advantage a lot of times.

Why do the Jazz always foul so much? It has been going on, literally, for decades. Is it part of Jazz culture and Jerry Sloan culture just to beat the hell out of the other team?

[Laughing]. Well, we don’t foul just to foul. It’s just a part of the game. We want to be aggressive, especially on the defensive end. When Coach [Sloan] played, he played with an aggressive style. When I first came into the league, I was an aggressive, defensive-minded, tough-nosed, keep-your-hands-on-guys player. But the game has changed some, and you have to make adjustments. We don’t want to foul guys and be in the penalty a lot, but we want to make sure they know they’re playing against the Jazz.

You were a computer science major at DePaul.

Many, many moons ago.

I’ve heard that’s because you never expected to make the NBA and were prepping for a job in that field. Did you have an internship or anything like that? Did you have a job lined up? What did you want to do?

I had an internship with IBM in Chicago my junior year. I was looking forward to having an opportunity to work in the business world somewhere. My mom always made sure I understood this: What can you control? And I could control learning to get a job. That’s why I went to school with the intention of graduating in four years and getting a job in a major market in computer science. That, I could control. The basketball stuff — you work, you play hard, and if it happens, you’re presented with an opportunity, which I was blessed to be able to have. But I could control getting an education, and I was prepared to get into the workforce.