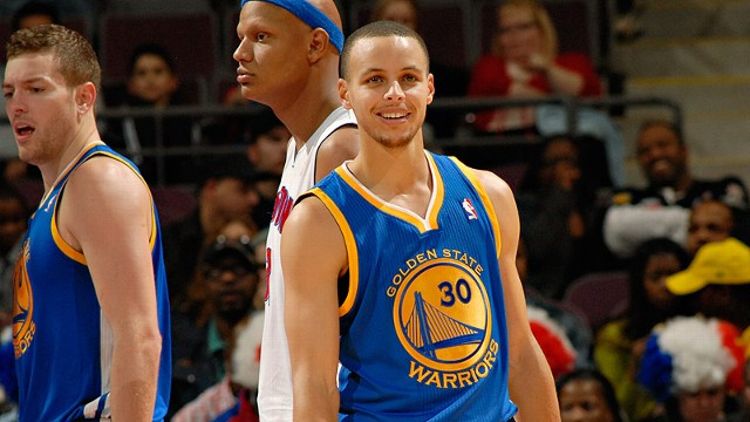 The Warriors entered the weekend having won five of seven to run their record to 11-7 — better than expected, given Andrew Bogut’s absence, Brandon Rush’s crushing injury, cold starts for Stephen Curry and Klay Thompson, and a point differential very close to zero. Curry had run off four straight 20-10 games entering Friday’s tester in Brooklyn, and both he and the Warriors passed that test with a solid seven-point win against a team that fancies themselves a contender (though one missing Brook Lopez). They won again the next night against the sad Wizards, and Golden State now sits at 13-7 as they enter the tougher half of a seven-game road trip. They’re only +11 through 20 games, so they project as closer to a .500 team than 13-7. Still: Golden State has earned this record with an improved defense and an offense that has started to right itself.

Curry sat down for a one-on-one with Grantland before the Nets game to discuss that defense, his determination to get in the lane more, his ankle issues, and lots of other stuff. Here’s an edited transcript of our chat:

You’re spending more time in the lane this season, drawing more fouls and trying to set up teammates for better shots. I assume that was a goal with Monta Ellis gone, right? How do you prepare for that kind of change and all the contact that comes with it?

Click here for all of our interviews with fascinating people from the worlds of sports and pop culture.
Yeah, you gotta have guys that can get into the paint and collapse the defense, because it frees up our shooters all over the court. A lot of teams teach keeping guys out of the middle, so if you can do that, you’re breaking down the defense. I still have to use my outside shot, but I have to get in the lane as a point guard and be able to distribute.

How do you practice taking contact and still making a play?

I was going against Jarrett Jack all of training camp. He’s a physical guard. He forces you to use screen and angles. And you’re ball-handling — making sure when you get in there, you actually have control of the ball, and that you can make different moves. You have to work on that every single day.

Was the ankle a worry, in terms of getting in traffic more, jumping in crowds?

You gotta block it out, because you can’t have any hesitation. It took awhile to get to that point. [David Lee interjects with a shout from across the locker room: “Thanks for reminding him!”] Only one time I got in trouble in Dallas — I tried to take contact at the rim and came down on a guy’s foot, but those situations are going to happen. You can’t worry about it too much.

This is a dumb question, but were you worried about your career at any point?

I was never worried about my career. It was just frustrating, going through the same situation over and over again, having two surgeries. Pretty much every single day, that’s all I thought about. I knew I would make a full recovery. I just wanted to get it expedited as much as I could.

You guys have remade your defense this season, in terms of your philosophy, how you defend pick-and-rolls, and that kind of thing. How has that adjustment been for you? Was that just a case of, you walk into training camp and the coaches tell you: “This is how it’s going to be”?

Over the summer, we talked about different defensive schemes we were going to have to implement. It’s more just about consistency. Whatever we do, everyone has to be on the same page. You have to preach it over and over, and work it and drill in practice. We’re getting better at it. Everybody’s on a string. In the past, it’s kinda been a shamble defense, where one night we down [send pick-and-rolls toward the sideline], one night we blitz [have a big man rush out at a point guard], and we never really got good at one thing.

What was your reaction when Coach Jackson called you an “elite defender”?

[Laughing.] I’ve never been called that before. I like to get in passing lanes and use my hands, and kind of be a pest out there. Containing the ball is a nightly challenge. There’s a lot of great point guards and a lot of quicker guys than me. They might have the speed advantage over me, but you just have to play the right angles and use your basketball IQ.

You’re supposed to get between your guy and the screener a lot of times on pick-and-rolls, right? To sort of force the point guard away from the pick?

That is physical, right? Some fans don’t see that.

Oh, for sure. You gotta put your body on those big guys and have contact the whole time. Obviously, they’re 6-9, 260 pounds, or however big. Really big guys, and they’re setting screens. You gotta take that contact and not die on the screens.

Why do you guys foul so much? It’s been an issue for the last two or three seasons.

Some of it is just getting greedy when you see the ball. Some of it is giving up on playing solid defense and trying to go for the quick steal, not using our feet as much as we should be to get in front of our man. It’s more of a cop-out defense at the end of a drive. We’ve gotten a lot better since the first 10 games, when we were getting killed in the free throw difference. Our record has gone along with that.

You guys are playing heavy minutes with the David Lee/Carl Landry combo on the front line. Neither of those guys has been known as a good defender during their careers. Are you surprised how much the team is leaning on that pairing? Is that a worry? How have they done so far, and what happens when Bogut gets back?

Yeah, it’ll be interesting to see how the rotation goes. Obviously, those guys, offensively, are threats every single possession. Defensively, they do give up a little size and rebounding in the paint. We’ve gone with that lineup in the fourth quarter the last couple of games, and the other team has scored a lot of points in the paint. So as guards, we’ve got to do our job of keeping guards out of the paint, and then they’ve gotta be physical. It hasn’t really hurt us that much, especially as long as we’re executing on the other end.

How come you guys shoot so few corner 3s? You’re 28th in corner attempts per game. Is that something you’re even aware of, as a player, or is that just too weird of a stat to think about?

Ha. I had no idea. That’s attempts per game? Really?

Man, I had no idea. That’s my favorite shot. I guess I haven’t been down there, working from the top of the key.

Yeah, as a point guard, I’d guess it’s rare to find yourself down there, even if Jarrett can play the point with you at times.

That’s true. I don’t know. We do teach that if a guy drives baseline, that we need to have a corner shooter on the other side, so he has an outlet there. But we’ve been shooting the 3 relatively well from wherever we are, so hopefully we keep knocking them down.

Do you hope to join the 50-40-90 club at some point? [This is the club reserved for players who shoot 50 percent from the floor, 40 percent from 3-point range, and 90 percent from the foul line in the same season. Only seven players have accomplished this in a season in which they logged at least 1,000 minutes, and only two — Larry Bird and Steve Nash — have done it more than once. Curry has come close twice.]

I haven’t done the 50 part. I’ve been in the 45-40-90 group. It’s definitely a great goal as a shooter to reach that plateau, but it’s not the end of the world if you don’t, as long as you’re efficient and aggressive each night. I might not reach that plateau. I think only Steve Nash, Larry Bird … and …

Dirk has done that?

Yeah. Nash is the only one to do it more than twice.

Yeah, so you can see how hard it is — he was MVP two years in a row. It’s a tough goal to reach.

You do seem legitimately angry when you miss even one or two shots in warm-ups.

Today especially. This was probably my worst shooting session of the year. [Curry then went out and lit up the Nets for 29 points on 10-of-19 shooting, including 5-of-9 from deep.] You have to compete with yourself. I want to be perfect out there.

When I watch you guys on film, it looks a lot of times like Andris Biedrins actively moves out of passing lanes and into driving lanes — that he sort of gets in the way. Is that an issue, or am I imagining things?

Well, when we run pick-and-rolls, he’s starting to get a lot better — like he used to be. He’s rolling into space now to try and be an outlet for you. He’s gone through a rough couple of years offensively, and he’s still working through those things. But I wouldn’t quite say he gets in the way or he’s clogging things, since he’s showing himself now for the ball.

Last thing: What’s the goal for this team? Obviously, the postseason would be a goal, but as your record gets better, do you let yourself think beyond that?

Shoot, if you look at the way the franchise has gone over the last 20 years, getting into the playoffs would make our fans so excited. I think we’ve only done it once in the last 20 years. [Actually twice.] That’s kinda ridiculous when you think about it. So that’s really the first goal.