Q&A: Gordon Hayward on Getting Love in Utah and the Chase-Down Block 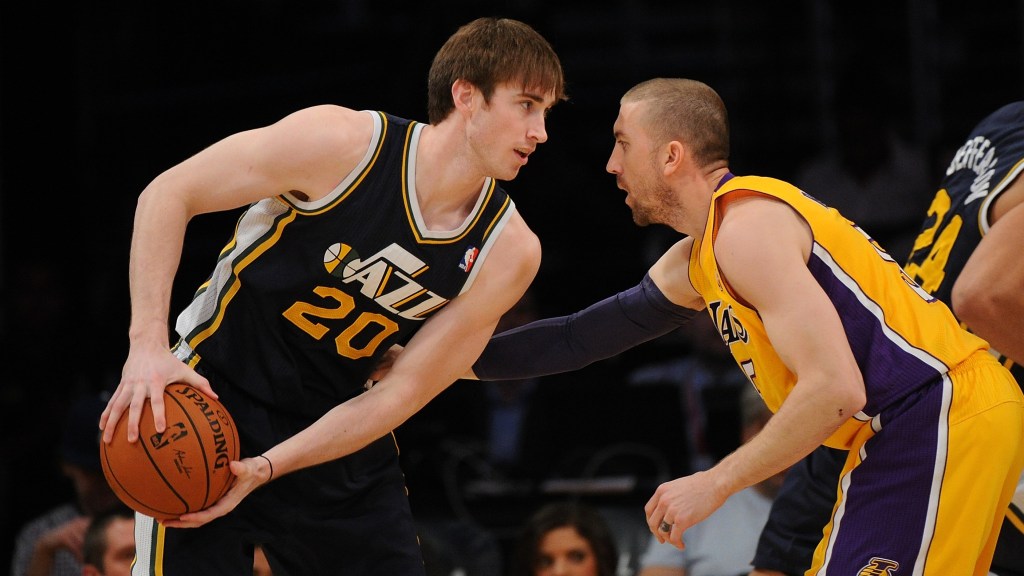 It has been a predictably tough year for Gordon Hayward, thrust into a no. 1 role on a rebuilding team that let its starting front line walk in exchange for cap space it used on fringe players. Hayward has proven well-rounded, but his shooting has suffered badly in the face of increased defensive pressure; he has flirted all season with joining the dreaded 39-29 club for shooters who check in below 40 percent from the floor and 30 percent from 3-point range.

He’s a skilled pick-and-roll passer, but also one prone to wayward drives and turnovers. Hayward has coughed the ball up on 23 percent of the pick-and-rolls he has finished with a shot, turnover, or drawn foul, per Synergy Sports; of the 146 players leaguewide who have finished at least 50 such plays, Gordon’s turnover rate ranks 124th.

None of this is shocking considering the state of the Jazz, who have had a weird season. They’ve been competitive when all five of their starters have been available, but by slotting Marvin Williams in as the starting power forward, Tyrone Corbin, the team’s head coach, sacrificed a chance to see what the Derrick Favors/Enes Kanter pairing could do over a full season against starters. The team has struggled on both ends with the two bigs playing together after doing well defensively last season, and it is on pace to play fewer such minutes this season — sort of remarkable considering the departures of Al Jefferson and Paul Millsap.

Hayward sat down with Grantland in New York last week to discuss Utah’s growing pains and all things Jazz.

I was listening to a podcast you did with David Locke, the team’s great radio guy, and you mentioned to him that you had learned a lot from losing this season. I wanted to ask, what kinds of things, specifically?

Just the experiences you get from making mistakes, so that you can not make them again. You learn what you did wrong. You look at film, and see the wrong way of doing things — versus watching games you’ve won, or watching other teams, and seeing the right way.

When you watch yourself on film, do you watch more offense or defense?

Click here for all of our interviews with fascinating people from the worlds of sports and pop culture.
A little bit of both. We have clips after every game. It’s always a variety of both offense and defense. A lot of them are away-from-the-ball defense things that we’re all trying to get better at. That’s where the majority of my clips are defensively. Offensively, it’s just little things.

I was going to ask you what the hardest part of NBA defense is. Sounds like, for you, it’s off-the-ball things — which might surprise some people.

For me, being a wing defender, a lot of teams are really good at running side pick-and-rolls, and that puts the weakside wing defender in a bind.

Like, you have to run in, bump the big guy rolling to the rim, and then find your guy again?

Yeah. We’ve struggled with that as a team. We’ve tried to change up the way we’ve guarded things. But against the teams that run it correctly — the Spurs are really good at it — it’s just a tough thing to guard. A good point guard can come off a pick and make a straight-line pass to that corner 3-point shooter — it’s just really hard to run in and help on the roller, and run back out to close out onto a shooter. That’s what a lot of my film clips are on.

You guys made a change earlier in the season so the big men guarding the screener drop back instead of rushing out at the ball. Does that help you more?

We’ve done that more so that we don’t have to be stuck in rotations, so the wings won’t have to help as much on the roller. If you’re gonna have a big guy who’s dropping down, he can kind of play two guys at once, and you’re giving up a midrange runner or floater to the point guard. That’s what we’ve been trying to do.

Are you surprised the core five young guys — you, Trey Burke, Derrick Favors, Enes Kanter, and Alec Burks — haven’t played much as a lineup? I don’t think you guys have cracked even 50 minutes together. [Editor’s note: They’re actually at 52 after Monday.] That’s an intriguing group, right?

Yeah, it is. I don’t know if I’m surprised. It’s just whatever Coach has felt like has given us the best chance to win games. And for whatever reason, with that lineup, it hasn’t been the case.

It doesn’t matter to me. It’s all just about matchups. The 2 and 3 are basically the same thing.

I remember bigger small forwards used to really go at you in the post. Shawn Marion, especially. Do you think you can deal with that better now?

I mean, we’ll see again tonight. Melo might be the best at taking small forwards into the post. But for the most part, I feel confident holding my ground down low. And a lot of times, we’ve been switching shooting guard through power forward.

Yeah, with that starting group, you, Marvin [Williams], and Richard [Jefferson] can switch everything at times.

That’s been really nice for us, and caused some problems for the other team. But I’m confident in being able to hold my ground.

Who is your top competition for the honor of King of the Chase-Down Block?

Competition? I think LeBron sets the standard on that.

I feel like he’s dialed it back a bit, and that people are afraid of him now.

Then I don’t know. I really don’t see that many of them. For whatever reason, guys just let people go. I always try to go for it.

He’s a good one. He’s really good at that.

What’s your favorite one so far?

Probably Chris Paul my rookie year. I mean, I got Chris Paul. That’s a big name.

I don’t remember that one. I have to look it up on YouTube.

Yeah, you should look that one up.

Did you ever think it was possible the team could let Al Jefferson and Paul Millsap go, but that Kanter and Favors would end up playing fewer minutes together than they did before?

We’ve started to play them together again a bit recently. But, I mean, I think Coach likes being able to stretch the floor with Marv and have just a single post guy in there.

When you run the pick-and-roll, do you feel that extra space?

Being the no. 1 option has been tough for you so far. You sounded down during some interview I saw recently. Is it more draining than you expected? About the same?

I just haven’t shot the ball as well as I wanted. It’s different. Guys aren’t leaving me that much. I’m getting different shots — shots that I’m not used to taking.

Like we discussed earlier, a lot of teams are starting to do the center-field type of defense on the pick-and-roll, so you’re getting midrange floaters.

Very tough. And those are shots I honestly don’t like taking. I’d much rather get other people involved, and when teams do that, they kind of force the guy coming off the pick-and-roll to make a decision and shoot. It’s just a two-on-two game, which is difficult on me. I’m just not used to shooting that shot as much.

Your turnover rate has been pretty high on the pick-and-roll. Is there any particular pass you have a tough time with? Any spot on the floor where you find it tricky to work?

Did you really snub Brad Stevens after the Celtics beat you guys this season?

Yeah, I didn’t shake hands with him after we lost.

Did you ever hear from him about that?

He didn’t say anything. He knows the deal. I was pretty upset after that game.

Do you find it weird playing with Derrick now? The franchise made a clear long-term commitment to him, but not to you. Does that feel strange, having to go about day-to-day work?

I mean, I know Washington extended John Wall almost as soon as they could because they just wanted to let him know: “You’re our guy.”

It’s a business decision. I’ve been around enough to know that’s what the NBA is. For whatever reason, we didn’t reach an agreement. It wasn’t a weird feeling for me.

Were you ever in the room with team officials after the exit meeting, or was it just your agent, Mark Bartelstein?

I was in the room for the exit meeting, and that was it.

Do you know what to expect this summer in restricted free agency?

I don’t. I’ve never been through anything like this. I’m gonna be open-minded and let Mark take care of that for me.

Had you been in Utah before joining the Jazz?

We played there in the NCAA tournament. That was the only other time I think I had been.

Yeah. Salt Lake is nice. It was an easy transition for me, being from Indianapolis. They’re both smaller cities. Demographically, it’s kinda the same. It definitely made it easier, especially since I lived 20 minutes from my house during college. I’ve never really left the nest. So going to Salt Lake was a lot easier than it would have been going to New York or L.A. or Chicago or some big-time city.

Have you been to Zion National Park yet?

I have not. I don’t even know what that is.

I keep hearing about Southern Utah. I gotta go there at some point.

We stayed at a bed and breakfast there, and when the owner found out I wrote about the NBA, he immediately went into the basement and retrieved a ball autographed by the 1998 Jazz team. He couldn’t stop talking about the Jazz. It’s crazy how much they love the team.

They love the Jazz. That’s one thing — whether we’re winning or losing, they’re always gonna support us. We love ’em.