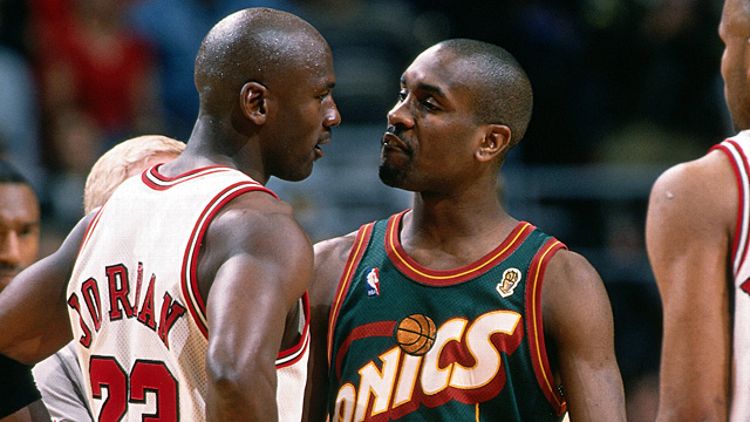 Gary Payton has a hell of a basketball résumé. Almost certain to be a Hall of Famer, Payton was the only point guard to ever win a Defensive Player of the Year award. He was an All-Star nine times, named to the All-Defensive first team nine times, and picked up a ring in 2006 with the Miami Heat.

He’s remembered for being one of the greatest trash talkers of all time.

That gift of being a master conversationalist has paid off for Payton in his post-playing days, too, working as an in-studio analyst as well as appearing on various sports shows as a panelist. After a recent interview discussing Payton protégé DeMar DeRozan, the conversation turned to GP’s playing days. This is what happens when you have a willing Payton on the phone, laughing and talking a mile a minute while being open to answering questions about the good ol’ days in the NBA. What follows is the best of GP.

How do you stress the importance of defense to younger players who come into the league?

When you play defense what happens is everybody pays attention and they start talking about how you’re the stopper, you can stop this guy. All of a sudden your game gets better on the offensive end and you become that versatile guard that everybody wants. That’s what Kobe did for a long time. He did it on both ends of the floor. That’s why he made All-Defensive teams, that’s why he was on the offensive teams … Even if you have a bad game on the offensive end, if you have a good game on the defensive end and you get a lot of steals, you’re going to get two or three easy baskets, that [can be] nine … points you never expected to have and you turn that bad game into an OK game.

You work with so many young guys; have you ever thought about getting into coaching?

Click here for all of our interviews with fascinating people from the worlds of sports and pop culture.
You know what? Coaching is something I really would do. A lot of people don’t think I’m serious about it. I like working with the kids. When you work with the guys one-on-one and get them to understand it’s a little bit better. That’s the way I was taught by Tim Grgurich. That’s how he taught us. When he taught us one-on-one it gave us more of an ability to learn things instead of him being a coach out on the floor saying, “You do this, you do that.”

How rewarding is it for you to watch the guys you’ve mentored grow as people?

It’s the same with Jason Kidd. Everybody knows I raised him, too. I had Jason, Jason was from Oakland, too. I had Jason when he was 13. He wanted to hang out with me all day, every day. To see those guys become men, as little kids when they were only 13, 14, 15 years old, is a big thing to me. It gives great satisfaction to me because I was involved with their lives. These are my kids, my guys. I’m getting a lot of interviews about the kids who went to my camps in Seattle. They would be with me in the summer, and people are talking about them [now] because they’re making their game better and they’re growing up as men.

Is it tough to work with guys and not be playing yourself, or do they help you deal with not playing by keeping you in the gym?

With me, I was a little bit different. I don’t miss basketball because I’ve already got in my mind that I did what I had to do for 17 years. I think I’m satisfied with what I did. Now that I can come and go with the kids, my guys that I’ve worked with since they were little kids, all I’m doing is telling them to play the same way. Play the game the way you know you can play the game and don’t look back on anything else. Don’t ever have a doubt in your mind that you could have done it in a different way.

What’s the best advice you’ve been given, in terms of basketball or life?

When I started at Oregon State and I played for Ralph Miller. I guess I was having a bad practice and I had been on a streak of 15 games in a row where I had averaged about 26 or something. I didn’t want to practice one time and he told me, “If you think that you’re that good in this game that you’ve gotten to your peak at this level, you need to hang your basketball shoes up right now and give up basketball.” I thought about it and I said, “Whoa, if I hang up my shoes right now and give up basketball I haven’t accomplished nothing.” He told me, “There’s going to be somebody out there that’s going to be better and want to get your spot every day because you’re going to be at the top of the heap and they’re going to want to bring you down and be at your top.”

When I was in the league and I took over for John Stockton, everybody was trying to knock me down. The Stephon Marburys, the Steve Francises, the Jason Kidds, they were all trying to come at me. Every night they wanted to play, every night they came to play against me they were trying to make a statement: “I know you good, but I’ma be better.” I said, “Hey, if that’s the case I’m going to work out every summer and every year to get better and better, not to just say, ‘Hey, I’ve made it here and I’m happy where I’m at’; I’ve got to get better and better so I can keep this.”

Who was your favorite guy to play against?

John Stockton. I idolize him now to the fullest. I think he was probably … not underrated, but everybody thought he wasn’t the guard to go against every day, that he was probably easy. They thought he was dirty. He was a guard where he wasn’t as athletic as us, he did it as basic as he had to. He set hard picks. People were mad because they knew he set hard picks, but they always got caught on them. We weren’t as smart as him. We were so big-headed thinking we could be more athletic than him and he would get us out of our game. We would get mad, get techs, and be sitting on the bench while he would never say nothing to no one. We’re good friends to this day. It’s just one of the things that I admire of him.

Who was the toughest player to face?

That’s hard. That’s really hard. In my day I think the toughest was Derek Harper. The old-school Derek Harper. He was tough. He had the most toughest, nastiest game ever. I hated playing against him because he would always try to rip you, and try to talk to you. People just didn’t really know that about Derek Harper. I used to hate bringing the ball up against him, really.

Well now we need to know, who has taken over as a trash-talker in today’s game?

Nobody. It’s no more trash-talking. There’s nobody. No one. No, no, no one. No one does it like we used to do it in the old days. You’ve forgotten. The NBA has changed a bunch of rules. You can’t really say anything to nobody. You’re going to get techs, you’re going to get fined, you’re probably going to get suspended.

Just like what happened to Steve Blake from the Lakers, he went to the stands and said something to [the fans]; he got fined $25,000. I used to do that to fans every game. That was how I used to get juiced up for the game. Talk to the referees, that’s how I used to talk. Today, nobody talks trash anymore. They can’t. They don’t want to lose their money. Our technicals were only $500. Now they’re $1,000 or $1,500 or whatever. [Note: Technical fouls now start at $2,000 and can be up to $4,000 depending on how many a player has been assessed.] It’s too much now. These guys are not trying to give their money away like that.

Which current guys, besides the ones you work with, do you enjoy watching?

I like Blake [Griffin], he dunks a lot; I love Jamal [Crawford], he’s doing the crossover, he’s doing the old-school stuff. A guy that I really like is [John] Wall from Washington. Yeah. That’s becoming one of my guys. One of my kids. He tweeted me and asked for my number and I called him and we’ve been tight ever since. He’s a kid where I like him because he called me to ask me how to get better at playing defense and how to become a good point guard. That’s the type of stuff I’m saying. Some of these kids nowadays their egos are too big to go to old-school guys and say, “I need to know about my ability and how can I get better.” Once he did that, it was a lock for me and him to become really close.

Holly MacKenzie (@stackmack) covers the Toronto Raptors for Sportsnet.ca and the rest of the NBA for various sites and magazines.