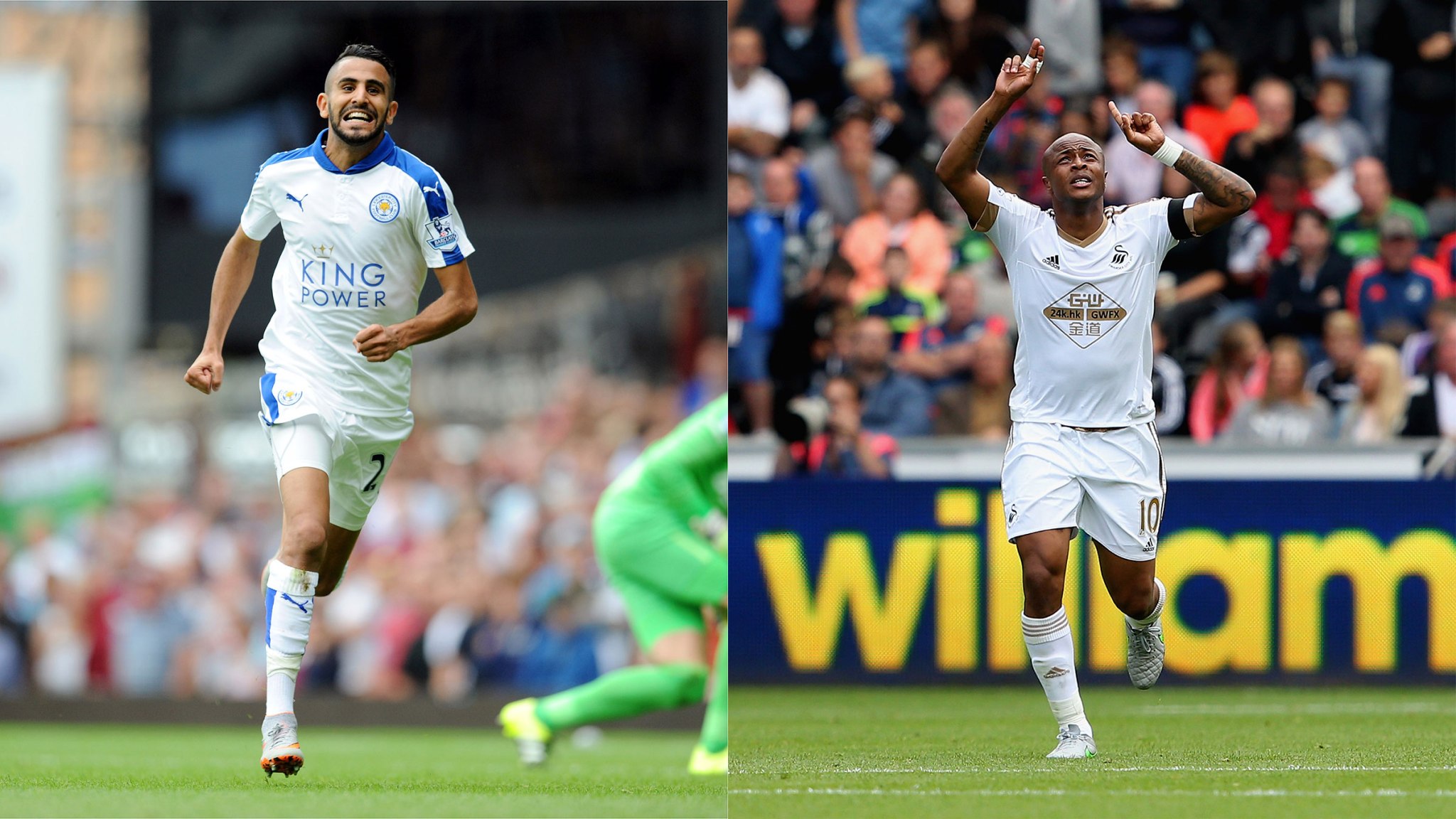 How to hang around the top of the Premier League while grabbing plenty of neutral support along the way? Five games into the season, the answer appears to be: “Get yourself a tricky winger.”

So far, Swansea and Leicester City have combined for five wins, four draws, and one loss — all while playing some of the most fun-to-watch soccer in England. Riyad Mahrez has led Leicester, a team that came into the season looking like possible relegation fodder (oops), to the only undefeated record outside of Manchester City. Eleven points from five games is one heck of a haul, and it’s probably enough to permanently remove them from relegation talk. Meanwhile, Andre Ayew has helped propel Swansea to a draw against Chelsea and a win against Manchester United.

There’s no better way to sum up the pair’s outsize impact than this: After a summer of record transfer spending across the country, two of the most influential players in the Premier League cost less than £1 million combined.

How can you not love this?

Riyad Mahrez and a team of firemen racing to the wrong fire https://t.co/fZrv6PEWPJ

Wingers who can consistently turn defenders around and then plant one into the top corner are the hardest players to find on the cheap. Yet Mahrez never got a sniff from a top-tier club, ultimately joining Leicester from second-tier French club Le Havre for less than £1 million while the Foxes were still in the Championship. But through five games, he’s putting up the kind of numbers that make it seem like only a matter of time until a club with top-of-the-table aspirations comes calling with plenty of cash in hand.

With Mahrez, the biggest concern is simply that all of this sizzle just can’t continue. His hot start to the season has come against Sunderland, West Ham, Aston Villa, Bournemouth, and Tottenham Hotspur — not exactly a who’s who of the Premier League elite.1 His four goals this season already match his total output from last season, and his two assists fall just short of last year’s tally, too. Plus, the combination of scoring on 23.5 percent of his shots while shooting from a relatively-far-away average of 19.1 yards tends to sound the “unsustainable” alarm.2

But fear not, Leicester fans. Beyond the goals and assists, Mahrez is doing lots of other really good stuff. Even if the goals stop flying into the corner, he’s still been shooting 3.74 times per 90 minutes, up from 2.55 last year. Because of the increase in volume, his expected goals have taken a jump from 0.22 to 0.42, which is a stellar total for a player who’s more winger than forward. Last season, the only non-forward to crack the 0.40-expected-goal-per-90 rate was Arsenal’s Alexis Sánchez. Whether it’s due to a tactical change under new manager Claudio Ranieri or just the development of Mahrez’s game, his increased goal threat is supported by underlying numbers — and not just a few lucky cracks from distance.

When it comes to Mahrez’s creating, the story is similar. Beyond his two assists, he’s also creating 2.64 chances per 90, tied for eighth among Premier League players with at least 300 minutes. He’s tried to take on defenders more often than anybody in the league (7.26 times per 90), and he’s done it successfully a phenomenal 66.7 percent of the time. He leads the league in successful dribbles per 90 (4.84), and other than Tottenham’s Mousa Dembélé, no other player in the top 20 of dribbles attempted has completed as high a percentage as Mahrez.

Unlike Mahrez, Ayew came to England as an established name. Only 25, he’d been a member of both Marseilles3 and the Ghanaian national team since 2007, and a mainstay with both sides since 2010. Any questions about his effectiveness in the Premier League weren’t concerned with his skill, but rather with his ability to adjust from the high-flying, frantic-pressing style of last year’s Marseilles to Swansea’s much more controlled, possession-oriented attack. Well, he gave us an answer on the first day of the season against Chelsea:

Swansea has a history of pairing a target striker with a classic no. 10 and two very speedy wingers to attack the flanks. But Ayew breaks that mold just slightly. While wingers Jefferson Montero, Wayne Routledge, and Nathan Dyer (who was loaned to Leicester City over the summer) typically stay wide, Ayew is happy to drift into more central positions to pick up the ball: 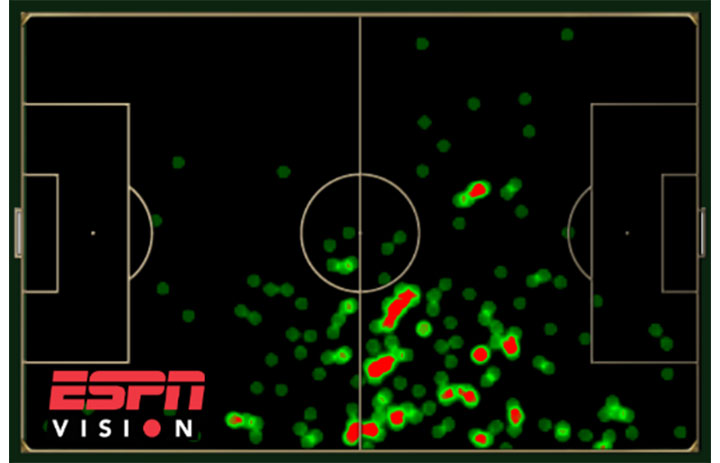 Ayew is also comfortable playing as a second striker, either pairing with or playing just behind Bafetimbi Gomis. His versatility provides manager Garry Monk with more tactical flexibility than he’s had in the past, and Monk has already put it to good use. On August 30, while trailing Manchester United 1-0, Monk subbed Routledge for central midfielder Ki Sung-Yeung and switched from Swansea’s usual formation to a narrow 4-4-2 with four central midfielders behind Gomis and Ayew. After the shift, Ayew scored one goal and assisted on another. Postgame, United manager Louis Van Gaal directly credited Swansea’s change for the goals.

Ayew has three goals and a sky-high shooting percentage of 23.1 percent.4 In contrast to Mahrez and plenty of other goal-scoring wingers, though, Ayew hasn’t been shooting from distance. So, while he’s averaging only 2.53 shots per 90 minutes, he’s constantly getting into good positions, as we see in his average shot distance of only 14.8 yards. Put it all together and you get an expected goals per 90 of 0.47 — even better than his Leicester counterpart.

With eight points, Swansea sit in eighth place — the same position they finished in a season ago. However, last year they outperformed their numbers by conceding almost 12 fewer goals than their expected-goals-conceded tally. This year, their underlying numbers look much better, as they’re fifth in expected goals, compared with 16th in 2014-15. Coming into the season, Swansea were a team whose stats suggested they would drift toward the bottom of the table, but five games in — thanks in no small part to Ayew’s efficiency and versatility — they look like they’re here to stay.

Ayew has kept Swansea from falling, while Mahrez has already pushed Leicester beyond preseason expectations. And as a pair of aggressive and unconventional attackers, they’ve been two of the Premier League’s most entertaining players thus far. Now, it might be asking a lot for them to keep up their current pace, but that’s the beauty of the small-yet-successful sample: We have plenty of time to watch them try.

'The Ropes' Podcast: Mayweather-Berto, PED Controversies, and an Interview With Virgil Hunter